A new report argues that dropping human rights conditions will yield better security ties with Central Asian regimes. But those conditions are largely ignored already, and the results aren't pretty. 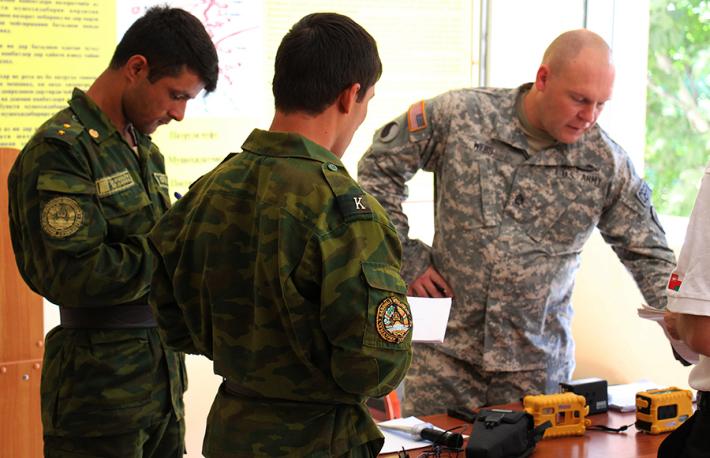 A new report argues that dropping human rights conditions will yield better security ties with Central Asian regimes. But those conditions are largely ignored already, and the results aren’t pretty.

Last week, the Carnegie Endowment for International Peace released a report intended to ground U.S. policy toward Central Asia in “a realistic view of the region and U.S. interests” that will “better serve everyone’s interests.”

The report does not deny the facts of systemic corruption and repression in Central Asia, but among its recommendations is this piece of blunt advice: “Do not condition security cooperation on human rights performance.”

One has to give the authors credit for making plain what often goes unsaid in U.S. policy circles. They do so again when the report later cites the example of the Middle East—approvingly—as another region where the United States “gives priority to security over values.” Indeed, the document’s appeal to realpolitik seems to suggest that the U.S. government hasn’t been able to cooperate enough with Central Asian states on security due to an excess of human rights restrictions. But as the report itself acknowledges, the United States has actually cooperated quite a bit with Central Asian regimes on security, and it has achieved very little by doing so.

An argument for more of the same

A recommendation to drop scrutiny of U.S. cooperation with Central Asian security services seems especially strange given the events of this year. In May, Colonel Gulmurod Halimov, the head of Tajikistan’s special police unit OMON, left his post to join the Islamic State (IS) militant group in Syria. As the Wall Street Journal has reported, Halimov participated in five different State Department trainings, including in the United States, before taking his talents to IS.

Human rights activists have been urging Washington to rethink its cooperation with the Tajik security services for years, for instance in the aftermath of a July 2012 military operation in the middle of Khorog, a regional capital, that killed several dozen people, including an unknown number of civilians. Two opposition leaders from Khorog disappeared into the custody of the state security service (GKNB) during the fighting; one turned up dead, and the other reappeared after two weeks in a GKNB facility in Dushanbe, where he was tried and convicted of engineering an uprising.

This August, the authorities banned the main opposition party, the Islamic Renaissance Party of Tajikistan (IRPT). Since then, many of its leaders and members have been arrested, with perhaps 200 now behind bars amid allegations of torture. Two weeks before the IRPT was banned, the U.S. embassy in Dushanbe put out a press release announcing the donation of $1 million worth of equipment to Tajik agencies including the GKNB, which oversees a border guard service that the Carnegie authors acknowledge is complicit in rampant drug smuggling. Too much conditionality on security cooperation does not appear to be hampering the U.S.-Tajikistan relationship.

The Carnegie report advises the United States to focus on Uzbekistan, the region’s military power, as a site for special cooperation. The argument here is perhaps even worse than for Tajikistan. The authors cite the release in November of a political prisoner, Murod Juraev, as a success story for “quiet diplomacy.” Juraev had been held for 21 years and emerged from prison “a skeleton,” according to his family. There are still dozens of political prisoners in Uzbekistan. Earlier this month the world learned that Akrom Yuldashev—a religious figure, jailed since 1999, whom the authorities blamed for inciting a 2005 confrontation in Andijan in which government forces killed hundreds of civilians—died in prison in 2010. The government had not told anyone about his death, apparently including the U.S. government, despite the fact that his family and human rights activists had been seeking information about him for years. In 2012 the International Committee for the Red Cross stopped visiting Uzbek prisons, saying authorities’ persistent interference with their work rendered the visits “pointless.”

Bending their own rules

The United States has laws that set conditions for cooperation with potentially abusive governments. But all too often, the U.S. government itself fights hard to skirt its own weak restrictions.

Legislation known as the Leahy Law requires the government to vet individuals and units that would receive training and assistance from the United States for gross human rights violations. In theory it should provide a strong check on cooperation with human rights abusers. But in practice the Leahy process demands a heavy burden of proof. It requires credible information about violations that can be attributed to specific units or individuals, which is hard to obtain in countries without independent media or judicial systems, and where the units to be investigated are often the police or prosecutorial services themselves. The investigators tasked with proving violations also work with U.S. personnel who manage—and have an incentive to maintain—security assistance programs. The same flawed process applies to the Arms Export Control Act, which forbids the use of U.S. military assistance for internal security operations, among other things.

Skilled embassy officials who see their task as supporting the security relationship with the host government can manipulate the bureaucracy to overcome inconvenient oversight problems. A 2015 inspector general report on the U.S. embassy in Tajikistan found that when the State Department submitted questions as part of a review of Arms Export Control Act compliance following the Khorog events, the embassy allowed Defense Department personnel to write its answers in State Department cables. State Department officials “from four bureaus” expressed frustration with the replies. The ambassador at the time finished her stint in Dushanbe and is now at the military’s United States European Command.

Another human rights mechanism that can be dodged is the Trafficking Victims Protection Act, which requires the U.S. government to evaluate a country’s performance on combatting human trafficking. Countries that fall into the worst category, Tier III, are subject to sanctions, but they can receive a national-interest waiver from the president, as Uzbekistan did in 2013 and 2014. In the State Department’s 2015 trafficking report, Uzbekistan was one of several countries that was designated as having “made progress” and bumped up to the Tier II Watch List, after senior diplomats overruled the more negative assessment of the department’s own analysts, according to a Reuters report. The story is similar for the U.S. Commission on International Religious Freedom’s annual struggle to win approval for its Country of Particular Concern (CPC) designations, which can also carry sanctions.

The fact that such bureaucratic battles are being waged over the likes of Uzbekistan, widely acknowledged as one of the world’s most repressive nations, is telling. First the war in Afghanistan and now the fight against IS have “securitized” U.S. policy in the region to such a degree that no one is beyond the pale for cooperation, even security services engaged in flagrant human rights violations and grand corruption—activities that, for what it’s worth, actively undermine official U.S. policy goals.

Just as in the Middle East, Washington’s carefully cultivated relationships with brutal regimes will be tested over the next several years as Central Asia faces a dire economic crisis that is being hurried along by the corruption and violence of the region’s governments. Now is not the time for the United States to double down on a dangerously shortsighted understanding of security.