In His Own Words: How Biden Can Revive Global Democracy

The United States must condemn abuses, support rights defenders, and lead by example. 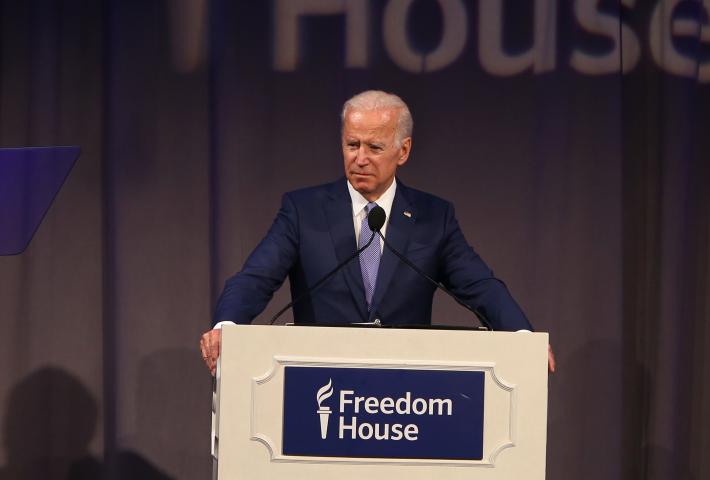 Today Joe Biden will take the oath of office and become the 46th president of the United States.

Biden has promised to put revitalizing democracy at the forefront of his agenda. Given that global democracy has been in decline for 14 consecutive years, the need for this change in priorities is urgent.

In 2018, former vice president Biden spoke at the annual Freedom House awards dinner as that year’s Leadership Award winner, making several key points that we hope will be carried into his presidency.

“Freedom House and others here tonight are fighting what I was taught was the greatest sin of all … the abuse of power.… That’s what led me into politics and many of you into this organization in the very first place. For me as a kid it was civil rights, watching the school bus go by my grade school, Holy Rosary, in the fourth grade and asking my mom, ‘Why are all those Black kids on that bus not stopping?’ Because my state was segregated by law. It just didn’t sit well.”

In discussing the abuse of power, Biden also cited his experience meeting Slobodan Milošević, the authoritarian former president of Serbia and Yugoslavia.

“When I met with him, he asked me … ‘What do you think of me?’ I said, ‘I think you’re a damn war criminal and I’m going to spend the rest of my career seeing you’re tried as one.’”

Milošević was eventually indicted for war crimes by the International Criminal Tribunal for the Former Yugoslavia and died while on trial in the Netherlands.

The importance of standing up to illiberal foreign leaders cannot be overstated. In order to restore global democratic norms and renew faith in US leadership and solidarity, we urge the Biden administration to commit to confronting current autocrats like Turkey’s Recep Tayyip Erdoğan and China’s Xi Jinping, who are collectively culpable for countless human rights abuses around the world. Just last month, Erdoğan’s Justice and Development Party passed a new law that further restricted freedom of association in the country, underscoring the need for repressive regimes to be checked by the world’s democracies—particularly when, as with Turkey, the perpetrators are ostensibly US allies.

Supporting those who support democracy

“All around the world, activists and advocates and everyday citizens—mothers, teachers, journalists, neighbors—share a bone-deep conviction that the world can be made better.… We want the centers and activists and all those who stand up for what is right regardless of what it costs them personally to know—and it really is important that they know—that we’re listening. That we know what they’re doing. If you want to stop progress, stop listening. Let those who struggle continue to believe that they’re all alone.”

Just as denouncing abuses is crucial to stamping them out, so too is showing support for those working on the ground to prevent, document, and punish such violations. We urge the Biden administration to consistently encourage democracy advocates in perilous places like Hong Kong, and come to their aid when they face reversals. A successful effort must involve coordination with partners and the creation of actionable plans to assist rights defenders.

Equally essential is the simple act of applauding successes. For example, mass protests in Malawi last year led to a historic rerun election that forced incumbent president Peter Mutharika, known for evading the rule of law, out of office. The experience demonstrates the power of civil society and shows what is possible when a country’s institutions uphold democratic practices. Triumphs like this deserve international recognition and amplification to encourage similar progress elsewhere around the globe.

“I’ve been doing this my whole adult life. I promise you one thing I know for certain, as long as I’ve been engaged: The world has looked to us as a symbol of hope, with all our transgressions. Ours is a spirit that goes freely through the world and inspires others to join in the cause of defending liberty.”

“That’s why we have to continue to stand as a bulwark for liberal democracy and freedom around the world. It’s who we are. It’s how we became the nation we’ve become.”

If the United States is to continue leading by example and inspiring others to work toward democracy in their own countries, it must reaffirm its commitment to the principles upon which it was founded—in short, that all people are created equal and possess inherent rights and freedoms. This commitment must include consultations with diverse civil society groups on the troubles facing American democracy today and the reforms needed to address them.

The incoming administration has an opportunity to make great strides in restoring democracy around the world. This is an idea that is popular with Americans across the political spectrum. In 2018, Freedom House worked with the Penn Biden Center and the George W. Bush Institute to commission a series of focus groups and a national survey examining American attitudes about democratic principles. Sweeping majorities want to live in a democracy, and they endorse US support for democracy overseas.

To ensure that this effort is credible and sustainable, we urge administration officials at every level to recognize that they must not only push back on antidemocratic forces abroad, publicly support democracy’s ardent defenders, and tend to the weaknesses of American democracy, but do all three simultaneously. Immediate progress on each front is necessary to meet the challenge before us.