Freedom House's Tiseke Kasambala discusses the state of democracy in Africa where, in spite of the global decline of democracy, many countries are showing hopeful signs of resilience. 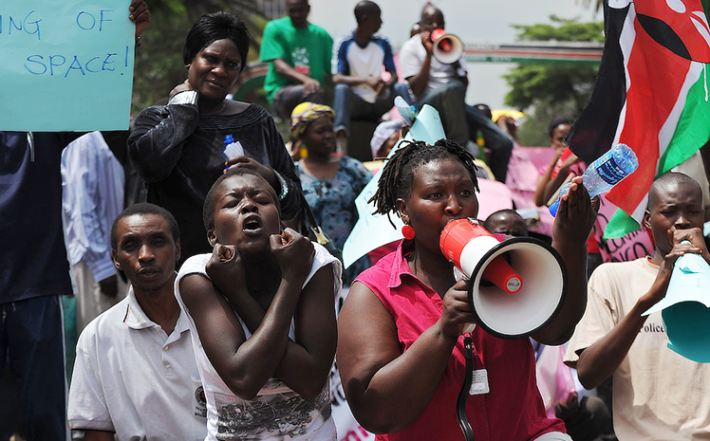 According to our Freedom in the World 2022 report, the world’s citizens have encountered 16 consecutive years of decline in global freedom. While Africa is not immune from this pattern, African countries have also showed signs of improvement and resilience. In August, as Angolan and Kenyan voters cast their ballots, we interviewed Freedom House's new director of Africa programs, Tiseke Kasambala, to learn more about the state of democracy in Africa and what citizens are doing to defend and extend democratic rule.

Q: To begin, how would you describe the state of democracy and civil society in Africa?

There are some positive and encouraging developments for democratic governance on the continent. Zambians overcame a repressive political environment to elect opposition presidential candidate Hakainde Hichilema last year. In Tanzania, President Samia Suluhu Hassan has expanded the civic space by reversing some of the restrictions imposed by her late predecessor, John Magufuli. Additionally, Africans express a stout preference for democracy when they respond to Afrobarometer’s surveys.

That said, challenges currently appear to outweigh the continent’s success stories. Residents of the Sahel region and parts of the Horn of Africa face continued insecurity, instability, and armed conflict. Recent clashes in the Democratic Republic of the Congo (DRC) bode poorly for elections next year.

This instability is fueling a renewed trend of militarization, which was a trademark of continental politics in the 1970s. The military has increasingly dominated African capitals in recent years; the governments of Sudan, Chad, Mali, Burkina Faso, and Guinea have all been overthrown in the last two years, while the government of Guinea-Bissau survived a February coup attempt. Sudanese general Abdel Fattah al-Burhan dissolved a transitional government that succeeded the dictatorial regime of Omar al-Bashir, while former general Mahamat Idriss Déby unconstitutionally leads a military-dominated transitional council in Chad. Former officers also hold government posts in the DRC, Zimbabwe, and elsewhere.

Several governments have introduced, or attempted to introduce, laws and regulations that target civil society and civil liberties. Cybersecurity laws that violate privacy and free expression, broad antiterrorism laws that curtail free assembly and association, and laws that limit nongovernmental organizations have been introduced in countries like Eswatini, Uganda, and Zimbabwe.

Finally, African elections remain zero-sum games. The stakes are often very high, as the political elite compete to control valuable natural resources. Many leaders cling to power by rigging the vote, circumventing term limits, or targeting the opposition. Last year, Tanzania’s Hassan administration arrested a prominent opposition leader on terrorism charges; he was only released in March. In Côte d’Ivoire, Alassane Ouattara is serving a third presidential term after changing the constitution. Rwandan president Paul Kagame recently indicated that he would seek a fourth term in 2024; thanks to constitutional changes enacted in 2015, Kagame could remain in office until 2034.

Q. The African Charter on Human and Peoples’ Rights is one of the world’s most progressive human rights instruments. How well do African countries respect human rights norms and enforce antidiscrimination laws?

Unfortunately, adherence to the charter remains a challenge for many governments. Antidiscrimination laws that do exist are not well enforced.

South Africans, for example, initially enjoyed a wide range of freedoms thanks to a strong constitution and democracy-guarding institutions. However, enforcement of the constitution’s provisions is weakening; citizens consequently experience high rates of gender-based violence, xenophobia, and violence against LGBT+ people.

Although LGBTQI+ rights violations remain a particular challenge in Africa, some governments have recognized LGBTQI+ rights by reversing colonial-era sodomy laws that barred same-sex conduct. In 2019, for example, the Angolan government decriminalized such conduct by adopting a new penal code with nondiscrimination provisions. Cabo Verde, a stable democracy, has also decriminalized same-sex activity. In Botswana, a country with a historically robust democratic tradition, the Court of Appeal upheld a 2019 lower-court ruling decriminalizing same-sex relations.

Q.  Some African countries and territories, like Ghana and Somaliland, saw score increases or otherwise scored well in Freedom in the World 2022. What factors do Africa’s emerging and venerable democracies all possess?

Q:  While challenges are different across the continent, what do you believe are some barriers to democratic success in Africa?

African countries that have seen their democratic progress impeded suffer from weak institutions; a lack of political pluralism; intolerance for diverse and critical voices; the entrenchment of political elites; the absence of meaningful female, youth, and minority participation in politics; corruption; and opacity, especially when addressing rights violations. These factors lead to widespread impoverishment, instability, and conflict.

Q:  Social movements and protests have been critical to facilitating democratic success in Africa. How have citizens innovated to hold their governments accountable while facing authoritarian tactics?

Young people who yearn for reform are the continent’s biggest drivers of change. In Nigeria, young activists led the campaign against the brutal practices of the government’s Special Anti-Robbery Squad (SARS). The #EndSARS campaign went viral and, coupled with demonstrations, pressured the authorities to disband the squad. In Sudan, demonstrations led by young people, many of whom were women, resulted in the removal of Omar al-Bashir in 2019. Angolan and Zambian youths creatively challenged their governments’ authoritarian actions using social media. During the tense 2021 preelection period, for example, young Zambian protesters trekked to undisclosed locations and broadcast their activities live on social media.

Social movements that successfully mobilized communities have played a critical role in keeping the continent’s civic space open. Significantly, they challenged repressive restrictions and demanded accountability at the height of the COVID-19 pandemic. They did this through social media campaigns, court cases, and community-led monitoring mechanisms that tracked governments’ pandemic-related efforts to name a few examples.

Q. In our Election Watch for the Digital Age research initiative, the recent polls in Kenya and upcoming elections in Angola were both considered the most vulnerable, with the risk of digital interference being highlighted in both cases. How are free and fair elections threatened and what could be done to mitigate those threats?

Digital interference threatens expression and privacy rights as well as voters’ access to information. This is a notable issue in Kenya, where Deputy President William Ruto was declared the winner in this month’s presidential poll, and in Angola, where elections are scheduled for late August. But the same is also true in Nigeria and Zimbabwe in 2023. Digital repression has increased as governments respond to online activism by disrupting internet access and blocking online platforms, often during protests and elections. We have seen examples of this in Eswatini, Nigeria, Uganda, Sudan, and Zimbabwe.

The voting process itself can be marred by pervasive political intolerance. Many citizens stay away from political campaigns and polling stations to avoid intimidation, harassment, and violence by authorities and political parties. Trust is also lost when electoral authorities, which are key to ensuring efficient and credible contests, are not independent, transparent, or effective. During the 2019 elections, Malawians called for their electoral authority’s chairperson, Jane Ansah, to step down over mismanagement concerns, and the results were later annulled by the Constitutional Court. In 2020, Ansah testified that she used correction fluid on ballot tally sheets.

Ultimately, citizens will view elections as credible when their governing institutions behave credibly. That means providing an open environment for media, activists, and ordinary internet users; physical security; and fair electoral processes that are ably defended by authorities.