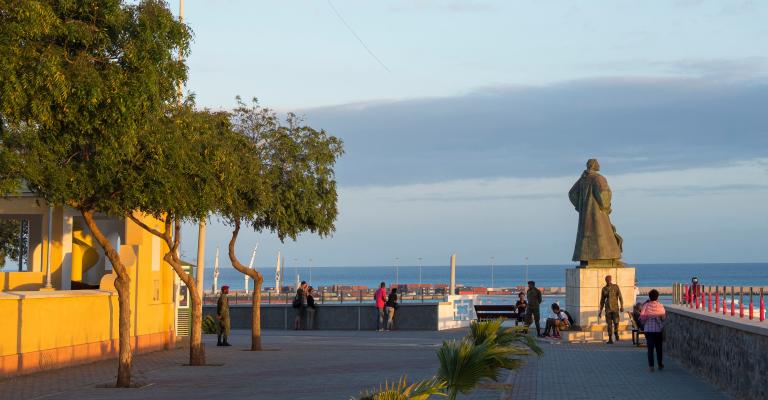 Cabo Verde is a stable democracy with competitive elections and periodic transfers of power between rival parties. Civil liberties are generally protected, but access to justice is impaired by an overburdened court system, and crime remains a concern. Other outstanding problems include persistent inequities for women and migrant workers.

The president is directly elected for up to two consecutive five-year terms. The prime minister, who holds most executive authority, is formally appointed by the president but is nominated by and accountable to the National Assembly.

Ulisses Correia e Silva became prime minister in 2016 and remained in that post after the MpD won the April 2021 parliamentary elections. In October, José Maria Neves of the PAICV was elected president with 51.7 percent of the vote, defeating MpD candidate Carlos Veiga. Neves, who succeeded term-limited incumbent Jorge Carlos Fonseca, took office in November. Observers assessed both elections as largely free and fair.

Members of the 72-seat National Assembly are directly elected in multimember constituencies to serve five-year terms. In the April 2021 elections, the ruling MpD won 38 seats, the PAICV won 30, and the Democratic and Independent Cabo Verdean Union took 4. People infected with COVID-19 were advised against casting a ballot.

The legal framework provides for fair and competitive elections. The National Elections Commission (CNE), whose members are elected by a two-thirds majority in the National Assembly, is generally considered impartial. African Union observers lauded the CNE’s performance in its report on the October 2021 presidential election.

There are no significant impediments to the formation and competition of political parties. A number of different parties are active, though only the PAICV and the MpD have held power at the national level. Groups of independent citizens have an active role in political life, participating in elections.

The opposition has a realistic opportunity to gain power through elections. There have been three democratic transfers of power between the PAICV and the MpD since independence in 1975, the most recent in 2016.

The political choices of voters and candidates are free from undue external influence. However, the functioning of public agencies is reportedly affected by partisanship.

Women have full and equal political rights and are increasingly involved in politics. Nevertheless, social constraints have somewhat impaired their participation, with women currently holding 9 of the cabinet’s 28 seats. The 40 percent gender quota for candidates required by the 2019 Gender Parity Law is often unmet, though women held 38.9 percent of the National Assembly’s seats as of May 2021.

The prime minister and cabinet determine the policies of the government, under the supervision of the National Assembly and the president. The government is able to implement laws and policies without undue interference from unelected entities.

Cabo Verde has relatively low levels of corruption overall, but bribery and nepotism are problems at the municipal level. Allegations of clientelism and graft continue to surround costly infrastructure projects and other spending measures, public procurements, public companies, and management of public lands.

The current government has taken numerous steps to improve transparency, including by publishing more information about state operations and finances online; it generally adheres to legal guarantees of public access to information. However, many officeholders fail to comply with rules requiring them to declare their personal assets and income. The government continued to communicate factual information about COVID-19.

Press freedom is guaranteed by law and generally respected in practice, though Article 105 of the electoral code prohibits media organizations from disseminating opinions on or criticism of parties and candidates after a certain date during a campaign period. The publicly owned Radio and Television of Cabo Verde (RTC) respected the right of all candidates to free airtime during the 2021 legislative election campaign period.

Publicly and privately owned media outlets are largely free of government control. However, precarious finances at many outlets can undermine journalists’ job security and their ability to undertake investigative reporting projects. A lack of funding has contributed to the closure of several privately owned newspapers, decreasing the diversity of information in the print sector.

The constitution establishes the separation of church and state, though the Roman Catholic Church receives some privileges, such as the recognition of Catholic marriages under civil law. While all religious groups are required to register with the Justice Ministry to obtain tax and other benefits, the process is not restrictive, and there are no limitations on freedom of worship.

Academic freedom is respected, and the educational system is not affected by political indoctrination.

There are no significant constraints on individuals’ freedom of expression. The government is not known to engage in online surveillance or improper monitoring of personal communications. Social media is widely used to express private and political opinions.

Freedom of assembly is legally guaranteed and observed in practice.

The constitution protects the right to unionize, and workers may form and join unions in practice. However, the government restricts the right to strike in broadly defined essential industries, and formal collective bargaining is reportedly uncommon in the private sector. Workers in the public and private sectors held strikes in 2021.

The judiciary is independent, though the courts are overburdened, understaffed, and underfunded. During the 2020–21 judicial year, the courts continued to improve their performance, though many cases remained unresolved. Under changes to the penal and criminal codes that took effect in July 2021, some criminal allegations can be adjudicated in abbreviated proceedings.

Police and prosecutors generally observe legal safeguards against arbitrary arrest and detention. Defense attorneys are provided to indigent defendants. However, due to the limited capacity of the court system, there are often delays in detainees’ first hearings before a judge, and many cases are dropped because defendants in detention are denied a timely trial.

Law enforcement officials are sometimes accused of excessive force, but perpetrators are often investigated and punished by oversight bodies. In June 2021, the president of the PAICV’s youth wing criticized the physical mistreatment of soldiers after a video depicting such behavior was disseminated online.

Cabo Verde is generally free of major crime or unrest. Nevertheless, violent crime does occur, and street crime, smuggling, and drug trafficking are perceived as consistent problems. The National Police reported that crime fell by 57.2 percent between 2016 and 2020, though figures for 2021 showed a 33 percent year-over-year increase. In September 2021, Justice Minister Joana Rosa reported a recidivism rate of over 30 percent.

The government sought to increase the capacity of law enforcement during 2021. In February, the National Police opened a criminal investigation directorate. In August, Rosa announced the creation of a data collection agency under the Judicial Police. In September, Prime Minister Silva announced that the government would restructure its security apparatus to address crime.

Prison conditions are poor and often overcrowded, but the government has been working to improve conditions, which includes changes in legislation, the implementation of a social reintegration program for prisoners, and the construction of more cells and bathrooms. In April 2021, 15 prisoners started a hunger strike in São Vicente over their treatment.

Gender discrimination is prohibited by law, but wage discrimination and unequal access to education persist for women. In November 2021, the government authorized a 2021–25 gender equality plan.

No comprehensive antidiscrimination legislation exists for the entire population. Immigrants often face discriminatory treatment in accessing papers and employment. In December 2021, the cabinet approved a draft bill on nationality that would effectively “extend the scope of nationality or origin.” That bill awaited parliamentary approval at year’s end.

Same-sex relations are not criminalized, and the law protects against employment discrimination based on sexual orientation. However, LGBT+ people are reportedly subject to such discrimination along with physical violence and verbal abuse.

Individual freedom of movement is recognized by law, and there are no significant restrictions in practice. People may freely change their place of employment or education.

Property rights are generally respected. The legal framework and government policies are supportive of private business activity, though obstacles such as corruption and legal and bureaucratic inefficiency remain a concern. Small and medium-size businesses are one of the main sources of income for families whose members are not directly employed in the public services.

Personal social freedoms are generally protected, including in matters of marriage and family law. Authorities enforce laws against rape, domestic abuse, femicide, and sexual abuse of minors, but such violence remains a serious problem, and insufficient public resources are dedicated to supporting and protecting victims. During the 2020–21 judicial year, 34 percent of reported sex crimes were committed against children. Over 900 cases of gender-based violence (GBV) were reported in the first half of 2021. In July, the government established a support fund for GBV survivors. In August, it approved a 2021–23 action plan to address sexual violence against minors. In November, the government reopened facilities in Santiago Norte and Santo Antão to protect at-risk children.

Same-sex marriages are not recognized.

The law prohibits forced labor and other exploitative practices, and the government actively enforces such safeguards in the formal sector. However, a high percent of the Cabo Verdean workforce continues to work informally.

Immigrant workers who lack employment contracts remain vulnerable to abuses, and children are reportedly exposed to sex trafficking and illegal work in agriculture or domestic service. In September 2021, the government issued an antitrafficking procedural handbook.