Digital technology helped spur historic protests for racial justice. But now it is being weaponized to undermine basic rights. 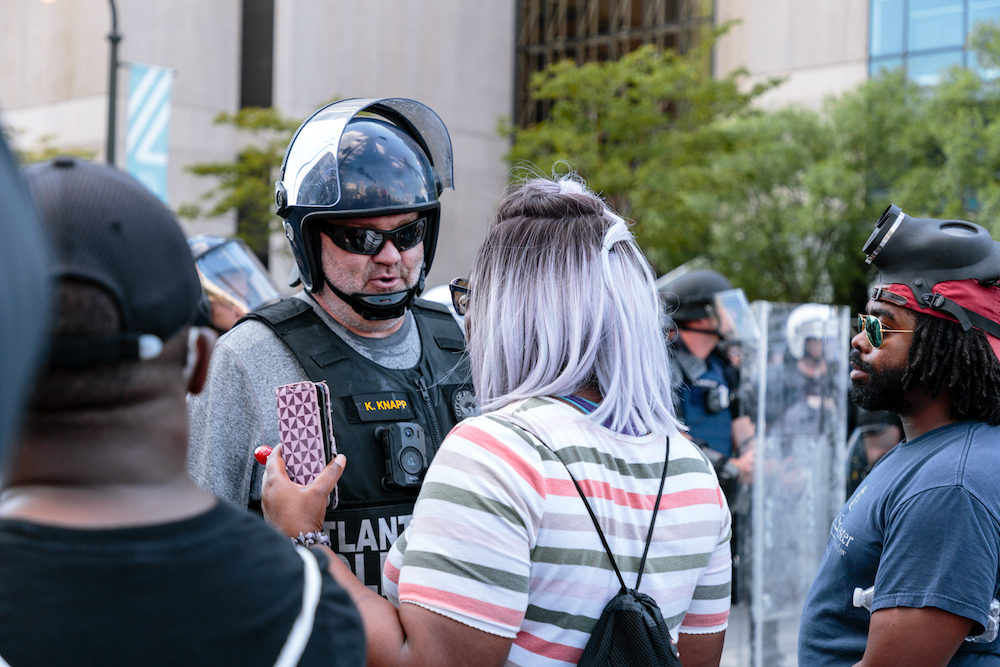 In March 1991, officers of the Los Angeles Police Department brutally beat Rodney King. A nearby resident, awakened by the sound of helicopters and sirens, filmed the incident using a home video camera. He then passed the footage to a local news station, which broadcast it around the country and the world, forcing a reckoning with the realities of racism and police violence in the United States.

The officers’ behavior was not new, but the method of its capture was. Nearly three decades later, protests against police brutality and racism are taking place in cities across the world after a Minneapolis Police Department officer killed George Floyd in an incident captured on cell-phone and surveillance videos, and shared globally on social media platforms. Indeed, the rapid development of digital technology and social media has produced immensely powerful tools for organizing, assembling, and demanding justice. But this same technology, alongside advances in artificial intelligence, has also opened up new possibilities for intrusive government surveillance and other violations of Americans’ basic rights.

As the current protests continue, federal and local authorities are combing through social media platforms and identifying protest organizers and participants. In Cookeville, Tennessee, federal agents showed up at the homes or places of employment of several people who had planned Black Lives Matter rallies on Facebook. One university student was asked about her offer to provide transportation to and from a rally, as well as her private Facebook posts. Agents from the same unit, a Federal Bureau of Investigation (FBI) terrorism task force, also questioned an early coordinator of Cookeville’s protests, even after she quit organizing them upon receiving death threats.

Cookeville is not an isolated incident. Black Lives Matter has been the subject of surveillance for almost as long as the movement has existed. In 2015, the Intercept reported that the Department of Homeland Security had been monitoring BLM activities on social media as protests spread from Ferguson, Missouri, across the country after the police killing of Michael Brown. In 2017, the Guardian revealed that undercover New York Police Department officers infiltrated groups of BLM activists protesting the killing by police of Eric Garner, and accessed organizers’ private group texts.

Authorities have also created fake Facebook accounts to gain access to personal networks of civic activists. In 2016 and 2017, the Memphis Police Department allegedly created at least one fake Facebook profile to “friend” racial justice activists and gather information from their public and private posts. In one instance, police collected information from a nonpublic post recommending a book by the activist and political theorist Saul Alinsky—along with names of 58 individuals who simply “liked” the post. Four journalists were among those swept up in this monitoring.

Tracking of constitutionally protected activity is not limited to racial justice movements. In recent years, Immigration and Customs Enforcement (ICE) has gathered information from Facebook about New York City protests against the Trump administration’s immigration and gun-control policies. Leaked documents revealed that Customs and Border Protection created a list of 59 immigration activists, journalists, lawyers, and Facebook group administrators to be targeted for greater scrutiny at the US–Mexico border.

The dangers of big data surveillance

Social media monitoring is part of the government’s turn toward big data surveillance. Sophisticated technology often used as part of this effort can quickly map people’s personal relationships through link analysis; it can also infer subjects’ past, present, or future locations, and identify and categorize user content based on the use of keywords such as “justiceforgeorge” and “nojusticenopeace.” But this software has serious limitations. Algorithmic tools can further entrench racial discrimination due to reliance on inaccurate or biased data, and natural-language processing has been shown to accurately analyze social media text only 70 to 80 percent of the time. Slang or non-English speech is particularly difficult for many systems used in the United States to interpret, leaving it susceptible to misinterpretation and thereby increasing the likelihood of people being arbitrarily targeted.

Information gathered through big data surveillance can be deposited in massive multiagency databases and combined with public records, secret intelligence materials, and privately assembled datasets. Without a robust federal data privacy law in the United States, there remains little oversight or transparency over who has access to this information, and how it is used.

The US government also has a range of other invasive surveillance tools at its disposal for use during demonstrations. To track people’s movements and identify protesters, authorities can deploy automated license plate readers, drones, and powerful facial-recognition systems such as one developed by Clearview AI. And at least 75 police agencies have Stingray devices, which mimic mobile-network towers and allow police to track cell phones and determine phone numbers of people in an area.

Using these technologies, authorities can interrupt organizing efforts and disrupt peaceful demonstrations before they begin. They can also identify, track, and even arrest protesters after they return home. Despite strong legal protections in the United States for online speech, police have made arrests for posts criticizing public authorities. A New Hampshire resident was charged with criminal defamation in 2018 after writing in a comment on a news website that a local police chief had “covered up for a dirty cop.” In 2017, Rakem Balogun, a Black activist first identified by the FBI after attending a 2015 protest against law enforcement, was arrested in part for Facebook posts criticizing police.

More broadly, increased surveillance can discourage political expression online. Activists, journalists, and ordinary Americans who might otherwise hold government authorities and police officers to account for wrongdoing may be more inclined to self-censor to avoid repercussions.

Digital platforms have forced people to bear witness to racial injustice— a weakness built into the systems and structures of American democracy—yet they have also opened the door to a disturbing techno-dystopian reality. The surveillance technologies being deployed now both reinforce and exacerbate existing racism within policing, as well as in American society more broadly. The robust changes so desperately needed cannot focus only on addressing centuries-old systemic problems with law enforcement, but must also tackle new threats arising in the digital age.

Amid the current demonstrations, protestors can adopt common-sense digital-security precautions, such as using encrypted communication platforms like Signal, opting for passcodes on phones over Face or Touch ID, disabling location services and WiFi, and keeping devices on airplane mode while attending demonstrations. People should also exercise caution when posting documentation of protest activity online, including by blurring faces to ensure individuals cannot be easily identified in pictures and videos. Until both elected officials, and the private sector developing and selling these tools, take comprehensive action to prevent abusive social media surveillance, it falls on ordinary Americans to safeguard some of our most fundamental freedoms.

In His Own Words: How Biden Can Revive Global Democracy

The Attacks on Hong Kong’s Media Just Keep Getting Worse