Prime Minister Viktor Orbán has searched endlessly for new battles to prop up his public support. With the 2018 elections approaching, his latest moves have brought Hungary to a critical juncture. 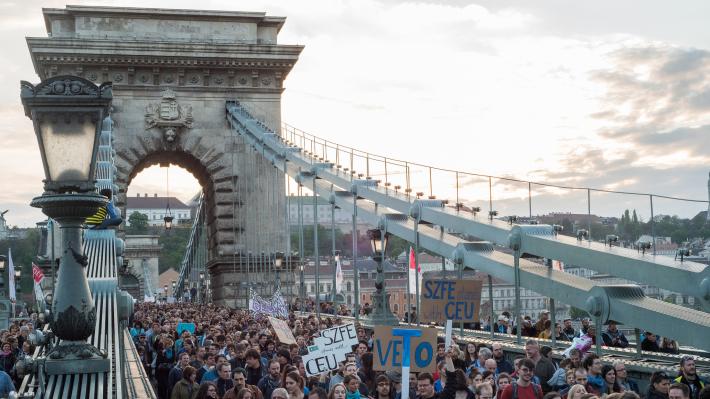 Prime Minister Viktor Orbán has searched endlessly for new battles to prop up his public support. With the 2018 elections approaching, his latest moves have brought Hungary to a critical juncture.

Over the past seven years, the government of Prime Minister Viktor Orbán has succeeded in eradicating institutional checks on its authority, including the judiciary, the electoral framework, and the media. For a country that has been a member of the European Union for more than a decade, such a swift and effective consolidation of power by one party was once unimaginable. Yet the governing majority remains unsatiated and has decided to lash out against its biggest enemy so far.

That enemy is not the Hungarian-born liberal philanthropist George Soros, despite the ruling Fidesz party’s claims. It is the entire segment of the population that dares to disagree with the government and to articulate alternative views. By drafting a Russian-style “foreign agents” bill and adopting legislation this month aimed at closing the well-regarded Central European University (CEU), which Soros founded in 1991, Orbán and his allies have shown that they are ready to reach beyond their direct political opponents and stigmatize anyone in society who thinks differently.

When Fidesz came to power in 2010 with a parliamentary supermajority and began reshaping the country’s institutions to its liking, it wasn’t yet clear whether a fundamental shift away from democracy was afoot. Several of the changes were alarming, such as regulations impinging on media freedoms or arbitrary and repeated changes to the constitution to overcome political or legal obstacles. But because Fidesz had gained overwhelming popular support in the elections and was careful to follow the letter of the legislative process in adopting its “reforms,” the objections from European and international watchdog bodies were anodyne and led to only minor changes to the problematic laws.

Orbán is also a master of his trade. A gifted politician, he has opportunistically used wedge issues to keep Fidesz’s popularity high on the one hand, while methodically rewarding loyalists and enriching the party’s base of donors in the business world on the other. As one of his ideologues noted, “What others call corruption is, in reality, Fidesz’s most important policy.” The prime minister has sought to legitimize the system of handouts to cronies, arguing that the ultimate goal is to create a new middle class. Orbán has also perfected political double-talk, bashing the EU and “Brussels elites” at home, but taking care to maintain good relations with his European counterparts and the conservative party grouping in the European Parliament.

Crucially, though his political opponents often fail to see its importance, Orbán promotes an image of the country that many Hungarians find attractive. After years of technocratic-minded governments that were focused on “catching up” and diligently emulating “Western” standards and institutions, he perceptively detected a lack of emotional identification in politics and appealed directly to voters’ sentiments. In a country burdened by a postcommunist legacy of society-wide disillusionment and cynicism, slogans of past glory and future pride have proved to be powerful.

However successful these more “positive” strategies may be—offering an appealing image to voters and building an economic base of support—they have limits in democratic politics. Voters grow weary of incumbent leaders, and popularity naturally slips from the highs reached in elections. To prevent this progression toward an eventual rotation of power, Orbán and his Fidesz party have whipped up a “negative” form of public support by continually finding new enemies.

Before 2014, these were the Socialist Party and the intellectual successors of the Alliance of Free Democrats, and practically everyone and everything that could be linked with their eight-year period in government prior to Fidesz’s 2010 victory. After it secured reelection in 2014, the party’s attention turned toward external and nonpolitical enemies. In early 2015, Orbán identified the refugee and migrant crisis as a political tool, launching a ferocious anti-immigrant campaign that culminated in hate-drenched propaganda and a largely symbolic referendum in October 2016.

By 2017, after the migration crisis had lost much of its relevance in Hungary, Fidesz knew it needed to find a new enemy to keep its voters engaged in advance of the 2018 elections. The crudeness of the attacks against CEU over the past month, however, has surprised almost everyone. The measures signed into law last week clearly threaten CEU’s future, making its continued operation in Budapest practically impossible. The unabashedly targeted nature of the legislation, backed by government officials’ comments to that effect, as well as the introduction of a “foreign agents” bill in the parliament showcase the regime’s escalating disregard for democracy.

Two developments in 2016 presaged this turn. In February, a dozen private security guards physically obstructed an opposition politician who was attempting to submit documents for a referendum initiative. This was the first time in Hungary’s post-1989 history that physical power was used in a political setting—though the government later condemned the affair, and the National Election Office allowed the politician’s submission to go forward. The government similarly denied any involvement in the October shutdown of the leading opposition daily Népszabadság, attributing it to economic factors. This March, however, the public learned that the paper had been bought by progovernment business magnate Lőrinc Mészáros, quelling any doubts about its ownership.

Today, the government no longer bothers to camouflage its autocratic policies. Orbán announced that 2017 is a year of “rebellion” and will be dedicated to the “marginalization” of Soros and the “globalist-liberal forces” he represents. A government politician ominously forecast that the run-up to the 2018 elections will be the “dirtiest ever” because the opposition will be fighting for its “mere survival.” Since the beginning of mass protests in defense of CEU more than a week ago, progovernment media have claimed that Soros flew in the tens of thousands of demonstrators from abroad; a Fidesz founder threatened them with “persecution.”

The catalyst for this more oppressive tone was the success of right-wing populist forces in Europe and of Donald Trump’s presidential campaign in the United States last year. Orbán openly cheered Trump’s victory, concluding later that it constituted a “permission” for every country to do as it pleases. The Trump administration has yet to outline a clear policy toward Hungary, but the first signs indicate that Orbán might have miscalculated. Recent statements from Brussels also signal an increase in frustration with his double-talk on the EU.

Regardless of the reaction from the United States or EU members, the law targeting CEU and the draft “foreign agents” bill represent a potential tipping point for Hungary. They are the products of a regime that is growing more isolated from the public, and that is willing to anger large segments of society in its constant search for new enemies. After demolishing formal institutional checks and demonizing foreigners, Orbán is now antagonizing ordinary Hungarians who still believe in genuine democracy for their country. If he succeeds in silencing them and remains in the EU, it will prove that he was right—that it is possible to build an “illiberal democracy” inside the union.