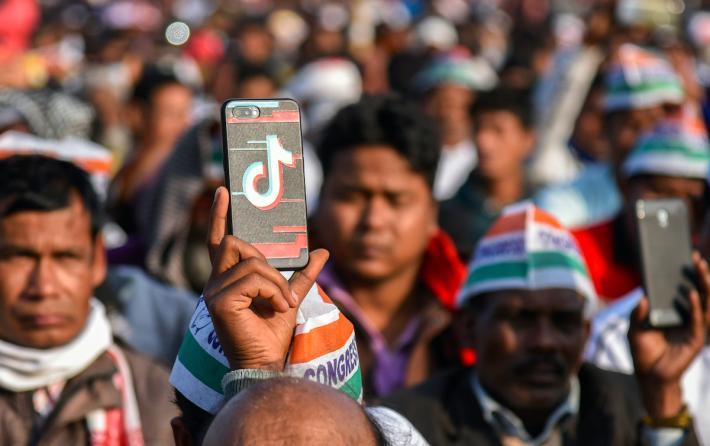 Protestor in Guwahati holds up phone with a TIkTok logo on the case during a rally against India's new citizenship law. Image credit: Talukdar David / Shutterstock.com

Anti-TikTok fervor is sweeping the world. Concerns about the popular Chinese application, best known for cleverly edited videos and dance memes, have been raised from all quarters in the past few weeks, including the technology giant Amazon, the national committees of both major parties in the United States, and Australian politicians. Underlying this recent scrutiny are reports that the Chinese government uses data from Chinese companies — including, potentially, TikTok’s parent company Bytedance — to facilitate its techno-dystopian system of control.

One of the most decisive moves in this backlash came from India: On June 29, the Indian government declared that it would block 59 Chinese apps, including TikTok, citing concerns about national security and data privacy. This week, the government announced it would ban  another 47 apps. This was only the latest sign of a broader crackdown on internet freedom in India, and it represents the wrong approach to protecting the privacy of Indian users.

Indians turned TikTok into one of the most wildly popular apps in the country, with 610 million lifetime downloads as of April. Buoyed by a vibrant population of content creators, India’s TikTok community thrived in the recent months of coronavirus lockdown boredom. TikTok has also served as a powerful political tool. Young people used it to organize and send messages of unity in December of last year, as Indians mobilized across the country to protest a citizenship law that discriminates against Muslims.

Enter the banning order. The government action followed months of rising tensions at a disputed portion of the demarcation line between India and China. A skirmish in mid-June reportedly left 20 Indian soldiers and an unknown number of Chinese soldiers dead. Under pressure to retaliate with sanctions, the Indian government’s response was constrained by the country’s economic dependence on Chinese goods.

Against this backdrop, it seems clear that data security was not the only thing on the government’s mind when it ordered the ban. Facing a limited set of options for sanctions, India’s leaders took aim at China’s digital economy — and at the free internet.

India had the distinction of shutting down the internet more often than any other country in 2019, with blocks implemented at least 121 times. Many shutdowns were imposed in moments of political unrest. For instance, the government repeatedly shut down the internet in cities where Indians protested against the discriminatory citizenship law.

Much of the Indian government’s censorship focuses on Jammu and Kashmir, a contested Muslim-majority region where residents have experienced decades of human rights abuses. India placed Jammu and Kashmir under direct federal control last year, upending the area’s special autonomous status. Following this change, the government imposed a months-long internet shutdown in the region and removed online content relating to Kashmiri journalism.

All told, India blocks access to thousands of websites. Under Section 69A of the Information Technology Act, the government can block public access to online information to safeguard a number of broadly worded interests, such as public order or the “interest of sovereignty and integrity of India.” The government cited Section 69A as the authority under which it banned the 59 Chinese apps in June.

As with internet shutdowns and website blocks, a ban on a social media platform is a human rights issue. The restriction limits the ability of Indians to express themselves online — TikTok dances, no matter how silly, and protest-related videos are both forms of free expression, protected under international treaties to which India is a party.

The decision puts the country in unusual company globally. In Freedom House’s 2019 “Freedom on the Net” report, which tracks internet freedom around the world, 20 of the 65 countries we cover blocked access to one or more social media platforms. Of these, only one other country did so in a context similar to India’s app blocking: Ukraine’s government blocked two Russian-owned social media websites, citing national security and cybersecurity concerns, alongside a host of sanctions aimed at Russian companies. A handful of other governments in countries assessed by the report — China, Iran, and Russia — have justified social media blocks in the past by citing the need to limit influence from foreign companies.

TikTok’s data practices certainly warrant scrutiny. The app collects a good deal of personal information, including geolocation data, browsing histories, and behavioral records on how users engage with content. This level of data collection is the norm for social media companies, as  a cursory look through the privacy policies of the apps on your own phone will confirm.

As a Chinese company, ByteDance must comply with requests from the Chinese government for user data, meaning TikTok carries added risks in terms of the ultimate destination of the information it collects. Equally concerning are reports that the company instructs moderators to censor political speech, including videos that share information about China’s human rights abuses.

Governments should certainly seek to protect user data from misuse by foreign state actors. But the Indian government’s ban hurts the millions of Indians who flocked to TikTok to express themselves. Moreover, Indians are still exposed to equivalent risks for other apps made by Chinese companies, barring further and more drastic bans by the Indian government.

To address its concerns about TikTok while respecting the rights of Indians, the government should enhance privacy protections rather than restrict access to online content. Privacy is at the forefront of India’s internet freedom debates, with a landmark Supreme Court ruling in 2017 declaring privacy a constitutionally protected right. In this context, a draft data protection bill was introduced in the Lok Sabha, the lower house of India’s Parliament. Despite welcome provisions such as special safeguards for the data of children, who form a significant part of TikTok’s user base, the draft bill falls short. For example, it grants the government broad latitude to exempt itself from data protection requirements, opening the door to rights-abusing surveillance, and includes vague localization requirements for certain categories of data.

As scrutiny of TikTok gains momentum, India offers a case study on how and how not to respond. Simply restricting access to the app results in a restriction of freedom. The right way to protect the interests of internet users is to safeguard both their privacy and their freedom of expression.

This piece was originally published by the Diplomat on July 30, 2020.