The year 2019 was the worst for internet freedom in Asia in nearly a decade, and a worrisome omen for 2020. 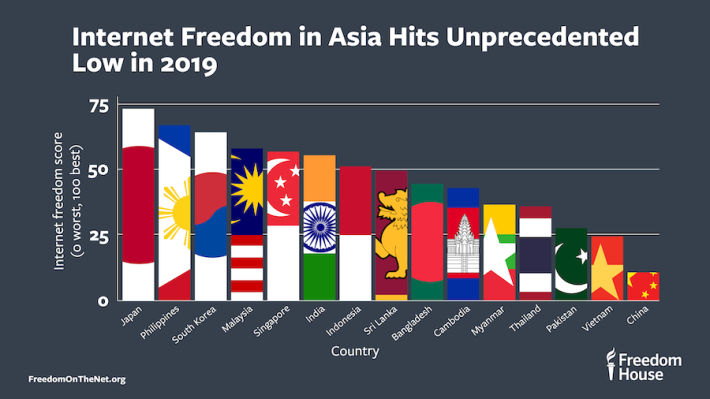 Freedom on the Net 2019 finds dwindling internet freedom in many Asian countries.

A daunting variety of governments across Asia are seizing control of the internet. Employing a growing range of tactics, administrations in democracies and non-democracies alike are working to diminish online space for expression, civic activism, and secure communication. Over the past year, the internet became less free in 10 countries in the region, contributing to a global decline in internet freedom that affected 33 of the 65 countries assessed by Freedom on the Net 2019: The Crisis of Social Media.

Unsurprisingly, China secured the title of the world’s worst abuser of internet freedom for the fourth consecutive year. Constraints in the country went from bad to worse: 2019 saw the most restrictive environment since Freedom on the Net began assessing it a decade ago. Bangladesh suffered the region’s biggest decline, losing four points on a 100-point scale as citizens organized mass protests and voted in an election marred by violence. To maintain control over the population, authorities resorted to blocking independent news websites, restricting mobile networks, and arresting both journalists and ordinary users.

The only country in the region recording an improvement was Malaysia, where a new coalition government made good on some of its democratic promises after winning May 2018 elections, and ending the six-decade reign of the incumbent coalition. Among countries assessed in the region, only Japan, which boasts high rates of internet penetration yet struggles to protect privacy rights, hosts a free and open internet.

Weaponizing the Law to Suppress Dissent

In 2019, 14 out of 15 countries assessed in Asia arrested or imprisoned people for their nonviolent expression online — the highest number ever recorded by Freedom on the Net. Only users in Japan were spared from such punishment.

In one of the most egregious cases, authorities in Vietnam sentenced human rights defender and environmentalist Le Dinh Luong to 20 years in prison after a one-day trial, in part over his Facebook posts criticizing the government. In Pakistan, two men were sentenced to death for blasphemy upon being found guilty of sharing “disrespectful material” about the Prophet Muhammad on their websites, although appeals of their convictions are ongoing. Even in places where long prison sentences over online content are rare, such as India and Sri Lanka, the increasing risk of arrest incentivizes users to remain silent — leaving a climate of fear that reduces the diversity of opinions and discourages robust debate online.

When authorities were unable to silence critical voices using existing laws, they simply passed new ones — usually with broad wording that grants those in power the ability to censor or launch prosecutions over anything deemed objectionable. Singapore’s Protection from Online Falsehoods and Manipulation Act provides an alarming amount of power to any government minister to remove or restrict access to content they deem false or misleading, with limited oversight and transparency. Those in violation of the law face harsh criminal penalties. Similarly, both Thailand and Vietnam — countries long ranked Not Free by Freedom on the Net — enacted draconian cybersecurity laws that enhanced authorities’ ability to access citizens’ personal information with limited oversight. Vietnam’s law, for example, imposes strict data retention and localization requirements, which could allow authorities to more easily access the intimate data of government critics at their will.

In another record high for the region, governments in nine countries enlisted bots and fake accounts to surreptitiously spread political propaganda, shape online opinions, and harass opponents. Nearly 700 military officials in Myanmar, for example, were reported to have conducted a systematic disinformation campaign on Facebook lasting five years, with assistance from organized troll accounts that helped to further the content’s reach to local residents.

Politicians in the Philippines, who pioneered content manipulation in 2016 to in efforts to assure Rodrigo Duterte’s ascendance to the presidency, refined their tactics in the 2019 midterm elections in order to skirt electoral regulations and bypass tech companies’ efforts to limit disinformation. In a relatively new strategy, manipulated content was spread through private social media groups with less content moderation. Politicians further worked with ostensibly apolitical accounts with small- to medium-sized followings, such as “Thirsttrap Instagrammers,” to make politicized content seem more like genuine support to ordinary users scrolling through their social media feeds.

In India, the ruling Hindu nationalist Bharatiya Janata Party (BJP) and its leader, Prime Minister Narendra Modi, have marketed the Narendra Modi “NaMo” app as a way for Indians to keep up with official government news. In practice, the platform serves as an echo chamber in which the BJP has spread disinformation that benefits the party among millions of people. And instead of carrying out the work themselves, the BJP has crowdsourced ordinary users to become “top volunteers” on the platform. To gain points and be featured on the app’s “leaderboard,” users simply need to invite others to join the platform and to share its content, which is often hyperpartisan and misleading.

Protecting Internet Freedom in 2020 and Beyond

The challenge of reversing the precipitous decline of internet freedom in Asia is formidable, especially as new, transnational threats further undermine human rights online. Evidence has emerged, for example, that authoritarian governments like those in Thailand, Vietnam, and Cambodia may be increasingly cooperating in a regional crackdown on their critics, who have been targeted in disturbing instances of cross-border violence and enforced disappearances.

The time to act is now. Robust collaboration among civil society, tech companies, and democratic governments in the region is needed to protect fundamental freedoms. Internet-related laws should abide by international human rights standards, so that users are granted control over their data and that any remedies to genuine issues like disinformation do not unduly restrict free expression. Tech companies working in the region should resist government demands for data, and carefully assess requests for content removal to ensure that they do not lead to further abuses or violate democratic principles. Civil society should continue raising awareness and conducting early-warning analysis about government censorship and surveillance efforts. Without such decisive action, 2020 could see yet another record low for internet freedom.

This article was first published by The Diplomat on November 26, 2019.

Taking No Chances, Thailand's Junta Locks Down the Internet ahead of Elections