Our heritage includes both great wrongs and the means to set them right. 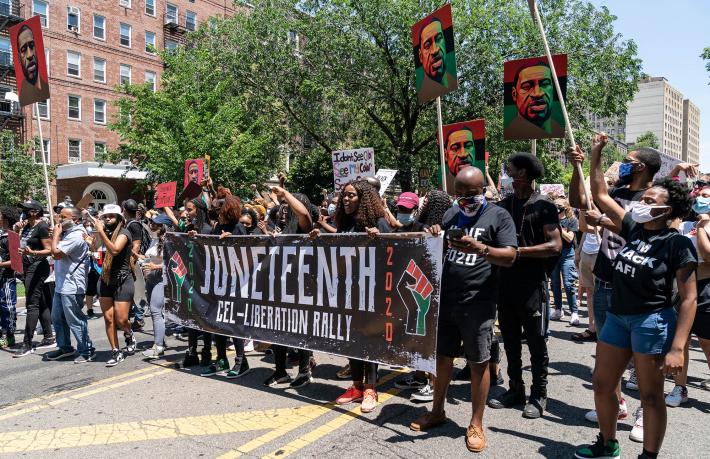 For some, Juneteenth is a reminder of the past.

But for all of us, it must also be a call to action for the present and future.

Juneteenth—also known as Freedom Day—marks the anniversary of June 19, 1865, when Union soldiers arrived in Galveston, Texas, and announced that slavery there had been abolished. The news was met with joyful celebration and prayer by African Americans who had been enslaved.

It is remarkable and heartbreaking that their freedom came so late, more than two years after President Lincoln’s Emancipation Proclamation took effect in January 1863. But the abolition of slavery in the United States was unquestionably well worth the tremendous struggle it entailed, and it was undeniably a major victory for justice and American democracy.

Now, 156 years later, we are still wrestling with questions of justice and democracy. The United States faces critical problems including police violence, inequality before the law, and increasingly, very real restrictions on voting rights—the lifeblood of any democratic society. While these problems are felt disproportionately by people of color, they affect our system of government and our country as a whole. These issues have naturally stirred tremendous debate, and even caused some to question the value and efficacy of democracy itself.

Today’s questions about democracy arise directly from the paradox of America’s complicated past. Our history is characterized simultaneously by lofty democratic principles and blatant injustice, both of which are intertwined in our founding documents, our centuries of law and jurisprudence, and political movements that together determined the course of our society.

So what do we make of this undeniable paradox, in which liberty and injustice have existed side by side? Some would dismiss or denounce the monumental foundations of our nation because of the historical injustices they encompass. Others would erase or downplay the shameful parts of our history because they threaten to overshadow pride in our genuine accomplishments. Neither impulse is warranted, and neither is the lesson to be taken from Juneteenth.

Instead, Juneteenth and American history in general illustrate the essence and necessity of democracy. They show that we must recognize the profound and timeless importance of democratic principles, the reality that people often fail to live up to these principles, and the opportunities for self-correction and renewal that democratic systems provide.

Only in a democracy can those most affected by institutional failures use the existing system of government to improve both their own condition and the system itself. Frederick Douglass, the brilliant orator and activist who began his life in slavery, captured this unique quality in an 1852 speech, in which he speaks about the brutality of slavery, defends the constitution as a “glorious liberty document” and argues that it contains “principles and purposes, entirely hostile to the existence of slavery.” It is jarring to remember that slavery was quite legal when he made these remarks.

Douglass was hardly the only one to use our founding documents and institutions as tools for the expansion of democratic freedoms that were too often denied. Notable figures including Martin Luther King Jr., Thurgood Marshall, and John Lewis—and the millions of citizens who participated in the movements they led—would continue to invoke the principles of liberty, equality, and government of, by, and for the people to challenge our country to live up to its core ideals. Moreover they employed all of the instruments that democracy offered them to advance their goals, including freedom of assembly, freedom of association, a free press, and the rule of law as administered by independent courts.

In his 1967 speech at the Hungry Club in Atlanta, Dr. King commended the courageous democracy activists of the early 1960s who took part in sit-ins, the Freedom Rides, and the boycotts and civil disobedience of the Birmingham Movement. He noted that “when they decided to sit down at those counters, they were in reality standing up for the best in the American dream and carrying the whole nation back to those great wells of democracy which were dug deep by the founding fathers in the formulation of the Constitution and the Declaration of Independence.”

As we reflect on Juneteenth in a country that continues to confront the challenges of racial injustice, inequality of opportunity, and political violence, we must follow the examples of past leaders in the struggle for freedom by extolling the importance of democratic principles, honestly identifying the areas in which we have strayed from those principles, and joining the effort to correct and improve our institutions and society. We remember the liberation of enslaved Americans with celebration and prayer, recalling the joy felt on that day in 1865. But we should also honor this day by redoubling our commitment to democratic values like ensuring full access to the right to vote and working to ensure that all people—in the United States and around the world—can enjoy the freedoms to which they are entitled as human beings.

When anyone has been denied freedom and justice, their liberation always seems late in coming. But that is all the more reason to rededicate ourselves to this urgent endeavor.

Nicole Bibbins Sedaca is the executive vice president of Freedom House. Prior to joining Freedom House, Bibbins Sedaca served as the Deputy Director of Georgetown University’s Master of Science in Foreign Service (MSFS) program, the Co-Chair for the Global Politics and Security Concentration, and a Professor in the Practice of International Affairs in MSFS. She is also the Kelly and David Pfeil Fellow at the George W. Bush Institute.