The current selection process will determine the strength and independence of the judiciary as the country prepares for highly contested elections in 2017. 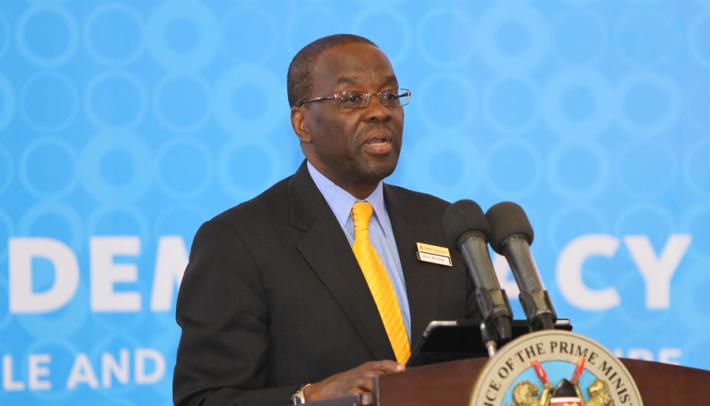 The current selection process will determine the strength and independence of the judiciary as the country prepares for highly contested elections in 2017.

Chief Justice Willy Mutunga’s retirement from the Supreme Court in June has brought Kenya’s judiciary to a critical juncture. In his five-year tenure, Mutunga helped restore citizens’ trust in the judiciary, ensuring that it defended against efforts by the executive branch to restrict basic rights. His seat is now open, and the Judicial Service Commission (JSC) is in the process of selecting a replacement.

The strength or weakness of Mutunga’s successor may determine whether the judiciary retains its current reputation for independence, and whether the Supreme Court in particular can serve as a credible arbiter of potential electoral disputes that may come before it in 2017.

A defender of fundamental rights

Building on the adoption of Kenya’s progressive 2010 constitution, Mutunga instituted a range of reforms that helped clear case backlogs, reduce corruption in the courts, and restore the public’s confidence in the judicial branch. According to an August 2015 survey by Freedom House, Kenyans see the judiciary as the third most trusted institution to stand up for them and defend their rights—behind only the media and civil society. A survey by Ipsos Synovate from December 2014 found that twice as many Kenyans have “a lot” of confidence in the Supreme Court as have no confidence in it.

Since 2010, the judiciary has made a series of rulings that upheld the constitutional rights and freedoms of Kenyan citizens. For example, the High Court in February 2015 struck down eight provisions of the Security Laws (Amendment) Act 2014 that would have criminalized publishing or broadcasting images of terrorist attacks and permitted 90-day detentions without charge, among other restrictions.

In April 2016, the High Court also declared unconstitutional a section of the Kenya Information and Communication Act (KICA) that penalized “misuse of licensed telecommunications equipment” for disseminating “offensive” or “annoying” messages, and had been used to arrest bloggers and social media users. Most recently, the High Court ruled that amendments to the Judicial Service Act were unconstitutional, blocking the executive’s efforts to assert control over the judicial appointment process and the judiciary’s composition.

Efforts by the executive to restrict the rights of Kenyans and infringe on the judiciary’s independence will continue to build as the country approaches general elections in August 2017 and the perceived threat to the ruling party’s power grows.

The need for an impartial political referee

During this election cycle, the Supreme Court will likely rule on whether the constitution allows for Parliament to delay the elections and thus extend President Uhuru Kenyatta’s term past August 2017. As the body with exclusive jurisdiction over presidential election petitions, the Supreme Court may also decide the outcome of the 2017 presidential contest.

Even if the Supreme Court is not asked to rule on a presidential election dispute, the judiciary will hear myriad election petitions at every level that will determine the balance of political power in Kenya for the next five years.

Moreover, the role of the judiciary will not end once the elections are settled. Should Kenya’s ruling party take a cue from its East African neighbors Rwanda, Uganda, and Burundi, the Supreme Court may need to step in to block unconstitutional attempts to lift presidential term limits. The court could also be asked to rule on legislation that regulates the work of nongovernmental organizations, censors the media, or curtails online freedoms, and to adjudicate cases of alleged police brutality or extrajudicial killings by defense forces.

How to choose a strong judicial leader

To get this crucial appointment right, the JSC must first be open and transparent in its selection process. The 11-member JSC is composed mostly of judges and attorneys chosen by their peers, as well as the attorney general, a representative appointed by the Public Service Commission, and two presidential appointees meant to represent the public. Since the majority of the JSC’s members are officers of the court rather than representatives of the government, the body should be able to select a candidate who is free from executive influence.

Since Mutunga’s retirement, however, the JSC has received 14 applications for the chief justice position and shortlisted six for interviews. This represents a departure from the 2011 appointment process, in which all applicants were interviewed, and the JSC has not published its criteria for shortlisting candidates. The legal think tank Katiba Institute has consequently filed a constitutional petition to compel the JSC to publish its criteria, citing provisions on access to information. Regardless of whether the JSC is constitutionally obligated to provide these criteria, it should adhere to the principle of transparency so that Kenyans can assess their government’s commitment to a strong, independent judiciary at this critical time.

Beyond procedural issues, the ultimate outcome must be a new chief justice who will carry on Mutunga’s legacy of reform and defend Kenya’s democracy against attempted encroachments. The current shortlist includes a mix of ruling elites, moderate legal scholars, and progressive judges. The ideal candidate would be one who, regardless of his or her ideological leanings, has demonstrated an independence from executive influence, an unflinching devotion to upholding fundamental human rights, and an indisputable eligibility under the leadership and integrity provisions in Chapter Six of Kenya’s constitution.

The executive will undoubtedly push for a candidate who will rule in its favor, just as nearly every executive around the world tends to do. But in selecting Mutunga’s replacement, the JSC should take the long view. A candidate with a track record of interpreting the law based on the constitution rather than the whim of the executive—and who is ready and willing to advance judicial reforms by improving public engagement, changing the culture of corruption, and pushing for improved delivery of services—would ensure that the credibility of the judiciary continues to grow, and that the rights of Kenyans are protected before, during, and well after the 2017 elections.