COVID-19 may be accelerating a multiyear decline in both press freedom and democracy. 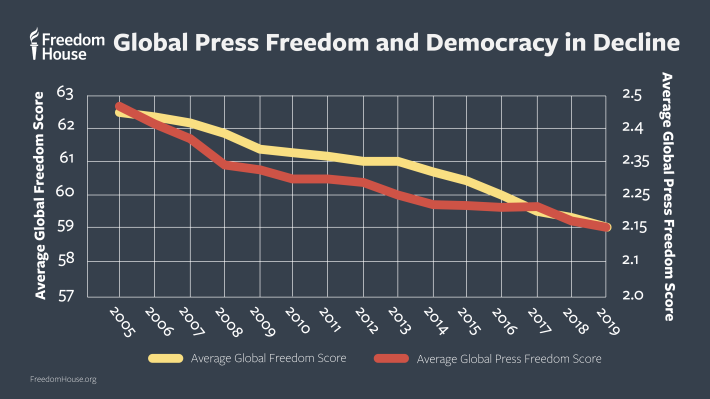 The United Nations established May 3 as World Press Freedom Day in 1993 to celebrate the fundamental principles of press freedom and remind governments of their obligation to protect them. Yet with each passing year, governments around the world have been failing in their commitments. Global press freedom fell to its lowest point in at least a decade in 2019, according to Freedom House’s Freedom in the World report.

This decline has occurred in tandem with the broader deterioration in political rights and civil liberties around the world, underscoring the fact that the ability of journalists to report freely on matters of public interest is a crucial indicator of freedom and democracy overall.

This year, the need to defend press freedom takes on greater urgency amid the COVID-19 crisis as journalists around the world work to deliver factual information about the frontlines of the pandemic and hold public officials accountable, often at considerable risk to their own health.

Unfortunately, many governments have responded to this scrutiny with new restrictions, using the health crisis as pretext to attack the press and limit its activities. Media freedom organizations such as Reporters Without Borders, the Committee to Protect Journalists, the International Press Institute, and IFEX have documented numerous cases around the world in which journalists have been harassed, detained, fined, and imprisoned for their reporting. Only four months into 2020, it appears that the decline in global press freedom is continuing and possibly even accelerating.

From bad to worse in faltering democracies

Some of the most disturbing attacks on the press have emerged in countries where democratic institutions were already under pressure before the pandemic struck. They include the world’s two largest democracies, India and the United States.

In India, the ruling Bharatiya Janata Party (BJP) under Prime Minister Narendra Modi took a series of discriminatory actions against the Muslim minority over the past year, threatening the country’s traditional democratic norms. Conditions have grown worse during the COVID-19 outbreak, not only because Muslims have been scapegoated as carriers of the virus, but also because the authorities have used aggressive means to control the media narrative surrounding their response. Numerous journalists have been threatened and attacked by police for reporting during the lockdown; others have been arrested for spreading “fake news” about the government’s performance. The government has also toyed with censorship, persuading the Supreme Court to issue an order requiring all media to “publish the official version” of COVID-19 developments.

In the United States, President Donald Trump has ramped up his rhetorical attacks on the media as the virus has spread, attempting to deflect criticism of his mismanagement of the crisis and advance his long-running campaign to sow distrust in mainstream news outlets. While the press corps has largely proven resilient in the face of sustained political pressure, the economic fallout from COVID-19 has dramatically intensified existing threats to the news industry’s business model, resulting in layoffs and closures around the country at a time when local communities urgently need fact-based journalism about the issues close to home. As a recent PEN America study of the local media landscape stated, “the local news ecosystem is … foundational to American democracy.” Its decimation by a virus-related collapse in advertising revenue will have consequences for civic engagement and democratic governance long after the pandemic and the current administration in Washington have passed.

These press freedom trends do not bode well for global democracy. The latest attacks on journalists are chipping away at one of the fundamental institutions of an open society and undermining the public’s ability to assess government actions that may harm human rights in the name of public health. Without free and independent media serving as watchdogs, citizens in some countries will be left with diminished freedoms when the COVID-19 crisis ends, damaging democracy in ways that will be difficult to undo.

Governments must live up to their obligation to protect freedom of the press, even and especially during an emergency. There should be no state censorship or other undue restrictions on the free flow of information. All efforts must be made to provide and maintain access to the internet and other communication platforms. While the spread of disinformation must be countered, criminal penalties for distributing false information are disproportionate and prone to arbitrary application and abuse. Instead, governments should focus on combating falsehoods by delivering clear, accurate, and up-to-date information.

Fortunately, press freedom is resilient. While democratic institutions like independent courts, safeguards against corruption, and a robust multiparty political system are exceedingly difficult to establish and to repair when damaged, press freedom can flourish even on what seems like infertile ground, recovering quickly from periods of repression. To reverse the decline in global press freedom, the people and governments of the world must act now to roll back threats to independent media. The future of democracy depends on it.