Rulers in Moscow, Cairo, and Baku are eager to show their strength, but afraid to put it to a real test. 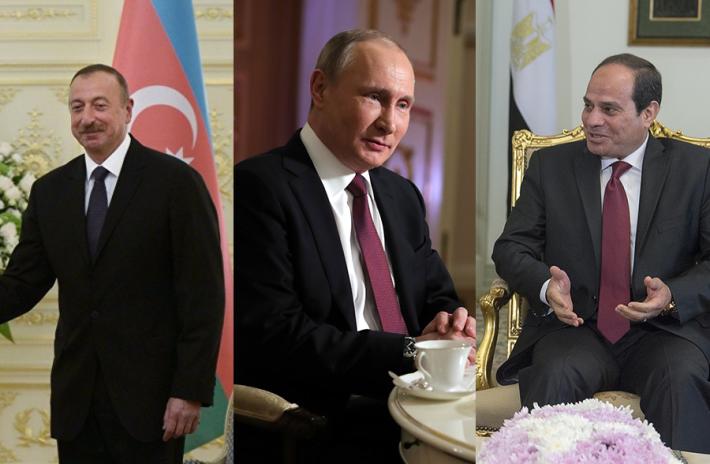 Rulers in Moscow, Cairo, and Baku are eager to show their strength, but afraid to put it to a real test.

On March 18, Russians will go to the polls to elect a president. Egyptians will do the same beginning eight days later, as will citizens of Azerbaijan on April 11.

Superficially, the Russian election will resemble balloting in normal democratic societies. There are multiple candidates—eight in all, including the incumbent, Vladimir Putin. Each candidate has been given an allotment of free broadcast time. With the exception of Putin, the candidates have participated in televised debates. There are public service ads that remind Russians to vote as a matter of civic responsibility. We are told that steps have been taken to ensure an honest tabulation and to prevent ballot stuffing. Every box has been checked: Russia’s elections will be orderly and civilized, without the chaos that marks voting in America.

Except that when Russians go to the polls, they will be participating in a choreographed, Potemkin performance, a fraud years in the making. The elections in Egypt and Azerbaijan will similarly be exercises in make-believe.

In Egypt, President Abdel Fattah al-Sisi locked down the outcome months in advance by preventing other candidates from running—especially those, like himself, with military backgrounds. The only nominal challenger left in the race is a Sisi supporter. In Azerbaijan, President Ilham Aliyev is sure to win a fourth term, as key opposition figures have been harassed, jailed, or forced into exile by his security forces, and an opposition coalition announced a boycott after Aliyev abruptly moved the election forward from October to April. The president has also engineered the extension of his terms from five to seven years, removed a minimum age provision (clearing the way for his 19-year-old son to succeed him at some point), and appointed his wife as vice president. In 2013, Aliyev won reelection with nearly 85 percent of the vote; he may do even better this time around.

Things were not always this way. Russia, Egypt, and Azerbaijan—all firmly in the camp of dictatorships these days—once held elections that were, if not free and fair, then at least considerably more competitive than is the case in 2018. Even under Hosni Mubarak, some of Egypt’s elections were more interesting than the upcoming exercise, with the regime using voting results to gauge the public mood.

Such tightly controlled votes raise the question of why authoritarians rig the system to ensure not just victory, but overwhelming victory—with vote totals of more than 80 or 90 percent in some cases. Aren’t Putin and Sisi sufficiently popular to win on their own merits?

In fact, elections can be unpredictable affairs. Overly confident rulers have often been surprised by voters who opt for democracy rather than authoritarian continuity. Thus the jarring losses for Pinochet in Chile and the ruling communist party in Poland during the 1980s. Today’s authoritarians are well versed in the history of open elections in such settings, and are determined to avoid a similar fate. Even victory at 60 percent can provoke questions about the strongman’s staying power, encouraging rivals from his own camp to mount a challenge.

In mapping plans for the upcoming election in Russia, Putin’s agents have demonstrated breathtaking attention to almost every detail. Nominal opposition candidates were hand-picked to give the race a veneer of competitiveness. Their principal qualification is a lack of popular support. The one potential candidate with a broad personal following and an unapologetic anti-Putin message, Aleksey Navalny, was prevented from running through bogus criminal charges, harassment, and physical attacks. Indeed, the regime’s ability to keep Navalny sidelined without killing or imprisoning him is a tribute to its expertise in modern methods of repression.

The authorized challengers’ free broadcast time is irrelevant, as the media have for years showcased Putin as the bare-chested leader who made Russia great again by, among other things, invading smaller, vulnerable neighbors. To prevent complications, Kremlin operatives have reportedly instructed the media to broadcast only good news until election day. Thus incidents like a student’s axe attack on younger children went unreported on television, which instead focused on the weather, folk festivals, and foreign disasters.

In terms of vote monitoring, experts from credible international organizations will be offset by “zombie” monitors from Eurasian dictatorships and Kremlin-friendly European parties, diluting any reports of irregularities.

The government’s campaign to encourage voter participation stems less from a commitment to civic virtue than from its apprehension that a low turnout will embarrass Putin. State employees have been instructed to turn out on election day. And just to reassure Russians that the government hasn’t succumbed to “European” values, a disgracefully homophobic get-out-the-vote video depicts a man who disdained voting as a waste of time waking up to a new universe where he finds himself in bed with a gay man.

An obvious question is why authoritarians bother with sham elections at all. The answer, in part, is that these events are useful demonstrations of political mastery. Putin’s poll victories enable him to reject comparisons with Leonid Brezhnev and other doddering Soviet-era leaders. But the fake exercises also remind us that elections are still the only universally recognized source of legitimacy for a modern ruler. There is truth in the adage that while most dictators pretend to be democrats, no democrat pretends to be a dictator.