One Year after the Coup Attempt, Turkey Is More Fragile than Ever

Erdoğan’s relentless drive for power has worsened fissures in society, the military, and the ruling party itself. 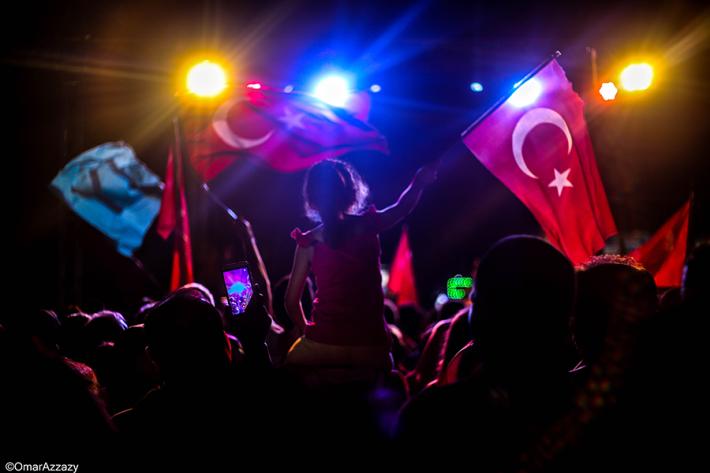 Erdoğan’s relentless drive for power has worsened fissures in society, the military, and the ruling party itself.

This Saturday, Turkey will mark one year since the shocking coup attempt that left 265 people dead and more than 2,000 injured. The story President Recep Tayyip Erdoğan and his government want to tell this week is about Turkey’s unity. For good reason, they stress the heroism of thousands of civilians who went into the streets to confront armed soldiers and tanks, of police officers who fought back with small arms against helicopter gunships.

But there is no unity. There is not even clarity about what happened on July 15, 2016. The government has said from day one that it knows exactly who carried out the coup, pinning it exclusively on what officials call the “parallel structure” of the religious movement led by Fethullah Gülen. (In one prosecutor’s version, this structure worked in collaboration with then U.S. attorney Preet Bharara, U.S. senator Chuck Schumer, and the CIA.)

But if the government has detailed evidence proving that the diffuse Gülen movement, with which it was closely allied until 2013, was involved as a whole instead of in part, they have not made it public. There has been no effort at a public inquiry aside from a comically incomplete parliamentary hearing and selective leaks to media. The government’s fundamental position—that a coup attempt without any apparent political or media strategy, which failed to gain any political or popular support from the moment it started, was actually a vast plot by hundreds of thousands, possibly millions of Turkish civilians to overthrow the government—is absurd on its face.

Tellingly, the best collection of evidence of the Gülen movement’s role is a Medium post by two progovernment journalists. But even their effort fails to establish a clear hierarchy or leadership for the coup attempt, or to address critical questions, like why the powerful intelligence agency (MİT) did not notify the president of the attempt for hours after it learned of it, why a significant number of secularist officers participated, and who the plotters expected to act as the political pillar of the junta. These are largely the same questions that observers had in July and August 2016. We may not learn the truth for years or even decades.

Instead, from the first days, the response to the coup attempt transformed into a purge targeting all manner of dissent and disagreement, including from those with not even a nominal connection to the Gülen movement. The numbers are shocking: 50,546 people in jail, 103,824 dismissed from public service and 33,843 suspended, 166 journalists in custody, hundreds of lawyers arrested, more than $10 billion worth of private companies seized, 150 media outlets and over 1,000 nongovernmental organizations and foundations closed by decree.

The coleaders of the second-largest opposition party in the parliament are in prison with 9 other lawmakers and 85 city mayors from their party; one member of parliament from the largest opposition party was arrested a month ago. New arrests are still coming. Last week 10 human rights defenders, including the director of Amnesty International’s Turkey branch, were arrested at a training event in Istanbul. On July 10, arrest warrants were issued for 72 more academics, among them several from the country’s most elite university.

When the proclaimed national unity fails, the government enforces it. In April, despite its vast advantage in media, money, and resources over the crippled opposition, the government seemed to be falling short of the majority it needed to pass a constitutional referendum that would strengthen Erdoğan’s powers. Late on the very day of voting, it changed the rules for counting ballots, allowing unknown numbers of otherwise invalid votes to be accepted. The proposed amendments barely squeaked over the threshold.

After the opposition mounted a huge rally last weekend to protest arbitrary arrests and imprisonment, the government is using this week to show that it can muster even larger numbers.

Divisions in the military and ruling party

But the government’s ever more insistent demonstrations of dominance cannot paper over the fragility of Erdoğan’s position. This week the government rolled out posters to commemorate the events of July 15 that showed civilians humiliating soldiers (and bizarrely repurposed a famous photograph of an American soldier from 1991). The depiction of the soldiers provoked angry condemnations from a public that still admires the military, including from nationalist figures who are influential in the security establishment and have been backing Erdoğan during the purge, underscoring his continued vulnerability regarding the armed forces (TSK).

With much of the TSK and the intelligence agency MİT still under suspicion, Erdoğan is expanding informal paramilitary groups, while the mass purge of officers has opened up opportunities for other ideological factions to advance within the TSK. New “parallel structures” could well develop in the vacuum. Adding to the strain, Turkey has plunged further into the war in Syria since the coup attempt, occupying more territory in the north of that country in order to prevent the consolidation of a Kurdish statelet along its borders and forcing the military into the unfamiliar role of an occupying army administering Syrian cities.

Even the ruling party, the AKP, is riven by fierce internal conflicts. It feels like ancient history now, but just two months before the coup attempt, in May 2016, President Erdoğan had deposed his own handpicked prime minister, Ahmet Davutoğlu. Anonymous accusations circulated online that the former foreign minister had been undermining the president’s agenda. Pundits and intellectuals associated with Davutoğlu within the AKP—themselves already demonstrably pro-Erdoğan as survivors of several rounds of previous purges—came under scrutiny.

Since the coup attempt, these intraparty attacks have resurfaced in new forms. An atmosphere of fear pervades the AKP. It is no longer enough to support the president: The loyalists must prove their loyalty at every step. Although the government is supposedly pursuing anyone connected with Fethullah Gülen, this week Gülen and his spokesman stated what has long been considered obvious, that he has had considerable personal contacts with senior members of the AKP, including Davutoğlu and former president Abdullah Gül, and mentioned Erdoğan’s son-in-law and current energy minister Berat Albayrak as well. Gül has denied the claims.

A nation of one

The story of Turkey, based in historical experience but also recreated consciously by the republic through decades of indoctrination, is of a country that survived vicious attempts by external powers, in collaboration with internal traitors, to divide it. In the years before the coup attempt but even more so since that night, Erdoğan has cast himself as synonymous with Turkey, a victim of the conspiracies of the great powers and their accomplices within society, and he has equated his survival in power with the survival of the state.

He is now turning that symbolic union between his person and the state into reality, by warping state institutions to fit his needs and subordinating the other branches of government to the presidency. But the more he succeeds in his goal, the more Erdoğan creates a Turkey that cannot survive him. Whatever comes next, and whenever it comes, the damage will take decades to repair.