It is a mistake to view their drift from democracy through a partisan lens. 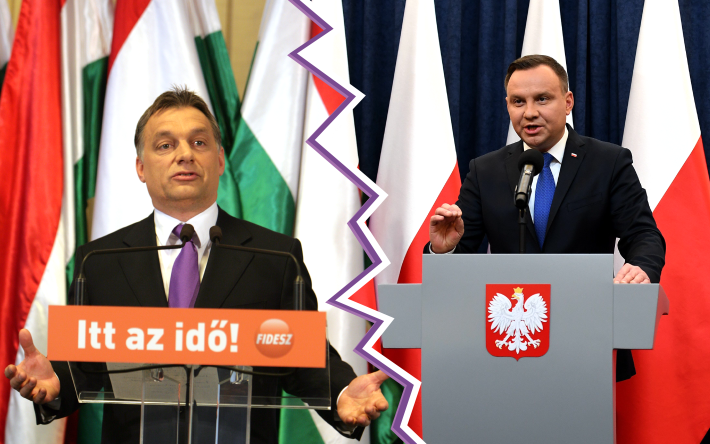 The coronavirus has revived attention and debate on the steady erosion of democratic practice in Hungary and Poland, where strongman leaders have tried to use the pandemic to strengthen their grip on power.

In Poland, the ruling Law and Justice (PiS) party has been pushing to hold a presidential election as soon as possible—improvising dubious legal maneuvers and running roughshod over logistical and safety concerns—in order to secure a new term for the incumbent. Worse, Hungary’s ruling Fidesz party has passed an emergency law that hands Prime Minister Viktor Orbán the authority to rule by decree indefinitely and prescribes prison terms for those deemed to have spread “false information” about the COVID-19 outbreak.

That the leaders of these two countries are indulging in antidemocratic practices during a health crisis should come as no surprise. For several years now, both Poland and Hungary have been retreating from the standards of liberal democracy, especially respect for the independence of the media, the judiciary, and other institutions that check abuses of power by elected governments. The evidence is powerful and has been validated by numerous neutral democracy monitors.

Thus it is acutely discouraging that the Polish and Hungarian governments continue to receive succor from partisan allies in the democratic world, especially the European Union and the United States, who apparently see their tactics as part of the normal give and take of electoral politics. These supporters, usually conservatives with a nationalist orientation, contend that any criticism of the direction taken by Poland and Hungary amounts to a double standard, or that it comes only from out-of-touch leftist elites.

They equate democracy with elections and elections only, suggesting that control of a legislative majority gives a government carte-blanche to demolish checks and balances and entrench itself in power. They ignore systematic offensives against judicial independence, the autonomy of local governments led by opposition mayors, scholars who challenge “official” interpretations of history, and ordinary citizens whose dissenting views earn them denunciations as traitors or corrupt cosmopolitan. They find justifications for every anti-democratic measure or policy and find tolerable actions—court-packing, for example-that would have immediately been denounced if taken by a liberal government.

Ever since PiS won power in 2015, it has moved to consolidate its control by infringing on the democratic rights of the Polish people. One of the first steps was to purge Polish public television of its independent journalists, turning it into a propaganda arm of the ruling party.

The government then launched a major drive to transform the judiciary into a pliant political tool. Two structural changes stand out for their extremism and vindictiveness: One allows the retrospective reopening of cases going back 20 years, opening the door to legal chaos and politically motivated abuses. The second facilitates the investigation and punishment of judges who criticize the new system.

The PiS leadership has put forward various rationales for these and other judicial “reforms.” But the real objective is clear. As other antidemocratic governments have done around the world, it is taming the judiciary in order to shake off the constraints of constitutional governance and the rule of law. It hopes to capture the private media, manipulate electoral mechanisms, dominate the economy, and generally do as it pleases to expand and perpetuate its own power.

If conditions in Poland are alarming, in Hungary they are already grim.

Not so long ago, Hungary, like Poland, was praised as a successful new democracy; now Freedom House’s Nations in Transit report places it in the “hybrid regimes” category, which it shares with countries like Serbia and Albania. In the decade since Fidesz gained power, Hungary has seen its judiciary politicized, its public and private media co-opted, its cultural space subjected to government interference, and its economy overtaken by an elaborate system of crony capitalism. The parliament has abandoned its oversight functions and no longer conducts serious debate over legislation. The political environment is anchored in propaganda-fueled hatred toward scapegoats including asylum seekers, George Soros, and the European Union.

Hungary’s descent from model democracy to quasi-autocracy is made worse by its self-proclaimed role on the international stage. Orbán no longer offers the pretense of identifying himself, his party, or his country with the values of freedom or democratic solidarity. He meets regularly with Vladimir Putin and has bent in Russia’s direction on crucial diplomatic issues like Ukraine. On the imprisonment or assassination of Russian journalists, activists, and opposition politicians, or on Russia’s aggression toward its neighbors, one hears no murmurs of disapproval from Budapest. Or, for that matter, from Viktor Orbán’s American supporters, who have argued that Hungary’s critics are driving a NATO ally towards closer ties to Russia and China. In fact, Orbán has made it clear again and again that, in the global struggle between democracy and authoritarianism, he is neutral.

All these developments underscore the sad reality that neither Orbán’s Hungary nor PiS-led Poland can be a reliable partner or model for those countries that care about the defense of democratic principles. Criticism of their dangerous turn is not rooted in partisan politics and cannot be dismissed as such. It is inspired by a concern for the values and institutions that make partisan politics—as well as fair elections, democratic governance, and the freedom of nations—possible in the first place.