Law and Justice has run amok with its parliamentary majority, but the people are pushing back. 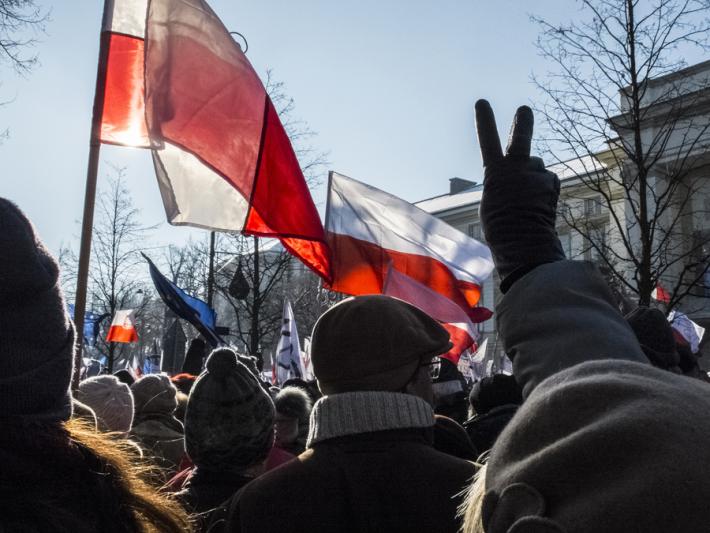 Law and Justice has run amok with its parliamentary majority, but the people are pushing back.

The past few days have been frantic in Poland. The ruling Law and Justice (PiS) party has pushed through a controversial bill that essentially bans counterprotests in the case of “recurrent assemblies” celebrating important historical events; instituted new rules that limit journalists’ access to parliament; and voted on the country’s 2017 budget in a side room outside from the main chamber, essentially in secret as both the opposition and the media were excluded.

This was the first time in Poland’s post-transition history that the governing party took a vote outside the main hall, and also the first time in more than 10 years that the opposition tried to block a parliamentary session. The events prompted numerous demonstrations, culminating in protesters blocking the parliament’s entrance and chanting “free media, free Poland” on Friday night.

But let’s not forget that things were similarly frantic at the end of last year. Barely a month after coming to power, PiS declined to appoint Constitutional Tribunal judges nominated by the previous parliament and submitted a bill that aimed to paralyze the court. The party also strengthened government control over state media and weakened civil service procedures after removing criteria for nonpolitical appointments. Poland’s parliament was operating in night sessions to adopt the new laws, with some being passed on Christmas or New Year’s Day.

A change so good it hurts

PiS and its leader Jaroslaw Kaczyński —who is the de facto head of the government but insists on being “just a regular MP”—say that they are on the right side of history and explain their ideological fervor with the need to cleanse Poland of the remnants of communism. But the “good change” that the party promised when it came to power last year has clearly morphed into a reckless and systematic undermining of checks and balances, and the rhetoric accompanying the party’s actions is chilling.

Friday’s protests were characterized as an “illegal attempt to seize power” by the country’s interior minister and reported as an effort to destabilize the state by public media. Kaczyński has called the demonstration in the chamber “parliamentary hooliganism,” and earlier in the week promised to “bring order” to the opposition—fittingly on the day the country marked the anniversary of the introduction of martial law in 1981. The very same language was used in connection with NGOs at the end of November, when the country’s prime minister, Beata Szydło, announced plans for a new department of civil society that would centralize state funding.

The legislative tsunami of the past year hit the Constitutional Tribunal the hardest. Since coming to power, PiS has amended the law on the Tribunal no less than seven times—six of which have been ruled unconstitutional by the court itself. The ruling party also appointed three of its own judges and declined to publish several of the Tribunal’s rulings, hence preventing them from becoming binding legal acts. International human rights organs condemned these steps, with the Council of Europe’s Venice Commission clearly stating they “endanger not only the rule of law, but also the functioning of the democratic system,” and the European Union launching a probe—the first of its kind—against the country.

But PiS has been unwavering and kept its eyes on the main prize—the seat of the chief justice. In early December, judges appointed by the governing party conveniently called in sick when the time came to pick a new chief, preventing a quorum. Now, that the term of the Tribunal’s current chief justice, Andrzej Rzepliński, comes to an end, the possibility that two separate Tribunals will function, and hand down contradicting decisions, is not unthinkable anymore. Such an absurd scenario would lead to widespread legal uncertainty and further damage the court’s already sagging reputation.

Nevertheless, Poland’s citizens and civil society are not standing by idly while the government is demolishing the country’s democratic institutions. There have been countless large demonstrations since PiS came to power, both in Warsaw and outside the capital, and the protesters even forced a government about-face in one case—the so-called black protests in October successfully prevented the further tightening of Poland’s already very strict abortion laws.

The current demonstrations also show that many deeply care about democratic values and have had enough of PiS’s autocratic governance style. Even though prime minister Szydło dismissed them as the grievances of those who had lost power and cannot accept it, people have continued to show up day after day, and thousands marched across the country carrying EU flags and chanting “democracy” both on Saturday and Sunday.

The next few days will show how powerful the protests are and how much the government is willing to listen. Although they might result in another small victory for those opposing PiS, the deterioration of democratic norms has become painfully evident this week, and it will take time to undo the damage. Kaczyński is unabashedly open about his disdain for rule of law and separation of powers and has clearly overstepped many democratic red lines so far. A complete government surrender and deescalation is hard to imagine therefore, but early elections are just as unlikely because the party has a majority in the Sejm.

One thing is certain. By brandishing those opposing it as traitors and the “worst sort” and now excluding them from political decision-making, the Polish government has reached a new and dangerous low. The people have spoken up; it is time for Europe and those caring about democracy to stop looking the other way.