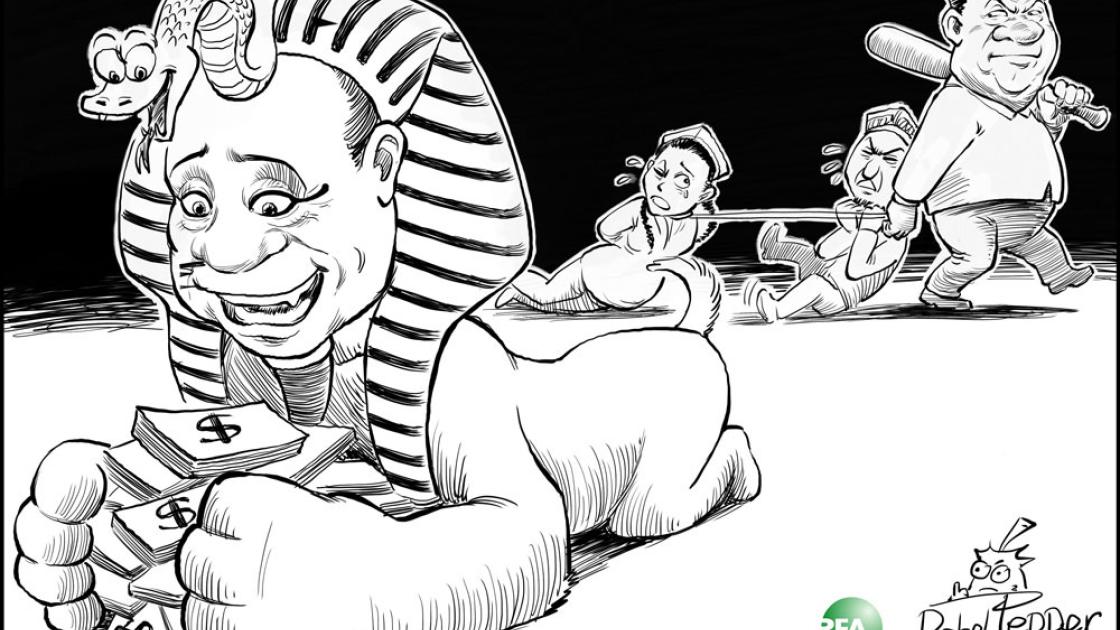 Political cartoon depicting the detention of Uyghur students in Egypt, and in some cases their deportation, at the apparent behest of the Chinese government. Image Credit: Credit: Rebel Pepper/Radio Free Asia.

As the Chinese Communist Party (CCP) prepares for its 19th Congress on October 18, restrictions on day-to-day freedoms in the country are becoming more intrusive. But such interference by the one-party state has also been expanding outside China, and the two phenomena are not unrelated. A series of recent incidents and analysis highlight both the depth of CCP influence operations overseas and the degree to which they are ultimately driven by domestic insecurities.

Using a variety tactics, Beijing has over the past three months apparently managed to affect immigration policies in Egypt, a vote in the California legislature, electoral choices in New Zealand, and media accreditation at the United Nations. It also attempted to dictate government invitations in Botswana and the choice of commencement speaker at a U.S. university. These cases may seem scattered, but there are reasons to suspect that something more systematic is taking place.

First, the topics and individuals that drew Beijing’s interest are each associated with an oppressed community within China.

In Egypt, for example, the authorities unexpectedly detained over 100 Uyghur Muslims, mostly university students who had valid residency permits. Several have since been deported back to China, while others fled toTurkey. In California, pressure from the Chinese consulate seems to have led state lawmakers to block a resolution expressing concern about human rights and the persecution of the Falun Gong spiritual group in China. And Chinese diplomats have lobbied both Botswana’s government and the University of California in San Diego (UCSD) to cancel appearances by Tibetan spiritual leader the Dalai Lama.

A former Chinese diplomat once referred to the Uyghurs, Falun Gong, and Tibetans — along with Chinese democracy advocates and supporters of Taiwanese independence — as the “five poisonous groups.” While these are all perennial targets, Beijing’s efforts to control news and information outside China have spread to other topics deemed detrimental to the CCP’s domestic legitimacy and unity, such as investigations into the wealth of party leaders’ relatives or allegations of wrongdoing aired by self-exiled billionaire Guo Wengui.

Second, the economic leverage that China has developed through years of engagement in areas such as academic exchange, financial investment, and tourism is now being deployed to suppress democratic rights and undermine autonomous decision making in other countries.

Implied threats of economic repercussions were at the center of letters sent by the Chinese consulate in San Francisco to dissuade California state legislators from passing the human rights resolution. The crackdown on Uyghurs in Egypt has coincided with increased Sino-Egyptian security cooperation, a visit to China in early September by President Abdel Fattah al-Sisi, and the signing of a memorandum of understanding for Beijing to finance a $739 million infrastructure project in Egypt. And after UCSD stuck to its invitation to the Dalai Lama to deliver a commencement speech in June, the China Scholarship Council announced in September that it would not process any new applications to study at the California school.

Third, the CCP’s individual acts of interference abroad often have effects that reach far beyond the immediate targets.

The China Scholarship Council’s decision on UCSD sends a signal to other universities that speaking engagements by high-profile critics of the Chinese government can have profound costs, both for the university itself and for prospective Chinese students and scholars. And when the United Nations’ media accreditation unit, under suspected Chinese government influence, denied access for the New York-based New Tang Dynasty Television (NTD) to cover the UN General Assembly last month, millions of Chinese-speaking viewers in the United States, China, and elsewhere were deprived of an independent perspective on the gathering, including debates about North Korea and other issues of global importance. (Online rankings suggest that NTD is more popular in the United States than China’s state broadcaster, and Beijing has taken other measures to curb its influence.)

The NTD case is also part of a larger pattern of Chinese government efforts to silence its critics at the United Nations. A September 5 Human Rights Watch report on the subject notes: “Taken individually, many of China’s actions against NGOs might be viewed as an annoyance or an irritant. But taken together, they amount to what appears to be a systematic attempt to subvert the ability of the UN human rights system to confront abuses in China and beyond.”

A scholarly study published on September 18 finds that the CCP’s foreign influence activities are widespread, part of a global strategy, and have accelerated under the leadership of President Xi Jinping. The report’s author, Anne-Marie Brady, details how the party’s United Front Work Department strives to “guide, buy, or coerce political influence” among both overseas Chinese communities and foreigners. These efforts date back decades, but China’s growing economic and geopolitical clout, as well as a deliberate policy of expansion under Xi, have translated into a far more powerful impact on other countries and their democratic institutions. According to Brady, the CCP’s influence operations “have the potential to undermine the sovereignty and integrity of the political system of targeted states.”

This danger is palpable even in well-established democracies. In New Zealand, for instance, a long-term effort by the CCP to influence Chinese-language media coverage and local politics in the ethnic Chinese community has reached the point that, according to one Chinese scholar commenting on the country’s September elections, “the Chinese community can only realistically aspire to political representation by its own members through individuals approved by Beijing.”

Beijing’s various initiatives to exercise influence abroad are often referred to in media and policy circles as examples of the country’s growing “soft power.” This characterization is misleading. The CCP is not just protecting or burnishing China’s international image or even its own. Rather, Chinese diplomats, party officials, and their proxies are aggressively meddling in democratic societies, damaging democratic and international institutions, and undermining human rights protection in foreign lands, even if a primary motivation is to combat what are ultimately domestic challenges to CCP legitimacy.

It is critical that democratic governments and international organizations recognize the danger these trends pose, understand the complex factors involved, and learn how to identify the CCP’s footprint, especially when its actions undercut democratic norms such as media freedom, academic freedom, and transparency.

Absent a vigorous and coordinated response, the many Chinese citizens fighting for their rights at home will lose vital international support, and the rest of the world will be more thoroughly introduced to the fear, intimidation, and censorship so common in China under the CCP’s authoritarian rule.

Sarah Cook is a senior research analyst for East Asia at Freedom House and director of its China Media Bulletin.

This article was also published by the Diplomat on October 10, 2017.