The trend coincides with a global decline in democracy. 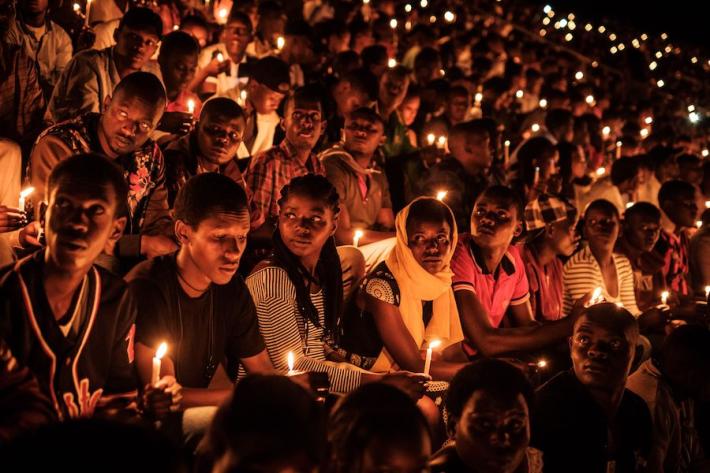 The trend coincides with a global decline in democracy.

This month marked the 25th anniversary of the genocide in Rwanda. According to UN estimates, some 800,000 people were shot, hacked, and bludgeoned to death by extremist members of the Hutu ethnic group who were attempting to wipe out the ethnic Tutsi minority.

Rwanda’s genocide stands out among other mass atrocities for its deeply personal nature. While many victims were slaughtered by the Interahamwe, an extremist Hutu militia, many others, especially in the provinces, were killed or maimed by their own neighbors or even family members, people they had lived among all their lives. The genocide was also remarkable for the frenzied intensity of the killing, with 70 percent of the Tutsi population massacred in just 100 days. The roster of victims included moderate Hutus, some 30,000 of whom were killed for refusing to join in the mayhem.

There is strong evidence that the horror in Rwanda was preventable. People inside the country alerted diplomats that something terrible was about to happen. Roméo Dallaire, the head of a UN peacekeeping force, begged for permission to intervene early on. His pleas were rebuffed; the United States, intent on avoiding involvement in the conflict, conducted a determined campaign to prevent the United Nations from using the word “genocide” to describe the slaughter.

An ongoing international failure to protect

The atrocities in Rwanda played a major role in spurring the development of a new concept in international affairs. Dubbed the Responsibility to Protect (R2P), it obliges states to protect all populations from genocide and ethnic cleansing, and to act before the killing begins. Chastened by events in the Balkans as well as Rwanda, every country in the world signed a commitment to R2P at a 2005 UN conference.

Things have not gone well for humanitarian intervention, or democracy, since then. The year 2005 marked the beginning of what has become a 13-year decline in global democracy, based on Freedom in the World data. As the United States has stepped away from international leadership on democracy and human rights, autocrats have been more willing to embrace extreme solutions to suppress minority groups or strengthen political control. The number of countries earning a Freedom House score deduction for ethnic cleansing or other forms of forced demographic change was just three in 2005. By 2018, the number had increased to eleven.

Indeed, certain global trends suggest that industrial-scale ethnic cleansing is increasingly likely in some settings, and that a catastrophe of Rwandan proportions is not out of the question. While current examples do not yet rise to the level of Rwanda’s genocide, several rank among the great politically driven tragedies of modern times. In the most extreme cases, such as Syria and Myanmar, hundreds of thousands have been killed or displaced, and crimes against women have reached epidemic levels.

There are also signs that social media may come to play a role similar to that of radio in Rwanda. In 1994, Mille Collines, a Hutu extremist radio station, worked to inflame popular support for mass murder. Day after day, it broadcast a “kill or be killed” message, describing Tutsis as “cockroaches” and warning Hutus that they would suffer a dire fate if they failed to participate. Analysts studying the state-led violence against the Rohingya minority in Myanmar since 2017 have noted a coordinated social media campaign, apparently organized by the military, aimed at demonizing the group and justifying atrocities against them.

Toward a new authoritarian norm

While genocide and ethnic cleansing have often occurred under the cover of armed conflict, modern authoritarian states are honing techniques that incorporate coerced demographic change into their day-to-day governance. In China, the Communist Party leadership has launched an aggressive campaign of cultural suppression in Xinjiang, the traditional homeland of the Uighurs. Over one million Uighurs and other Muslim ethnic minorities have been dispatched to de facto concentration camps where authorities seek to forcibly purge them of their distinct beliefs and identities and inculcate absolute loyalty to Beijing.

The campaign involves targeting scholars and intellectuals to rob minority communities of their cultural leaders, separating children from their parents and enrolling them in orphanages and boarding schools, dispersing Uighur prisoners to other provinces, and encouraging migration of Han Chinese to Xinjiang to further dilute the minority population. Meanwhile, the remaining Uighur neighborhoods have been transformed into high-tech encampments with a pervasive police presence and a surveillance regime that makes use of the most sophisticated artificial intelligence innovations.

These cold-blooded policies have met with little serious international opposition. With the partial exception of Turkey, leading Muslim-majority countries have generally reaffirmed their warm relations with China and declined to issue a murmur of protest over the reeducation camps. In fact, China and Russia are the keystones of a burgeoning league of autocracies that has provided crucial diplomatic and sometimes military and security support for regimes engaged in mass atrocities, most notably in Syria and Myanmar.

At the time of the Rwandan genocide, both Rwanda and the former Yugoslavia were isolated trouble spots in a world where peace and democracy were otherwise on the rise. That atrocities were allowed to unfold there was seen as a terrible case of negligence by the international community, which obviously had the ability to intervene. Today, that is far from clear. Gross human rights violations are being perpetrated not just by rogue states or militias, but by autocratic powers making a bid for global leadership, even as democratic countries descend into growing disarray. Until this broader pattern is reversed, outbreaks of ethnic cleansing and genocide will only become more common.