The United States is convening a Community of Democracies conference, but does it still believe in the organization’s mission? 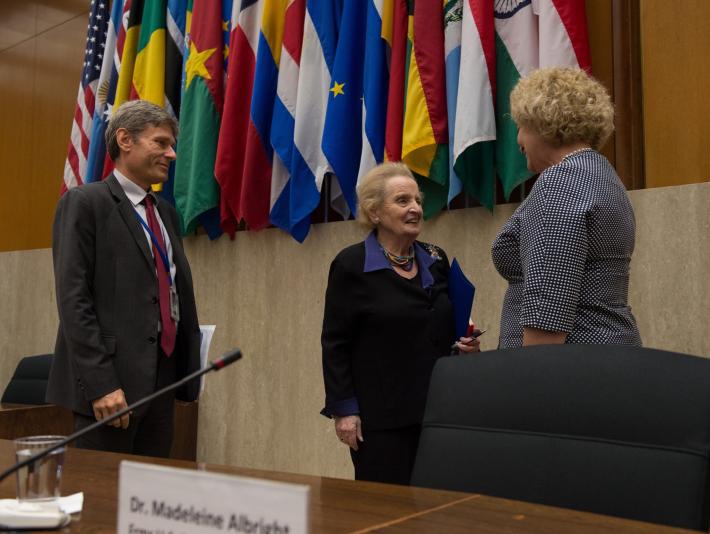 The United States is convening a Community of Democracies conference, but does it still believe in the organization’s mission?

The world’s aspiring democracies and human rights defenders have long looked to the United States for leadership and active support. As hundreds of diplomats and frontline activists from around the globe convene in Washington this week for the biennial conference of the Community of Democracies, they will want to hear their host, Secretary of State Rex Tillerson, confirm that contrary to a series of words and actions at the highest levels of government over the past nine months, the Trump administration will not abandon the bipartisan U.S. commitment to promoting democratic principles and values, which have traditionally defined America’s engagement with the rest of the world.

The administration has an important opportunity and an obligation to reassure skeptical partners that it understands the fundamental role of democracy in building stable, peaceful, just, and prosperous societies—and that democracy’s advance is a core American interest. But a single dose of rhetoric to that effect will not suffice, not when the value and efficacy of supporting democracy and confronting antidemocratic abuses have been called into question by the president himself, and when the White House has proposed steep cuts in funding for such efforts, which already represented a paltry percentage of the overall federal budget.

U.S. action in this sphere has never been more critical. Liberal democracy is under assault by a new, more savvy generation of authoritarian rulers and by rising populist movements in existing democracies. Modern authoritarianism has succeeded where older, totalitarian systems failed thanks to new, more refined tactics that allow repressive regimes to ensure dominance while maintaining a veneer of order, legitimacy, and prosperity. Even as they crush dissent at home, they have exploited the openness of democratic societies to spread illiberal ideas and weaken vital institutions abroad.

Leading from the front

The Trump administration urgently needs to demonstrate a willingness to help lead the global democratic community. It must prove through both words and deeds that it remains committed to providing moral support as well as tangible assistance—financial, technical, diplomatic—to nascent or vulnerable democracies. It should make clear to governments that deny fundamental freedoms to their own people and seek to undermine them elsewhere that the United States unequivocally stands with its fellow democracies and democracy advocates.

For example, aggressively using the Global Magnitsky Act to impose targeted sanctions on individuals who engage in large-scale corruption or perpetrate human rights violations would send a strong message that the administration is serious about the battle against impunity. Those who pilfer public wealth or trample on fundamental human rights should not be allowed to travel to the United States, invest and launder their funds here, or even send their children to American universities.

Making clear that the United States will continue to engage actively in the Community of Democracies now that its two-year presidency has drawn to a close would likewise convey an important message to the assembled diplomats and activists. The administration would find enthusiasm for such a policy on Capitol Hill, where there is strong bipartisan support for U.S. leadership in promoting democracy worldwide, including through on-the-ground programming.

A vision of global solidarity

The Community of Democracies was established almost 20 years ago precisely to provide support to countries that are committed to following the democratic path, with the goal of strengthening democratic institutions, practices, and values in keeping with the principles enshrined in its founding document, the Warsaw Declaration.

The United States was instrumental in launching the historic initiative, working closely with like-minded governments in countries such as India, Poland, Chile, and South Korea that had forged their own inspiring paths to democracy. The organization was a powerful reminder of democracy’s spread worldwide, including to parts of the former Soviet empire and in the Global South, and it reflected the infectious optimism that democracy had emerged as the only viable way to govern a modern country.

The global political landscape has changed dramatically since those heady years. The assault on the democratic world from resurgent authoritarian states and growing disenchantment among its own citizens have led to a major loss of confidence in democratic progress.

The Community of Democracies could be one of the international platforms that helps galvanize democratic leaders and societies to double down on the principles of political freedom and broad-based participation in civic life. Like any multilateral body, the Community of Democracies is only effective if its participating states are prepared to invest the time and energy needed to turn a laudable vision into reality.

Despite some structural handicaps, the Community of Democracies can point to some tangible progress. It worked to mobilize additional resources for countries such as Tunisia, Ukraine, and Myanmar during perilous and difficult democratic openings. It has helped democratic governments to collaborate more effectively around democracy-related issues in international forums, produced an authoritative analysis of Hungary’s noncompliance with the Warsaw Declaration principles and commenced a dialogue with the Hungarian government, elevated the visibility of the larger democracy agenda at the United Nations through its work on the new Sustainable Development Goals, and laid the groundwork for cooperation to prevent or address threats to civil society though one of its several working groups.

The Trump administration could work with other leading member states that have made a commitment to reinvigorate the Community of Democracies, to make it the global catalytic force its founders envisioned. Civil society activists and many governments certainly harbor strong doubts about the administration’s interest in making it a foreign policy priority to strengthen democratic norms and institutions. Secretary Tillerson should not squander the chance to convince them otherwise, and for the United States to play a significant role in renewing the international democracy-support enterprise that it helped to inspire.