The health crisis has provided both motivation and cover for increased persecution of minority faith groups. 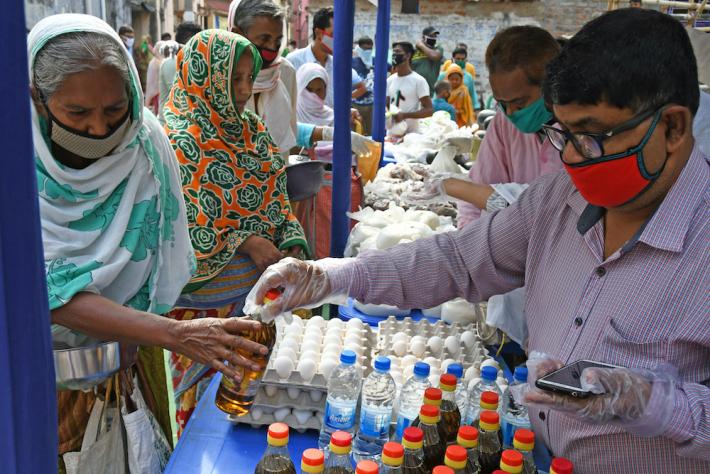 Volunteers in India distribute food during the month of Ramadan to people who are unable to make money in the emergence of COVID-19. Image credit: Sanjoy Karmakar / Shutterstock.com

At the height of the Black Death in the 14th century, rumors circulated throughout Europe that Jews were deliberately transmitting the plague by poisoning wells. Rather than quell these rumors, some governments effectively endorsed them and incorporated them into official policy. In 1349, the city fathers of Brandenburg passed a law that preemptively condemned the Jewish community for spreading the disease:

Should it become evident and proved by reliable men that the Jews have caused or will cause in the future the death of Christians, they shall suffer the penalties prescribed by law, as it is said that the Jews have elsewhere dispatched many person through poisoning.

Similarly during the latest global pandemic, some governments have blamed minority faith groups for the outbreak of the coronavirus and used the crisis to justify further repression of religious communities that had already been suffering from severe marginalization.

As governments around the world respond to COVID-19, local activists and democratic partners must help ensure that political leaders are not exacerbating tensions between religious groups, and that official actions aimed at fighting the virus do not single out and restrict the rights and religious practices of minority faith communities.

Hate encouraged from the top

In a number of countries that have faced outbreaks of the coronavirus, political leaders have verbally lashed out against certain religious minorities, using hateful language in their speeches, official statements, and social media posts that has widened social divisions and fueled bigotry among their supporters.

Over the past several weeks, India has emerged as the most prominent example of this phenomenon. As media outlets and human rights organizations—including Freedom House—have reported, prominent politicians in the right-wing government of Prime Minister Narendra Modi have demonized the country’s Muslim community, which they hold responsible for spreading the coronavirus.

Yet India is hardly the only country whose officials’ words have reinforced widespread prejudices against religious minorities. In Cambodia, for instance, a Facebook post in March by the Ministry of Health referenced groups of people who had contracted the virus, including adherents of “Khmer Islam.” The post was followed by a barrage of hateful online comments aimed at the country’s small Muslim community. Despite the government’s subsequent attempts at damage control, Cambodian Muslims have since reported facing increased discrimination from their Buddhist neighbors.

In addition to engaging in divisive language, some leaders have implemented policies that disproportionately hinder the rights and freedoms of their nation’s minority religious groups, supposedly as a means of combating the spread of the coronavirus.

Officials in Pakistan’s Balochistan Province have blamed Shia Muslims from the ethnic Hazara minority for the spread of the coronavirus. In the provincial capital, Quetta, authorities completely sealed off two Hazara areas, forbade government employees from traveling to Hazara neighborhoods, and furloughed Hazara policemen due to a suspicion that they were infected.

Similarly in Saudi Arabia, where Shias are in the minority overall, the Shia-majority governorate of Qatif was placed under full lockdown on March 9, after a group of Shias tested positive for COVID-19 following religious pilgrimages to Iran. Because Qatif was the only governorate to be completely locked down, the actions drew charges of unfair treatment from Shia residents, who have long been marginalized by the Sunni-dominated government in Riyadh. The lockdown has been eased in recent weeks, but a curfew and other severe restrictions on movement are still in place. Some analysts worry that the regime will weaponize the crisis to extend some restrictions indefinitely, preventing Shias from strengthening ties with their coreligionists in neighboring countries.

In Buddhist-majority Sri Lanka, the government has needlessly suppressed the Muslim minority’s burial practices by making cremations compulsory for coronavirus victims. International experts say that burial and cremation are both acceptable ways of dealing with the bodies of COVID-19 victims, and Sri Lankan Muslim leaders and human rights groups argue that the cremation decree is a violation of religious freedom. Resentment against the policy has deepened since a Muslim family claimed that authorities coerced them to sign a consent form for a family member’s cremation, despite subsequent tests showing that she did not die of COVID-19.

Some governments have also discriminated against religious minorities by excluding them from programs aimed at assisting COVID-19 victims, or by providing them with less support than is offered to citizens from the majority group. In some areas of Pakistan, for example, authorities have reportedly refused to give food aid to Christians and Hindus, stating that assistance is reserved for Muslims. In India, both private and government-run hospitals have been accused of providing Muslim COVID-19 patients with lower-quality care. In the state of Gujarat, which is governed by Prime Minister Modi’s Hindu nationalist Bharatiya Janata Party, a government hospital is placing Muslim and Hindu coronavirus patients in separate wards, prompting accusations of apartheid.

The need for vigilance

In each of these cases, the scapegoating has not occurred in a vacuum. Rather it has come after years or even generations of social and political marginalization. This reality underscores the need for international partners and local human rights activists to combat all forms of discrimination and bigotry during ordinary times, because such patterns can erupt into something far deadlier during a period of crisis like a global pandemic.

Many countries whose governments are deeply antagonistic toward minority faith groups have not yet faced coronavirus outbreaks on the scale of those in India or Pakistan. As more nations experience massive increases in new COVID-19 cases, defenders of fundamental rights should pay close attention to elites’ rhetoric and policy choices vis-à-vis religious minorities and other vulnerable communities, who will likely bear the brunt of any effort to shift blame for flawed government responses and the suffering of the population as a whole.