Why We Should Be Worried about India's Response to Coronavirus

The coronavirus pandemic emerged as national authorities are enacting discriminatory measures against India’s Muslim minority. Now, Muslims are being blamed for the pandemic. 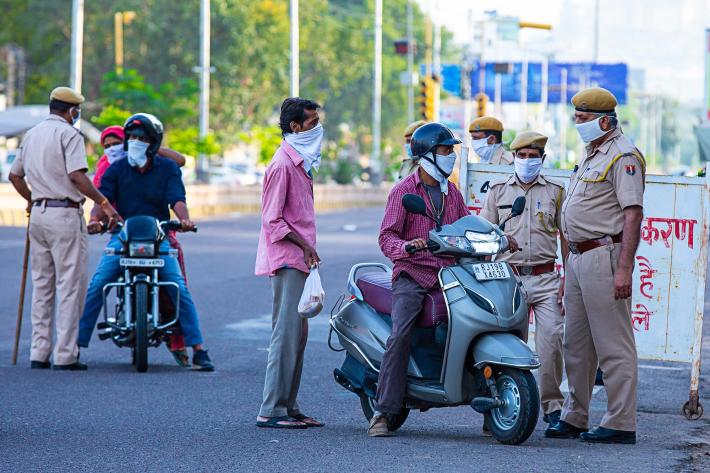 Police in India are stopping citizens and commuters after government placed the entire country on lockdown to prevent the spread of coronavirus. Editorial credit: stockpexel / Shutterstock.com

The COVID-19 pandemic arrived in India against a backdrop of intensifying discrimination against the country’s Muslim minority. Since winning elections in 2014, Prime Minister Narendra Modi and his Bharatiya Janata Party (BJP) have pursued a stridently Hindu nationalist agenda that has damaged India’s democracy. The country’s response to the virus, and the government’s actions while international attention remains focused on the pandemic, should be carefully scrutinized to ensure that emergency restrictions do not cause further harm.

An outgrowth of a Hindu nationalist militant group, the BJP has not only tolerated prejudice against Muslims; it is now cementing this discrimination into government policies. Following the BJP’s victory in spring 2019 general elections, the central government escalated its attacks against India’s Muslim population, and with that accelerated the country’s democratic decline. In August, the semiautonomous status of the only Muslim-majority state, Jammu and Kashmir, was unilaterally revoked by the Indian government, and the state placed under lockdown. Shortly thereafter, the state of Assam unveiled a citizens’ register that rendered almost two million people stateless, many of them Muslims. In December, the government enacted the Citizenship Amendment Act. The law accelerates the citizenship process for members of six religions, but excludes Muslims, leading to fears that, if coupled with a national citizens’ register, longtime Muslim residents of the country will be deported en masse.

Protests against the law’s discriminatory nature were held across India, and in February of this year, during a sit-in in New Delhi, violence broke out between Hindu and Muslim groups. Mounting evidence suggests that police officers neglected to intervene, and in some cases even participated in attacks against Muslims. Over 50 people died, most of them Muslims, and thousands were left homeless. As the virus spreads and emergency measures are introduced, those displaced are now at particular risk of contracting the virus. Thousands of the displaced had been living in camps, which were closed last month amid the lockdown, forcing them to return to destroyed homes.

As the coronavirus spreads across the globe and within India, the BJP has played a key role in disseminating disinformation and hate speech that blames Muslims for the pandemic. After the government revealed that over 1,000 cases were connected to a meeting held last month by the Muslim missionary group Tablighi Jamaat, hashtags like #CoronaJihad began circulating on Twitter. A cabinet member likened the event to a crime by the Taliban, while high-ranking BJP members have referred to it as an “insurrection” and “terrorism.” Meanwhile, false news about Muslims purposefully spreading the virus has been circulated by media outlets and social media users. A newspaper in Karnataka published a front-page story claiming that Muslims were responsible for spreading the virus, and accusing them of violating lockdown measures, for example.

This rhetoric has the potential to exacerbate intercommunal tensions. Muslims have already been forced out of their homes by suspicious neighbors, and at least one attendee of the Tablighi Jamaat meeting was badly beaten. It could also encourage the selective denial of medical treatment. Recently, a pregnant Muslim woman was denied admittance to a hospital because of her religion; her newborn baby later died, in the absence of prompt hospital care.

The lockdown of Jammu and Kashmir reveals how even more heavy-handed tactics can put minority groups at risk as the virus spreads. Notably, an internet blackout that began in August and lasted into 2020 marked the longest such shutdown ever imposed by a democracy. Connectivity was partially restored earlier this year, but remains limited to 2G mobile connections. The slow speeds have severely limited people’s ability to access trustworthy information about the virus. Doctors based in Indian Kashmir have been unable to attend online trainings on the use of vital equipment or download medical guidelines, while students cannot access online classes. Health resources are also severely lacking, and the territory has one of the lowest doctor-patient ratios in the country. Meanwhile, police officers and paramilitary forces have reportedly attacked residents for violating curfew orders, and over 600 people have been arrested. And, there remains enough connectivity for misinformation, including fake remedies, to spread.

Amidst these attacks, institutions that could provide a check against Hindu nationalism, such as an independent judiciary, are under threat. Recently, a judge from the Delhi High Court was immediately transferred after pressing the police to investigate the use of hate speech by BJP politicians against Muslims and admonishing the police for standing by during the February riots. Other checks have receded as tackling the coronavirus takes priority. Under the lockdown, protesters that had been holding a months-long sit-in against the Citizenship Amendment Act were dispersed by police, who also razed the area as social media users and Hindu nationalists called to empty it out. Meanwhile, a challenge to the law before the Supreme Court has reportedly been postponed due to the lockdown. At the same time, a large detention center that could hold alleged foreigners remains under construction in Assam. And two week ago, the government changed a domicile law in Indian Kashmir that could pave the way to demographic change and transform Muslims into a minority.

Other vulnerable populations in India are also at acute risk. Late last month, as the Indian government imposed a 21-day, countrywide lockdown, hundreds of thousands of newly homeless and jobless migrant workers set out to walk home, many for hundreds of miles, only to become stranded. Reports of abuses against them soon spread, including of health workers dousing them with disinfectant intended to clean buildings.

In light of India’s weakening institutions, and countrywide emergency initiatives aimed at halting the spread of COVID-19, the fundamental rights of people in India—and minorities and other vulnerable populations in particular—are at risk. It is imperative to ensure that the coronavirus is not used as a front to further chip away at Indian democracy, especially at the expense of minority groups.

The government’s response to the pandemic should adhere to international human rights principles, as articulated by Freedom House and others, for protecting civil and political rights in the fight against COVID-19. In particular, the duration of emergency restrictions should be limited, independent oversight must be ensured, measures should be transparent, and individuals must be able to seek remedies if their rights were unnecessarily or disproportionately violated. Failing to do so could lead to further discrimination and deeper deterioration in the world’s largest democracy.