Turkey: In the Wake of the Referendum, the Crisis Deepens

The deeply flawed vote has left the president with little democratic legitimacy. 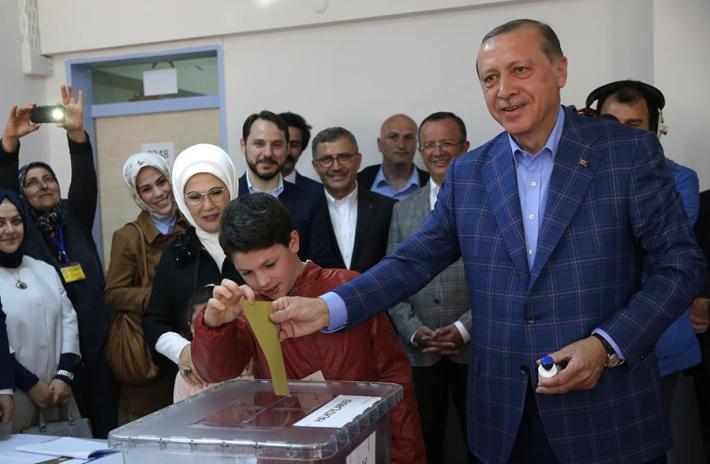 The deeply flawed vote has left the president with little democratic legitimacy.

On Sunday, Turkey held a nationwide constitutional referendum. At stake in the simple majority vote was a vast package of amendments to 72 articles of the constitution with the aim of transforming the parliamentary republic into a fully presidential system, concentrating power in the office held by Recep Tayyip Erdoğan.

The president and his Justice and Development Party (AKP) have claimed victory, but the lengths they went to in order to succeed, the manifest flaws on the day of voting, and blunt criticism from an international monitoring mission may have cost them more than the referendum was worth.

Most shockingly, as the polls were about to close, the YSK announced that it would accept votes that had not received the official seal of the local polling station—in other words, the stamp that proves the ballot came from the polling station, and not from somewhere else. The YSK explained the decision by claiming that a number of stations had used the wrong stamp by accident, but it also noted that the decision was based on complaints from the AKP, and was taken “so that the will of the voter could be heard.”

The opposition claims that several million such votes were accepted, enough to swing the outcome. There is no way to know: The YSK admits that it is not sure how many were accepted, and the ballots may have been stamped during the counting anyway, rendering them indistinguishable from properly validated votes.

The preliminary conclusions of the international observation mission of the Organization for Security and Co-operation in Europe/Office for Democratic Institutions and Human Rights (OSCE/ODIHR) were harsh. Even with its characteristic understatement, the mission could not avoid describing the extent of the damage to Turkey’s electoral system. The report observed that the campaign took place on an unlevel playing field, in an atmosphere where fundamental freedoms had been curtailed. Most strikingly for Turkey, whose reputation as a democracy has increasingly rested on the narrow credential of fairly counted votes, the mission expressed sharp concerns about the administration of the referendum. The YSK’s decisions were nontransparent, and many were not even published; the mission said that the last-minute decision to allow unstamped ballots to be counted as valid removed an important safeguard against fraud and contradicted Turkish law. OSCE/ODIHR statements do not get much stronger.

As the polls closed, representatives of the opposition went on television to say outright that according to their data, including from representatives at the YSK, “No” had won. But the government was prepared for this. Ever since the crackdown on the Gülen movement and the shuttering of its affiliated Cihan News Agency, the only media outlet with direct access to the YSK’s official results as they are reported has been the state news agency, Anadolu. All media in the country receive their results via Anadolu until the YSK posts its official conclusions. The referendum provided a perfect example of why it is important to control which results are published first.

Anadolu and the state broadcaster TRT dashed far ahead of the YSK’s reporting, showing “Yes” well in front and even announcing that the referendum had passed, creating a narrative of victory while opposition leaders were arguing on live television that they would dispute millions of ballots. Prime Minister Binali Yıldırım (whose job will cease to exist when the constitutional changes are implemented) and Erdoğan gave speeches announcing their win. International news media waited a few hours and then largely went along, reporting a narrow victory for “Yes” while noting the opposition objections. Using his control over the media and the reporting of the results, Erdoğan won the narrative battle before it even started.

Moreover, his control of the courts and the YSK means he does not have to fear a retroactive challenge. The chances of the opposition winning enough complaints to change the outcome are zero. After the March 2014 mayoral election in Ankara, an even closer vote with signs of malfeasance, the courts refused to entertain opposition complaints, to the extent that the Constitutional Court in a Kafkaesque decision eventually concluded that the losing side had no standing to challenge the vote.

Pushing through such wide-ranging constitutional changes on such dubious grounds leaves Erdoğan more isolated at home and abroad. “No” won in four of Turkey’s five largest cities, while “Yes” racked up its margins in rural areas and performed surprisingly well in the mostly Kurdish southeast, where security operations have been intense—another factor that raises concerns about the validity of the ballots.

The purge of the country’s civil service and civil society will also now deepen. Less than 24 hours after the polls closed, the government announced that it was extending by another three months the state of emergency that has been in effect since the coup attempt last July, under which more than 40,000 people have been arrested and 130,000 fired from state jobs.

The United States and the European Union issued statements that stressed concerns about the vote, including those raised by the OSCE. As Turkey’s crackdown on dissent has widened over the last four years, Erdoğan’s best argument to the international community has been that he has democratic legitimacy, premised on a long-standing idealization of Turkey’s manifestly flawed electoral system and extremely one-sided electoral environment. The referendum’s narrow result, the conditions associated with the state of emergency, the opposition’s open challenges, and the OSCE’s uncharacteristically frank conclusions all undermine Erdoğan’s claim that he is, when all is said and done, the embodiment of the “national will.”

Erdoğan today said that the next referendum could be to reintroduce the death penalty, and cast Sunday’s vote as a rebuke of the West. With his domestic legitimacy weakened, he will lean more and more on the notion that Turkey is under threat from external enemies, as he did throughout the last month of the campaign.

Since 2013, Turkey has been living through a series of deepening crises that are largely of Erdoğan’s making. The unfortunate outcome of this flawed referendum is that the current crisis will now grow even more profound.