The Twilight of Putinism

The election may be in the bag, but in many other ways Russia is going off the rails. 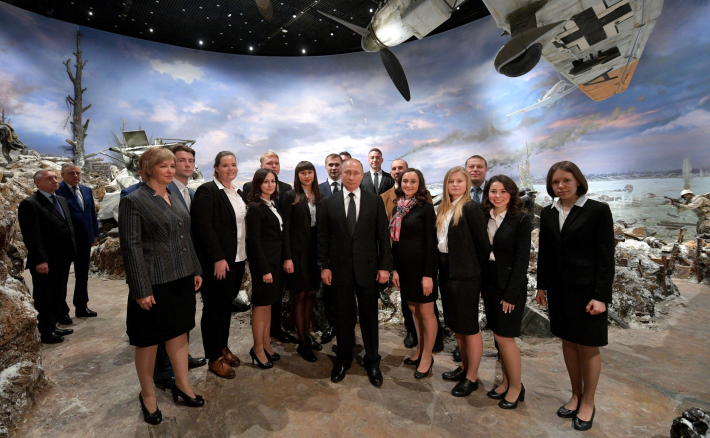 The election may be in the bag, but in many other ways Russia is going off the rails.

This weekend, Vladimir Putin will win reelection to the presidency of the Russian Federation, besting a parade of jesters and pocket candidates who were chosen to placate different demographics—elderly Communists, nationalists, yuppies—without offering any real competition. Putin’s only plausible rival for the post, the charismatic anticorruption campaigner Aleksey Navalny, was banned from running due to a prior conviction on cooked-up embezzlement charges that have left his brother sitting in prison.

Putin’s reelection will come amid a still-growing crisis over the poisoning of former spy Sergey Skripal in the United Kingdom last week. The British government has said definitively that Russia is responsible for the poisoning—a highly credible accusation, considering that the nerve agent used was developed in the former Soviet Union and possessed only by the Russian government. In many ways, the Skripal affair embodies the main dynamic of late Putinism, in which tactical daring has replaced strategic coherence, leaving Russia increasingly boxed into a corner.

A costly display of power

Over the last six years, Putin has sought to shift the conversation from Russia’s stagnating economy with a series of bold foreign policy plays that would “bring Russia off its knees.” Since his return to the presidency in 2012, Russia has occupied Crimea and invaded eastern Ukraine, saved Bashar al-Assad in Syria and made itself an indispensable actor in the Middle East, and interfered in the American elections with the goal of supporting a candidate who would erode America’s global leadership.

But scratch the surface and it becomes clear that the sum total of these foreign policy moves is nothing to crow about. Putin may delight in how powerful he appears in the Western press, but the bogeyman role has long-term costs. Russian interference in the United States, whatever its immediate benefits, has alienated the entire corps of national security professionals who inform and execute U.S. foreign policy. And it is unimaginable that any future Republican or Democratic administration will have the domestic political room to cut a deal with Russia. The same is now happening in the United Kingdom, where the Skripal poisoning could be the last straw for a government that has been loath to confront Russian money laundering and intelligence operations.

Regarding Ukraine, the seizure of Crimea is supposed to be Putin’s great achievement, but it has frozen relations with Europe and the United States, leaving them no realistic option for deescalating sanctions. Even more important, the eastern invasion has turned a whole generation of Ukrainians against Russia, fostering a climate of nationalist defiance that grows more entrenched with every soldier killed on the front line. Russia’s seemingly permanent loss of Ukraine—the largest post-Soviet republic after Russia—as a potential partner is a foreign policy catastrophe.

Finally, by focusing so intently on his rivalry with the West, Putin has failed to develop any credible Eastern strategy. After many years in which it avoided Russia’s security sphere in Eurasia, China is building a military presence in a remote part of Tajikistan bordering Xinjiang and Afghanistan, infringing on territory that Russia has jealously guarded as the edge of its privileged zone of influence.

There is little Russia can do if China decides to assert its interests over Russia’s in Central Asia; it surpassed Russia as the top investor in the region years ago. Russia itself is locked into a subservient gas supply deal with China that Putin signed in the aftermath of the Ukraine invasion, when he was desperate to put up a positive headline and show that the country could find trade partners despite Western sanctions.

And none of these foreign policy “achievements” can paper over troubling domestic trends. The sanctions and an oil price crash in 2014 drove the Russian economy into recession for two years. Gross domestic product at the end of 2017 was the same as in 2013. The country is creeping back to growth as oil prices have stabilized, but it will remain far from robust: 1 to 2 percentage points are forecast through 2019. The country’s Reserve Fund, built up in flush times to cover future budget deficits, has been drained dry. Despite the elaborate promises in his recent state of the nation speech, Putin will have to shrink the budget even further after the election.

Though he won’t let them affect the vote itself, the political consequences of this economic stagnation are already visible. The ruling elites, forced to share a smaller pie, have begun to turn on one another. There have always been squabbles among the oligarchs and cronies, but Putin was able to keep them within certain limits. Not anymore. A maneuver in which Igor Sechin, chairman of the state oil firm Rosneft, blatantly entrapped Minister of Economic Development Aleksey Ulyukayev in a bribery scheme and then ratted him out to investigators was a violation of the thieves’ code that had prevailed inside the regime’s top echelons.

The poisoning of Skripal only adds to the perception that Putin, whose watchword has been stability, is losing his grip. If he approved an operation to use a nerve agent in the United Kingdom, he is no longer weighing costs and benefits competently. If other Russian state actors went ahead without his approval, he is no longer holding the reins on the state’s most sensitive operations.

A man without a plan

Putin will win on March 18, and barring a health crisis he will rule Russia until 2024. He will argue that he brought Russia “back” to global prominence. But Russia, as a nuclear power and a permanent member of the UN Security Council, was never going anywhere. What Putin has achieved instead is to ensure that Russia is seen as both arsonist and firefighter, an unavoidable but also destructive force, among those trying to resolve thorny international problems. He may revel in the role, but it will do his country no favors, either now or in the future.