In the absence of effective state responses, civic groups in Belarus, Russia, and Azerbaijan are tackling the COVID-19 pandemic. Their efforts are drawing strong public support and sparking previously unlikely collaborations. 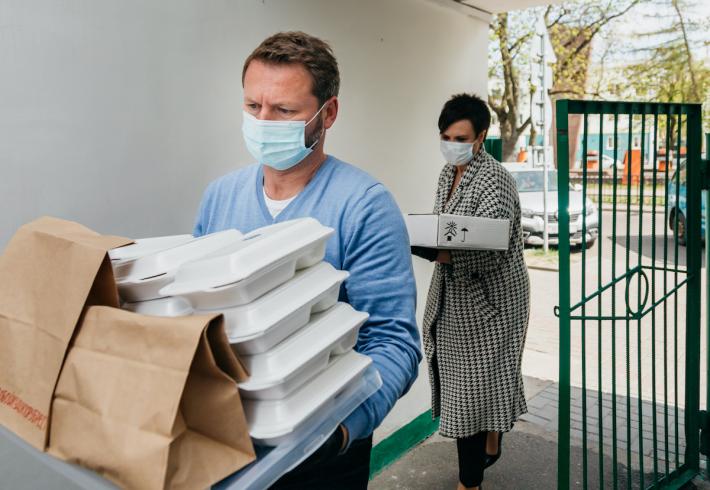 The unprecedented and indiscriminate coronavirus crisis is exposing some of the most hardened authoritarian governments of Eurasia—Belarus, Russia, and Azerbaijan—as incapable of providing public-health protections. Amid this vacuum, civic groups are stepping up to identify needs and mobilize resources in areas that are normally the domain of government agencies, including public education, social protections, and public safety.

This real-time illustration of the “government failure” model of civil-society development shows that even in countries where the nonprofit sector has faced persecution for decades, civil societies are resilient and respond quickly when the government fails to address a crisis. In Belarus, Russia, and Azerbaijan, civic activists are rushing into the gaps left by governments; moreover, they are breaking down traditional divides between human-rights groups and socially oriented civic initiatives, and propelling public support for civic engagement generally.

Filling in when government flounders

In Belarus, President Alyaksandr Lukashenka has stubbornly refused to acknowledge the public-health emergency posed by COVID-19. He remains intransigent even as the country leads its neighborhood in the number of confirmed cases—well ahead of much more populous Poland and Ukraine. Instead, the response to the pandemic has been largely driven by civil society.

For example, the spontaneous, activist-led effort ByCovid19, which supports medical workers, rapidly evolved into a nationwide volunteer movement. It now operates what is essentially the default crisis-response center for medics around the country, who call in with urgent requests. Volunteers mobilized dozens of businesses to support hospitals and schools. The group proved so effective that it is now collaborating with the UN Children’s Fund (UNICEF) and the Ministry of Health to streamline the delivery of medical and personal protective equipment into the country.

Civil society has also stepped up in Russia, where the country’s lawyers swiftly responded to heightened digital surveillance, charges of “fake news” distribution, intrusive travel restrictions, forced hospitalizations, labor disputes, and the mandatory deployment of medical students. Leading human rights groups Agora and OVD-Info have led efforts to track rights violations in the context of COVID-19, and mobilize lawyers; Agora fields nearly 100 hotline calls per day. Other initiatives like those in Belarus are providing medical equipment where the government has failed to deliver, while international and domestic businesses alike are providing free meals, rides, footwear and clothing, disinfectants, and personal hygiene supplies.

And in Azerbaijan—where the government launched its official crisis website three weeks after forming a COVID-19 task force—civic initiatives and independent media stepped up to inform citizens about the nature of the virus and the necessary precautions. At risk of persecution, activists persisted in raising questions about the country’s economic stimulus package, which introduced mandatory public and private sector contributions without explaining how funds would be disbursed to needy citizens. Volunteer groups like the Qaranquş Aid Fund coordinate deliveries of food and essentials to the elderly, who were banned from leaving their homes but left without government-provided social services.

Public support is on the rise

In addition to galvanizing civil society groups themselves, these and other responses to the COVID-19 pandemic have driven public support both for civic initiatives that address the direct effects of the crisis, and that deal with longstanding human rights issues exacerbated by it.

In Russia, sluggish support for improved protections against domestic violence intensified during the stay-at-home period, when official reports showed a marked increase in domestic violence cases. Alarm over the issue has united civic groups across Russia, which have actively pushed for regulatory changes and public-awareness campaigns. Such collaboration between so-called socially oriented groups and rights advocacy groups—the latter of which the government consistently undermines as agents of foreign influence—was previously uncommon. In an early result of their combined efforts, a special government commission has already obliged governors to urgently implement measures to prevent and investigate cases of domestic violence.

Stories of selfless volunteers mobilizing critical support to frontline workers are eliciting visceral, emotional response from citizens, and bolstering individual-fundraising culture in these authoritarian states. In Russia, dozens of fundraising campaigns are collecting donations to supply medical workers with protective equipment. Belarusians raised over $2.2 million in less a month through an official fundraiser alone; separately, MolaMola, an independent Belarusian crowdfunding platform, features over 40 citizen-led campaigns to support hospitals across the country. Even in Azerbaijan, where the culture of individual giving is still in its infancy, crisis-related civic fundraising in some cases quintupled original goals.

The costs of civic activism

This uplifting rise in civic activity does not come without costs. Under the guise of COVID-19 responses, governments have intensified restrictions on civil society. Azerbaijan’s government attacked independent voices as early as mid-March by banning the spread of “false” information, arresting scores of opposition activists, and detaining Facebook users under the new restrictions. In Belarus, activists fear that once officials realize just how vividly collective volunteer efforts contrast with government ministries’ impotence, they will be detained on bogus charges like tax evasion. Volunteers in Russia have been detained for delivering food to homeless people, under the pretext of violating public health orders.

In Belarus, Russia, and Azerbaijan, the weight of the crisis fell on civic groups already worn out by decades of government crackdowns. Yet they have responded effectively, in ways that have drawn disparate groups together, and which at times have prompted limited collaboration with government agencies. These visible responses to COVID-19 offer the promise of transcending the “government failure” model for more sustainable public-private partnerships, where civic groups become accepted as a fully capable and complementary part of society.

As joint responses to the crisis overcome artificial rifts between social-service and human-rights groups, public support for civic initiatives continues to grow. This brings hope that successful fundraising efforts will allow the public to better understand the critical value of even modest donations, motivating them to support future civic initiatives. Importantly, the rise in civic consciousness can help normalize volunteerism and other forms of active citizenship.

Government elites deny the crisis, offer paltry responses, and stifle the resulting criticism at their peril; their failures only make the critical contributions of civil society more visible. Thoughtful government leaders should recognize the momentum behind activist-led efforts, and use their positions to empower them and encourage state collaboration with them. The results promise an immense public good, amid the damaging and deadly COVID-19 pandemic and beyond.