Would a Nuclear Accord Change Much Inside North Korea?

North Korea scholar David Hawk answers questions about the implications of a nuclear accord for human rights conditions in the country. 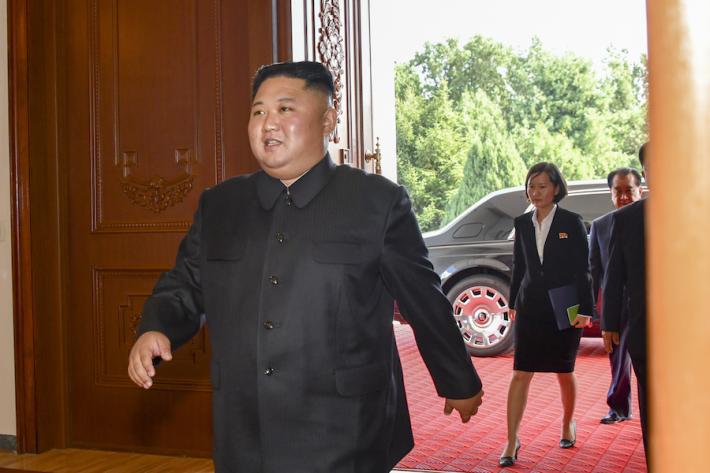 Kim Jong-un arrives for a working lunch in Pyongyang with US Secretary of State Michael Pompeo, October 2018. Image credit: US Department of State via Flickr

The regime is unlikely to allow even the limited personal freedoms of China or Vietnam, says expert David Hawk.

US president Donald Trump’s negotiations with North Korean leader Kim Jong-un have triggered discussion about how a potential agreement on nuclear weapons might affect the internal political and economic policies of the regime in Pyongyang.

In the interview below, Freedom House’s Arch Puddington poses questions about North Korea’s future to David Hawk, a scholar and former Freedom in the World analyst who has researched and authored a series of major reports on human rights conditions in the country, including four editions of The Hidden Gulag (2003, 2012, 2013, and 2015) and the 2017 report North Korea’s Parallel Gulag.

Is there anything in Kim Jong-un’s background, including his Swiss education, that would suggest a liberalizing departure from the totalitarian governance style established by his father and grandfather?

No. Kim’s time in Switzerland was essentially his middle school years. He picked up on what boys of his age typically would: Eric Clapton and basketball. (This was the era of the Chicago Bulls, hence his fascination with Michael Jordan and Dennis Rodman.) And perhaps skiing. All of Kim’s companion students would repair to the Alps for skiing every weekend. Perhaps that is why immediately upon taking power, he started to build a ski resort in North Korea.

The most relevant models for at least economic liberalization were and are China and Vietnam, not something learned in far-off Zurich or Bern.

Has there been any improvement in North Korea’s human rights conditions since Kim assumed the leadership?

Not in strict or precise human rights terms. But there has been a substantial improvement in living conditions for a large portion of the North Korean people. The new economic measures—such as (1) reducing the collective farm agricultural work units almost to the level of a family farm and allowing farmers to sell a much larger percentage of their crop in markets, and (2) allowing state enterprises to operate capitalist-style markets and profit-making businesses—have raised food production levels and generated business activity. So signs of new wealth are plainly visible in the cities: privately operated restaurants, many more cars, stores selling consumer goods, and the like.

As soon as he came to power, Kim Jong-un built playgrounds, skate parks, swimming pools, water parks, aquariums, and the aforementioned ski resort for the children of the elite and the growing middle class, who obtain their income from markets, not state or party employment.

It can also be said—and this is said by South Korean progressives—that there is now de facto access to foreign media. While it is technically illegal, many or most North Koreans have access to South Korean music, videos, films, and television dramas. The only North Koreans who are jailed for possession of these materials are those too poor to bribe the arresting police. Some have characterized the police bribes as the equivalent of “rental fees,” like the small sums that used to be charged by Blockbuster or other video-cassette rental companies before they were replaced by streaming services.

We can be glad that North Koreans have access to South Korean entertainment content, but in human rights terms this does not amount to an increase in media freedom or freedom of information.

Some commentators have pointed to the emergence of markets and private business activity as a positive change that might lead to broader liberalization in North Korean society. Could successful nuclear talks generate further development along these lines?

Further economic development? Sure. If the nuclear negotiations do not break down (they have yet to really get started), and if there are exemptions carved into the harsh post-2017 sanctions, then economic growth in North Korea can resume. If South Korean and Chinese firms can move back into North Korea, the economy will grow. If North Korea can resume coal, textile, and seafood exports to China, the economy will grow. And there are all sorts of ideas about productively merging North Korean mineral deposits and a very cheap but educated and disciplined labor force with South Korean investment, technology, and management experience. These enterprises would lift many more North Koreans out of dire poverty.

But broader liberalization? Probably not. One example: if foreign businesses set up production enterprises throughout North Korea, only a very small number of North Koreans would gain access to the internet, as needed for their work activities. Another example: if the United States meets Kim’s terms for “improved relations,” then perhaps North Korea will allow North-South family reunions through controlled video conferencing. That’s very important for the families in question, but it certainly won’t happen for the 33,000-plus North Koreans who have “defected” to South Korea since 2000, and it won’t change the human rights situation even for the North Korean participants.

In any case, Kim will take, first and off the top, a very big cut of all foreign investment and aid. And he will likely use those funds to purchase the latest Chinese surveillance technology to maintain strict control over the North Korean population.

North Korean officials have spoken positively about China and Vietnam. Setting aside for the moment that democracy has not advanced in either country, is there any real evidence that Kim is interested in following their road to economic modernization?

I’ve heard North Koreans make positive statements about Chinese, Vietnamese, or Singaporean prosperity. I’ve never heard high-level support for the Chinese “reform and opening” model or Vietnam’s “renovation.” In fact, I think that is exactly what North Korean authorities don’t want. North Korea has always objected to foreign models. Stalin and Mao each had their own “isms,” so North Korea came up with “Kimilsungism.” That reference to founding leader Kim Il-sung is still in common use, along with the stock phrase “in-our-style.” So it is “socialism in-our-style” and even “human rights in-our-style.”

At present, they carefully avoid mention of the Korean word for “reform.” In the future, we may hear some variation of “reform in-our-style.” But what they will mean by this is “reform without opening.” Chinese “reform and opening” and Vietnamese “renovation” certainly did not include democracy, but they did greatly expand the ability of Chinese and Vietnamese people to obtain passports and travel at home and abroad for education, business opportunities, or simple tourism. Chinese and Vietnamese people can write emails or letters and make phone calls to communicate with folks abroad. China is big enough to have its own Google and Facebook, and Vietnamese users are active on the actual Google and Facebook in large numbers. (In both countries, of course, those who promote democracy or criticize the regime are subject to imprisonment.)

Both Koreas now want to restart the “Kaesong Industrial Complex” where these South Korean factories were located, if and when UN sanctions against North Korea are lifted or exempted. And both Koreas will press for such manufacturers (despite their lack of compliance with International Labour Organization standards) to have access to US markets, as part of the “new US-DPRK relationship” described in the Trump-Kim agreement in Singapore.

You’ve done pathbreaking research into the North Korean gulag under Kim Jong-il, the current leader’s father. What is the state of repression under Kim Jong-un?

The state of repression is basically unchanged. Civil and political rights continue to be violated, wholesale and retail, as it were. “Marketization from below” is no longer thwarted as it was under Kim Jong-il, so there is a rise in the standard of living for many. But that is not quite the same as saying there are improvements in economic and social rights. And it doesn’t mean that resources are being redirected from the military to civilian needs, such as improving the public health system in the countryside. Funds obtained from investment or foreign trade are used to import defense-related materials and luxury goods for the elites, not food supplies for the malnourished.

The “regular prison system,” meaning the kyo-hwa-so prison camps and penitentiaries and their feeder detention facilities, continues as before. This repression system is not extrajudicial in that it is nominally covered by the criminal code. But that criminal code features, along with the usual crimes of murder, robbery, prostitution, and the like, many offenses that are essentially political in nature. These facilities detain both criminal prisoners and large numbers of what are by international standards political prisoners. (See my 2017 report for the Committee for Human Rights in North Korea (HRNK), The Parallel Gulag: North Korea’s “An-jeon-bu” Prison Camps, which features satellite photos of these facilities and enumerates the long list of political offenses within the North Korean criminal code.)

With regard to the extrajudicial kwan-li-so prison camps, whose existence the regime denies, two phenomena are worthy of note. First, most of our information about those prison camps came from the two facilities (Camp 15 and Camp 18) from which a very small number of prisoners were released, some of whom then fled to China and finally to South Korea. There have been no known releases since 2007, so all we have now are satellite photographs. The second phenomenon is that even back during Kim Jong-il’s rule, the regime curtailed the system of “collective guilt” that Kim Il-sung had instituted to imprison the extended family members of persons suspected of being dissidents. (It had been this family imprisonment system that filled up the camps in the 1950s, 60s, and 70s.) The result was that the intake of new prisoners declined. It is my belief, though I have no hard evidence, that the deaths of older prisoners now exceed arrivals of new prisoners. This is the most likely explanation for the closure of one or two of the formerly enormous camps, with the small number of remaining prisoners transferred to other camps.

My guess is that Kim Jong-un is going to let this process continue for another decade or two, at which point it will then not be inaccurate to say that “political prison camps do not exist.” I would speculate further that the authorities think they will be able to maintain control over the population through the “parallel gulag” within the regular prison system.

Does Kim in fact have a vision or a plan for his own unique route to a system that combines political repression with economic growth and enhanced prosperity?

Yes, I think Kim has both a vision and a plan. It is to use his nuclear weapons and delivery systems for deterrence and coercive diplomacy—that is, trading arms control (not expanding the size of his nuclear arsenal and the quality of his long-range ballistic missiles) for political concessions and recognition, formal or de facto sanctions relief, and trade, aid, and investment. He can then grow the economy while maintaining the present social and political system.

In South Korea there are viewpoints that Kim can be nudged toward a social and political opening, even if at first it is very limited. Sometimes this is described as a transition from “absolute totalitarianism” to “developmental dictatorship,” which, in theory, would allow for a little more civil society to gradually emerge. The alternative viewpoint is that no matter what the United States might do or not do, a prosperous, free, democratic, and culturally vibrant South Korea will always be a threat to the North Korean regime, and this threat will likely deter Kim from ever loosening his control over North Korean society.