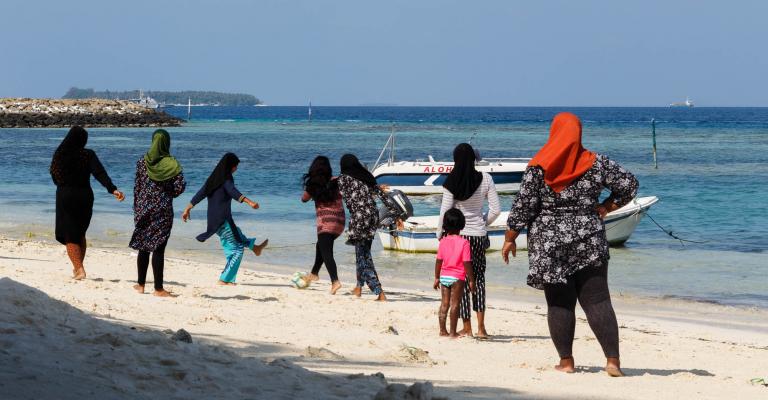 The Maldives’ political rights rating declined from 4 to 5 due to the systematic repression of the opposition and the emergence of a massive corruption case involving the improper lease and sale of islands and lagoons, in which senior officials have been implicated.

Following several decades of rule by former President Maumoon Abdul Gayoom, the Maldives held its first multiparty presidential election in 2008. However, democratic gains have been reversed in recent years amid a severe crackdown on the opposition and the introduction of laws restricting speech and assembly. Widespread financial and judicial corruption has further eroded public confidence in the government.

The administration of President Abdulla Yameen continued to suppress the political opposition through the enactment and enforcement of harsh restrictions on free speech and assembly, and through the manipulation of political processes including election timelines and the registration of opposition party members.

In May 2016, former president Nasheed—whose 2015 arrest, flawed trial, and conviction on terrorism-related charges sent shockwaves through the political landscape—was granted asylum by the United Kingdom, where he had been permitted to travel to receive medical treatment. In June, Nasheed announced the establishment of a new opposition body, the Maldives United Opposition (MUO), which took the form of a shadow cabinet and whose stated aim was to remove Yameen through lawful mechanisms and restore democratic rule. Nasheed took an advisory role in the body.

Maldivian authorities promptly declared the MUO illegal and its rallies in the Maldives were dispersed by police, some of whom reportedly removed their nametags as they moved against the demonstrators. MUO spokesperson Ahmed Mahloof, who is also a member of parliament, was arrested in July while promoting a MUO rally; he remained in jail at year’s end after being convicted of police obstruction and handed two sentences totaling nearly 11 months. Additionally, in October MUO deputy leader Ali Waheed, who is also chairperson of the opposition Maldivian Democratic Party (MDP) and who lived in exile in the United Kingdom, was charged with terrorism, reportedly in connection with his participation in a 2015 mass protest during which participants called for the release of detained opposition figures, and had seen clashes between participants and police. Separately, the leader of the Islamist Adhaalath Party, Imran Abdulla, in February was convicted of terrorism-related charges involving his participation in the same protest, and he received a sentence of 12 years.

The courts and Election Commission (EC) also announced decisions that benefitted the ruling Progressive Party of Maldives (PPM) during the year. In November, the EC deregistered almost half of all MDP members, citing their failure to adhere to a law requiring them to submit their fingerprints to it. In December, a civil court ruled that the EC must postpone local council elections set for January 2017 because the ruling party, embroiled in a leadership dispute, was not sufficiently prepared for them.

Meanwhile, the biggest corruption scandal in the country’s history came to light in 2016, when senior officials were implicated in the embezzlement of more than 1.2 billion rufiyaa (US$79 million) from the state-owned Maldives Marketing and Public Relations Corporation (MMPRC); the scandal involved the improper lease and sale of islands and lagoons. Former vice president Ahmed Adeeb and two others were convicted on corruption charges in relation to the scandal and issued jail sentences ranging between two and eight years. Whistleblower Gasim Abdul Kareem, who helped expose the corruption and was consequently convicted in a closed trial of data theft and illegal disclosure of information, was in released in November, with authorities ruling that he had served his eight-month sentence while in pretrial detention.

In August, the parliament approved and Yameen ratified new legislation criminalizing and raising fines for defamation to up to 2 million rufiyaa (US$130,000). Those who fail to pay the fines can be jailed for up to six months. Several media outlets were forced to close during the year following decisions by the courts or by regulators, prompting alarm among press freedom advocates. Also in August, the parliament approved and Yameen ratified a new law mandating that organizers of protests, marches, and other gatherings either obtain prior written permission from the police for the event, or be held only in special areas designated by the Ministry of Home Affairs.

In October, the Maldives quit the Commonwealth after facing scrutiny from the body over its failure to implement judicial and other reforms, reflecting a worrying disengagement from the international community.