Skip to main content
Accessibility
Freedom in the World 2018
Last Year's Score & Status
11 100 Not Free
Global freedom statuses are calculated on a weighted scale. See the methodology.
* Indicates a territory as opposed to an independent country. 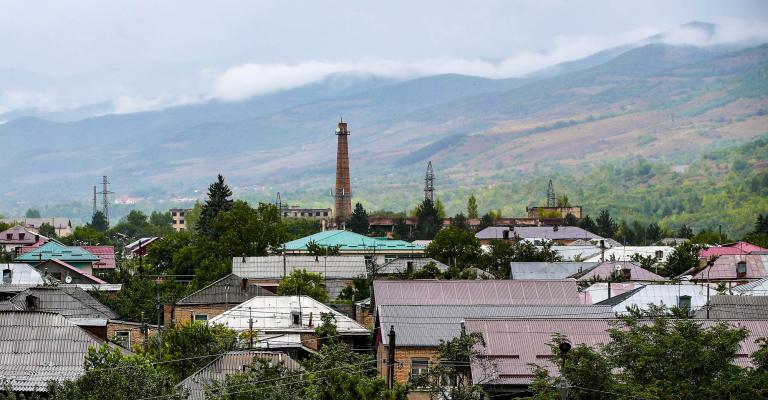 Large parts of South Ossetia, a breakaway territory of Georgia, enjoyed de facto independence after a civil conflict ended in 1992. A 2008 war that drew in Russian forces resulted in the expulsion of the remaining Georgian government presence and of many ethnic Georgian civilians. Only Russia and a handful of other states have since recognized South Ossetia’s independence. The territory remains almost entirely dependent on Russia, and Moscow exerts a decisive influence over its politics and governance. Local media and civil society are largely controlled or monitored by the authorities, and the judiciary is subject to political influence and manipulation.

Although South Ossetia holds elections regularly, they are severely restricted at all stages of the process, and are not monitored by independent observers or recognized by the international community. In the most recent presidential election, in April 2017, former military leader Anatoly Bibilov was elected to a five-year term with 58 percent of the vote; he defeated the incumbent, Leonid Tibilov, who took 30 percent, and KGB official Alan Gagloyev, who took 11 percent.

Political analysts said that the conduct of the 2017 election was an improvement on the 2011 poll, the results of which had been disputed. Nevertheless, political debate and competition only occurred within a narrow field of candidates allowed by Russia and pro-Russian authorities. Moscow’s open backing of Tibilov and significant political influence over the territory’s politics generally calls into question the ability local authorities to hold a free and fair presidential election.

Parliamentary elections held in 2014 were an improvement from previous ones. Unlike in 2009, in which only three parties were able to participate, candidates from nine parties succeeded in registering in 2014. The opposition United Ossetia, led by Bibilov, won 20 seats, followed by the Unity of the People party with 6 seats. Smaller parties captured four seats. However, South Ossetia’s legislative elections are not internationally recognized, and the extent of Russian influence in the territory’s politics precludes truly competitive legislative elections.

In April 2017, President Bibilov declared that the 2019 legislative elections would be conducted by a mixed proportional and majoritarian system, instead of the fully proportional system that is currently in place. The decision was made without public input.

In a referendum held alongside the 2017 presidential election, over 80 percent of voters approved adding “The State of Alania” to the territory’s name. The move was viewed as a precursor to potential constitutional changes to allow union with North Ossetia–Alania, which is a federal subject of Russia.

According to electoral laws, candidates must have permanently resided in South Ossetia for 10 years. Former president Eduard Kokoity, the only candidate who openly opposed annexation by Russia, was barred from running due to his failure to meet the residency requirement. The Supreme Court rejected Kokoity’s appeal, in which he claimed that the evidence put forth by the Central Election Commission (CEC) was falsified.

Moscow exerts a decisive influence over politics and governance, in effect placing significant restrictions on the ability of political parties outside of a narrow political spectrum to operate freely. However, a number of new political parties have been able to register in recent years. These include Bibilov’s United Ossetia, which won the most seats in the 2014 elections. As of 2017, over a dozen political parties existed, though only four were represented in parliament. In October, the Ministry of Justice began a process to disband inactive or barely active political parties, in a move opposition activists considered politically motivated.

In the 2017 presidential election, opposition candidate Anatoly Bibilov challenged and defeated the incumbent president. However, the success or failure of the territory’s opposition politicians is largely determined by Moscow. South Ossetian government sources implied that banned presidential candidate Kokoity was not in Moscow’s favor.

The functioning of South Ossetia’s institutions are almost entirely dependent on economic and political support from Moscow. There are few avenues for people to meaningfully participate in political processes if they wish to advocate for interests that fall outside of the narrow political spectrum defined by Russia and the territory’s Russian-aligned authorities.

The interests of women and minority groups are not represented politically. Most ethnic Georgian residents have either declined or have been denied the ability to participate in elections.

The ability of elected officials to determine and implement policy is heavily influenced by the Russian government. A sweeping 2015 treaty on alliance and integration between Russia and South Ossetia closely integrates the territory’s defense, security, and customs mechanisms with those of Russia, charging Moscow with protection of South Ossetia’s borders; it is binding for 25 years with the possibility of extension. Russian aid comprises almost the entirety of South Ossetia’s budget.

According to leaked private emails from a Russian businessman in 2016, Moscow mandated 13 working groups to review legislation drafted by the authorities in Tskhinvali, South Ossetia’s de facto capital, and had a timetable for the bills’ approval by the territory’s legislature. Some of Bibilov’s ministerial appointments reflect a long trend in the territory to nominate Russian citizens to key roles, including the territory’s security services.

Like his predecessor, President Bibilov has spoken repeatedly of formally uniting the territory with Russia’s North Ossetia–Alania, or joining the Russian Federation as a separate region.

Official corruption is widespread in South Ossetia, and there is little to no systematic attempt to fight it.

Due in part to the significant level of Russian influence on domestic politics and decision-making, South Ossetia’s government does not operate with transparency. Officials have not identified a lack of transparency as a policy priority.

Is the government or occupying power deliberately changing the ethnic composition of a country or territory so as to destroy a culture or tip the political balance in favor of another group? –2 / 0

During the 2008 war, Ossetian forces seized or razed property in previously Georgian-controlled villages, and large numbers of ethnic Georgians fled the fighting. Authorities in South Ossetia have since barred ethnic Georgians from returning to the territory unless they renounce their Georgian citizenship and accept Russian passports. Of approximately 20,000 ethnic Georgians displaced from their homes in South Ossetia, most have not been able to return. However, conditions for local residents have largely stabilized since the war, particularly due to the absence of open conflict across the administrative line separating the territory from Georgia.

Local media are almost entirely controlled by the authorities. Self-censorship is pervasive, and defamation charges are used against critical media. South Ossetia’s state broadcasters are subject to frequent blackouts and technical interruptions. An increasing number of residents rely on online outlets for news and other information, and foreign media, including broadcasts from Russia and Georgia, remain accessible.

Journalist and activist Tamara Mearakishvili was questioned on several occasions in 2017, during which investigators expressed interest in the nature of her work with international media outlets. In August, police searched her home. The same month, criminal slander charges case were brought against her as a result of an interview she gave to Radio Free Europe/Radio Liberty (RFE/RL) about alleged corruption among local officials In December, a court rejected Mearakishvili’s appeal.

In October 2017, South Ossetia’s de facto Supreme Court outlawed Jehovah’s Witnesses as an “extremist” organization; the group had been banned in Russia in April.

Score Change: The score declined from 2 to 1 due a court ruling that categorizes Jehovah’s Witnesses as an extremist organization, effectively banning the group.

The government exerts strong influence over the education system. In 2017, the ministry of education began to phase out Georgian-medium education, starting with the first to fourth grades, with an additional grade to transfer to Russian-language education each subsequent year. In explaining the move, state officials cited the need to integrate the Georgian community, the lack of locally produced Georgian-language materials, and the advantage of Russian-language skills in pursuing higher education.

Private discussion is constrained by the sensitivity of certain topics, particularly the territory’s geopolitical standing. Speaking of the property rights and expulsion of the Georgian population is assumed to attract unwanted attention.

Since the 2008 war, residents have demonstrated against corruption and the sluggish pace of postwar reconstruction, but freedom of assembly is limited. Small groups of supporters of banned candidate Kokoity held protests in Tskhinvali before and during the 2017 election. Authorities deemed a group picketing government buildings in March as an unsanctioned gathering and brought cases against 23 protesters, though Bibilov closed the cases in June.

Although some nongovernmental organizations (NGOs) operate in the territory, most are subject to government influence and are financially backed by Russia. Legislative amendments in 2014 increased the oversight capacity of local authorities over NGO activity and subjected organizations with foreign funding to broader and more frequent reporting requirements.

Trade unions in South Ossetia largely defer to the policies of the separatist government. Conflict with Georgia has left trade unions weak and geographically divided.

South Ossetia’s judiciary is not independent. The justice system has been manipulated to punish perceived opponents of the separatist leadership.

Government allies reportedly continue to violate the law with relative impunity. Russian prosecutors have attempted to curb malfeasance by local officials, but the Russian court system itself remains deeply flawed. Justice structures are undermined by a lack of qualified lawyers.

Victims of human rights violations committed during the 2008 conflict have few avenues for legal recourse.

Physical abuse and poor conditions are reportedly common in prisons and detention centers. In July, all inmates at a Tskhinvali prison declared a hunger strike, complaining that their rights, including access to medical treatment and to receive visitors, were not being respected.

Freedom of movement in and out of South Ossetia from Georgian-government controlled territory is restricted, though travel to Russia remains largely unimpeded. The South Ossetian security services closed the border with Georgia entirely on several occasions in 2017, and arbitrary arrest and detention of Georgian citizens along the border continued throughout 2017. Since 2015, Russian servicemen have slowly moved South Ossetia’s administrative border into Georgian territory.

The territory’s political and military situation has negatively affected protections for property rights, particularly for residents close to the administrative border. The separatist authorities have consistently refused to countenance the return of ethnic Georgians expelled from their homes before or during the 2008 war.

While no laws officially regulate individuals’ public appearance, statements by public officials reflect the conservative nature of the society. No laws or government programs specifically protect victims of domestic violence.

There is very little economic opportunity in South Ossetia. Populations living along the administrative border with Georgia face additional economic uncertainty due to divisions created by shifting and uncertain borders.