In this issue: How internet freedom in China and Taiwan are worlds apart. Chinese regulator releases new guidelines to ensure the “Chinese Communist Party rules the internet.” Meanwhile, a law on doxing in Hong Kong passed, paving the way for greater internet restrictions, and a major newspaper in India was hit by a cyberattack linked to Chinese state actors.

Actress Zhao Wei (Vicky Zhao) was scrubbed from the Chinese internet beginning August 26. This image, from Chinese search engine Baidu, removes Zhao’s photo and name from the film credits of My Fair Princess, in which she starred. Her name was unsearchable on video-streaming platforms and removed from cast lists, and in some cases entire films and television shows she appeared in were removed from Chinese platforms. Internet companies confirmed that they had received requests to censor her. Zhao’s deletion from the Chinese internet sparked angry online discussion, with one post questioning the development receiving 23,000 likes. While her Weibo account, with 85.6 million followers, remains accessible, the reason for her erasure elsewhere is unknown. (Image Credit: Frankie Huang)

Analysis: On Internet Freedom, China and Taiwan Are Worlds Apart

One is ranked as the most oppressive digital environment. The other is among the freest.

By Sarah Cook and Allie Funk

Only 110 miles of water separate mainland China and the island of Taiwan. But when it comes to governance and human rights—and especially internet freedom—the two neighbors might as well be on different planets.

Freedom House’s Freedom on the Net 2021 report—which included an assessment of Taiwan for the first time—lays out the differences in stark relief. China’s government, ruling over a massive population of 989 million internet users, was ranked as the world’s worst abuser of internet freedom for the seventh consecutive year, earning the country a meager score of 10 on the index’s 100-point internet freedom scale. By contrast, Taiwan emerged as the fifth freest online environment among the 70 countries assessed. It received a score of 80 on the same scale and surpassed many older democracies, including the United States. 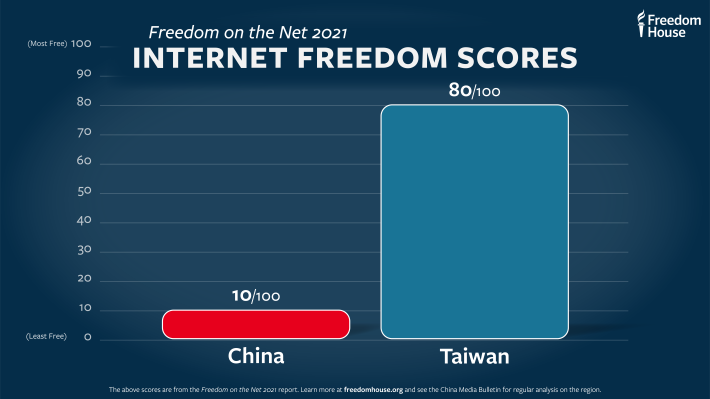 The 70-point gap between China and Taiwan reflects the alternate online universes in which their respective netizens operate.

In China, for example, authorities over the past year censored calls for an independent investigation into the origins of the COVID-19 pandemic and complaints about Chinese-produced vaccines. Ordinary users faced severe legal repercussions—including extrajudicial detention, torture, and prison terms of over 10 years—for activities like criticizing Communist Party leader Xi Jinping, speaking openly about their religious beliefs, or communicating with family members and others overseas.

In Taiwan, by comparison, netizens and journalists regularly critique the actions and policies of President Tsai Ing-wen, including the government’s handling of the pandemic amid a vaccine shortage, without fear of reprisal. Activists use platforms and apps like Facebook, YouTube, and Signal—which are blocked in China—to share news about local political and social issues while also voicing support for persecuted Hong Kongers, Uighurs, Tibetans, or Falun Gong practitioners in China.

Freedom on the Net 2021 documented the ways in which authorities in both China and Taiwan have moved to step up regulation of the booming tech sector, despite taking radically different approaches.

The Chinese government and its powerful regulator—the Cyberspace Administration of China—have been among the most aggressive state actors worldwide in tightening control over technology firms, employing new investigations and laws meant to address anticompetitive behavior and data abuse. For example, the Personal Information Protection Law adopted in August is the country’s first comprehensive attempt at limiting how companies collect, store, and use personal data; the law failed to address, however, how pervasive state surveillance itself systematically undermines data protection.

This year also brought new criminal penalties that reduce the space for unregulated speech in the country. New restrictions on online self-publishing that took effect in January, for instance, require administrators of independently operated social media accounts to obtain a permit and refrain from commenting on a list of restricted topics. These and other censorship mechanisms in China are arbitrary, opaque, and inconsistently applied due to the weak rule of law provided by the authoritarian political system. Under legal changes that came into effect in March, those who defame national “heroes and martyrs” face up to three years’ imprisonment; detentions under the new legislation are already occurring. 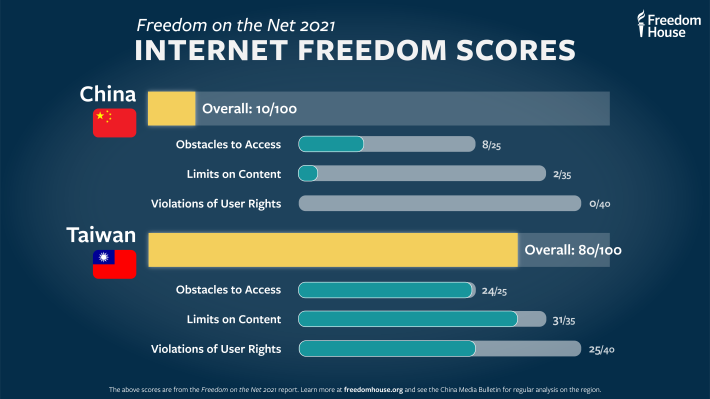 In Taiwan, the government has kept to a more democratic path in regulating tech companies. The Telecommunications Management Act, which went into effect in July 2020, relaxed previous requirements for internet service providers to register and obtain a specific amount of capital in order to operate in the country—changes that could contribute to a more diversified telecommunications market.

Other regulatory efforts in Taiwan have aimed to limit the impact of and enhance resilience against the onslaught of disinformation emanating from Beijing in a way that does not infringe on free expression, access to information, and other human rights. The draft Internet Audiovisual Service Management Act (IASMA) would enhance the transparency of streaming platforms’ operations by requiring that certain companies report revenue and user statistics, provide users with an easy-to-use complaint mechanism about offending content, and ensure that companies’ terms of service clarify how data are collected and used.

Thus far, Taiwanese regulators have avoided blocking digital platforms and instituting other forms of technical censorship—a welcome distinction from the Chinese regime’s systematic filtering of disfavored websites. However, the IASMA requires companies to ensure that hosted content does not endanger national security, public order, or the moral good, or impair the emotional or physical well-being of youth. Regulators should ensure that these categories of speech are narrowly and proportionately defined so that companies are not encouraged to err on the side of censorship and remove protected political, social, and religious speech in their efforts to comply with the law.

Notwithstanding the vast gap in performance, there are exceptions to both China’s dismal repression of internet freedom and Taiwan’s strong protections. In China, the government and tech sector have delivered widespread and expanding access to internet communications and technologies, including the development and rollout of fifth-generation (5G) mobile networks. And Chinese investigative journalists, activists, bloggers, and ordinary internet users deserve credit for continuing to demand accountability for government abuses, criticizing the authorities’ response to the pandemic, and sharing information about other sensitive topics, all despite a growing risk of criminal penalties.

In Taiwan, certain laws dole out disproportionate punishments for defamation and spreading false information, and internet users have been investigated, prosecuted, and fined for their online speech. Criminal penalties for disinformation and defamation are prone to arbitrary application and abuse by prosecutors and law enforcement agencies, and charges can do damage even if they are eventually thrown out by an independent judiciary. Last September, for example, a music teacher was investigated for a Facebook post claiming that lunch provided at a government cabinet meeting was extravagant and an abuse of public funds, though a court later dismissed the case. Separately, while the country’s surveillance laws and procedures are a far cry from the pervasive and comprehensive monitoring system that exists in China, they have nevertheless undermined privacy rights in practice. The draft Technology Investigation Act, proposed in September 2020, would enhance the government’s ability to access private communications stored on people’s electronic devices.

The vast difference between internet freedom conditions in China and those in Taiwan has profound implications not only for human rights, but also for international security and democratic values. The distorted online environment created by the Chinese regime, which also affects Taiwan through disinformation and political polarization, has fueled mistrust within each society and across the Taiwan Strait. Indeed, one of the most encouraging incidents of the past year was the brief glimmer of open communication and mutual understanding exhibited between Chinese and Taiwanese users that was facilitated by the Clubhouse live audio app in February, before it was abruptly blocked by government regulators and app stores in China.

The sophistication and aggression of Beijing’s information campaign against Taiwan should not be underestimated, nor should its potential to influence political and electoral outcomes. Although public-private partnerships have been relatively successful in fending off such attacks to date, especially surrounding the January 2020 general elections in Taiwan, the China-linked actors driving disinformation and political interference efforts are constantly innovating and exploring new tactics to more effectively influence Taiwanese voters of all ages.

Meanwhile, the demolition of media and internet freedom in Hong Kong since Beijing’s forced imposition of the National Security Law there last year demonstrates just how quickly the Communist Party regime can turn a previously vibrant information landscape into an authoritarian shadow of its former self, if given the chance.

There are many reasons for the United States, other democratic governments, and major technology firms to support and protect internet freedom in Taiwan. Doing so would obviously benefit the local population, but the latest Freedom on the Net findings highlight how important the country is to the broader cause of global internet freedom, in which all societies share an interest. Democratic forces in Taiwan are exploring innovative and principled solutions to the challenge presented by Beijing’s expanding digital influence. The island also serves as a unique beacon of hope, possibility, and demonstrated success for the many millions of Chinese netizens who yearn for greater free expression, privacy, and other fundamental rights in their own country.

Sarah Cook is the research director for China, Hong Kong, and Taiwan at Freedom House. Allie Funk, one of the authors of Freedom on the Net 2021, is Freedom House’s senior research analyst for technology and democracy. This article was also published in The Diplomat on October 12, 2021.

On September 13, the London-based Uyghur Tribunal held its last day of hearings. The body heard testimony from a total of 53 witnesses during two sessions in June and September, and received over 300 written statements. It was set up as an independent people’s tribunal through a crowdfunding campaign that raised £250,000 ($340,000) to investigate the Chinese government’s treatment of Uyghurs amid a widespread failure of states to do so. Geoffrey Nice, a former prosecutor with the International Criminal Tribunal for the Former Yugoslavia (ICTY), chaired the nine-member jury panel, which will release its final ruling in December.

Witnesses included victims of China’s internment camps, family members, experts, and at least one former Chinese police officer. The tribunal provided an avenue for Uyghurs and other Turkic Muslims to testify in a semijudicial setting about the abuses they suffered, and to raise awareness of the human rights violations in Xinjiang. The evidence collected will contribute to the legal historic record of the CCP’s human rights violations, and could be used in future prosecutions.

The Uyghur Tribunal also serves as an avenue to counter CCP propaganda. Its website is available in Mandarin Chinese, Uyghur, Arabic, and Russian, and it has received widespread international media coverage. Such was the perceived threat posed by the tribunal’s amplifying of the voices of Uyghur victims that Chinese authorities imposed sanctions on Nice, harassed and launched cyberattacks against witnesses, pressured the venue hosting the tribunal, and hosted a press conference in which the family members of witnesses denounced the hearing, apparently having been coerced to do so. 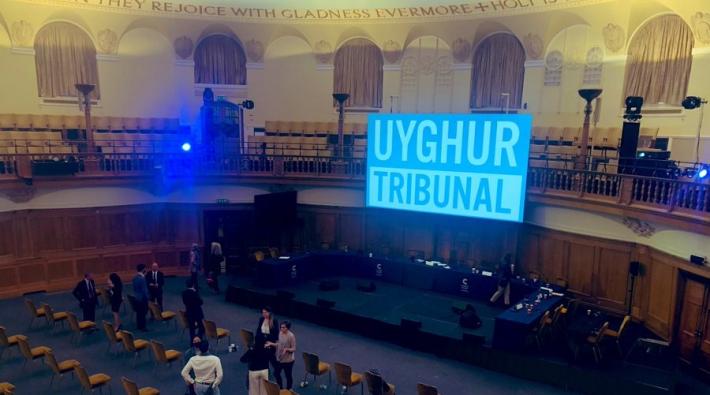