Beijing is a trend setter on a number of issues, but this one is nothing to be proud of. 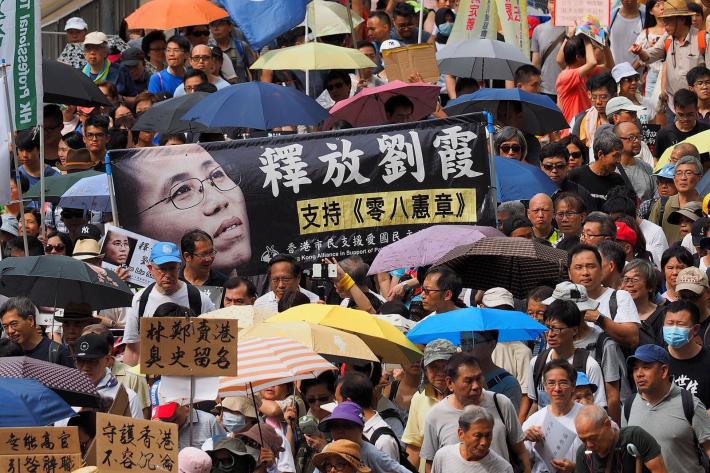 Beijing is a trend setter on a number of issues, but this one is nothing to be proud of.

According to Xi Jinping, China is ready for global leadership.

In a major speech last October, the Communist Party leader declared that “China champions the development of a community with a shared future for mankind.” He pointed to “a further rise in China’s international influence, ability to inspire, and power to shape.” He pledged that China “will uphold justice while pursuing shared interests,” asserted that China “will pursue open, innovative, and inclusive development that benefits everyone,” and promised that China will “boost cross-cultural exchanges characterized by harmony within diversity, inclusiveness, and mutual learning.” Under his leadership, he said, China will “cultivate ecosystems based on respect for nature and green development” while continuing “its efforts to safeguard world peace, contribute to global development, and uphold international order.”

Faced with this veritable avalanche of saccharine reassurances, one can’t help but feel that Xi is trying to hide something—something other than China’s boundless ambitions as a rising power, that is.

We know, for example, that he has condemned “Western” values including the rule of law, press freedom, and constitutionalism, even if he has no scruples about borrowing from a “Western” vocabulary when it comes to his vague promises of “inclusiveness,” “green development,” and the like.

We also know that pollution in China is among the world’s worst, that inequality is a defining feature of Chinese development, that the authorities treat the cultures of Uighurs, Tibetans, and other minority groups with utter contempt, and that the regime has flagrantly violated the rules of international order to grab territory in the South China Sea.

Xi claims that China has “encouraged the evolution of the global governance system,” but given Beijing’s record, this can only mean the demolition of democratic standards, universal human rights norms, and the principle of free expression on the internet.

If there is one thing that the Chinese government would most like us to overlook, however, it is the ferocious suppression of political dissent.

The global ranks of political prisoners dwindled substantially after the end of the Cold War and the collapse of tyrannical regimes almost everywhere. More recently, political prosecutions have ballooned again in countries like Turkey, Venezuela, and Azerbaijan.

China, however, is in a class by itself. Since the bloody 1989 crackdown on prodemocracy protests in Tiananmen Square, the Communist Party leadership has consistently jailed political dissidents, especially those who argued publicly for democratic change. And under Xi Jinping, the regime has rapidly expanded the scope of its repression, engulfing a numbing procession of lawyers, journalists, bloggers, women’s advocates, minority rights campaigners, and religious believers who have been detained, placed under house arrest, disappeared, or formally sentenced to prison.

In a reversal of the normal expectation that increased prosperity would nudge a society toward greater political freedom, modernization and wealth in China have been accompanied by more arrests and longer prison terms.

Names that should not be forgotten

The country’s most prominent political prisoner was Liu Xiaobo, the Nobel Peace Prize winner who died a year ago after serving eight years in prison, essentially for thinking and writing in ways that challenged the Communist Party leadership.

Recently, a group of Liu’s supporters announced the recipient of the Liu Xiaobo Conscience Award, an honor given to commemorate his example and to remind the world of the plight of those who have followed in his footsteps as a champion of democracy.

There were nine finalists for the prize, all current or recent political prisoners. The winner is Qin Yongmin, a human rights activist who, earlier this month, was given a 13-year prison sentence by a court in Wuhan. Prior to his sentencing, he endured an enforced disappearance, two years of pretrial detention, the persecution of his wife, and a total denial of due process rights. His lawyer withdrew from the case to avoid being punished by the authorities himself, a practice that has proliferated under Xi’s leadership.

The cases of other award finalists are depressingly similar.

Leader of the pack

It’s worth noting that, in its attitude toward political dissent, the Chinese Communist Party has proven much harsher than the old Soviet regime of the Brezhnev era. Modern Chinese sentences are longer, the prospects for early release are far worse, and the Chinese authorities are generally unmoved by pleas for leniency from foreign diplomats.

When Xi Jinping laid out his plan for his country’s role as a global leader, he was careful to frame his ambitions as goals to be achieved some years down the road. He needn’t be so modest where political repression is concerned. Among major world powers, China is already number one.