COVID-19 is Poised to Deepen Racial Disenfranchisement in November

The pandemic is the latest affront to Black voters’ ability to participate in US elections. Inaction is unacceptable. 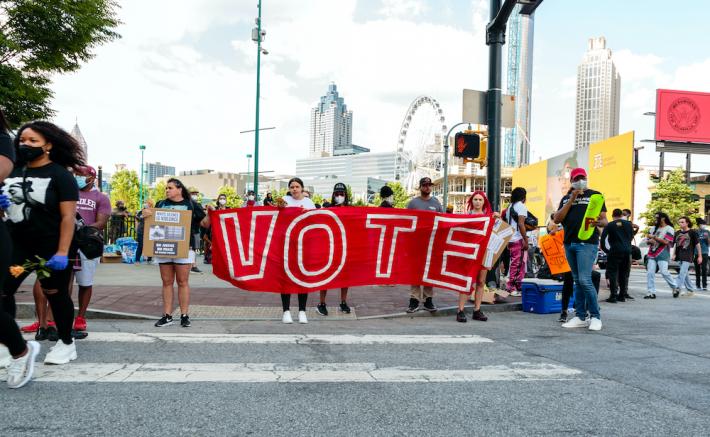 Racism is embedded in the American electoral system. From the not-so-distant days of poll taxes and literacy tests, through the rash of voter suppression efforts that followed the Supreme Court’s 2013 decision to strike down parts of the 1965 Voting Rights Act, this pattern of racial bias has centered on the disenfranchisement of Black voters.

Now, as the United States lurches through its primary season and toward a general election in the middle of a lethal coronavirus pandemic, there is a real danger that existing voting inequalities will be amplified by the public health crisis, just as it has compounded divides in healthcare and  the economy. The COVID-19 mortality rate among Black people is three times higher than among the White population, and Black Americans are also living with greater economic insecurity as a result of the pandemic. Black voters face a litany of obstacles to voting, some of which could be made even worse by the current crisis. Reduced polling places, long lines, and dysfunction surrounding absentee ballots—all of which were problems in Georgia’s recent primary elections—existed before the pandemic but are uniquely exacerbated by it. Without a COVID-19 response that specifically addresses racial disenfranchisement, Black voters could face a devastating increase in obstacles to their participation in elections.

In-person voting is by far the most common way to cast a ballot, but it was under pressure long before the coronavirus struck. The Supreme Court’s Shelby County v. Holder decision in 2013 invalidated a provision of the Voting Rights Act that had required states and localities with a record of racist disenfranchisement to obtain “preclearance” from the US Department of Justice or federal judges in Washington for any changes to their electoral processes. Since that requirement was lifted, states where voting procedures were previously subject to oversight have closed well over a thousand polling places, many of which were in predominantly Black counties.

COVID-19 represents an additional threat on this front. In March, the Ohio secretary of state called for additional volunteers to serve as poll workers during the primary, warning that experienced poll workers, who tend to be older, could stay home for health reasons and reduce the capacity of polling places. The disproportionately high prevalence of COVID-19 in many Black and Latinx communities means that the electoral precincts serving them could be more severely affected than others.

The number of polling sites in the city of Milwaukee was cut from 180 to 5, apparently due to a lack of poll workers, during Wisconsin’s April primaries. Chaotic changes were also reported in Georgia this month. According to NPR, “in the weeks leading up to the election, more than 10 percent of Georgia’s polling places have relocated because of COVID-19 concerns. In metro Atlanta more than 80 polling places were closed and consolidated ahead of Election Day.” Before Shelby County v. Holder, the changes in Milwaukee and Atlanta, both cities with large populations of Black voters in states with a history of racist voting rules, would have required federal preclearance.

Financial resources should quickly be allocated to prevent further decreases in access to in-person voting. In addition to maintaining or increasing the number of polling sites, electoral officials could use such funds to allow early voting and expand voting hours on election day. These steps—both of which take time to prepare—will not just help prevent further disenfranchisement. They will also have the benefit of reducing the health risks associated with high-density voting.

Waiting in line to cast a ballot is more than an inconvenience; it disenfranchises would-be voters, and as with other such obstacles, it has a long association with racial disparities. There was anecdotal evidence of long wait times in largely Black communities in Georgia’s recent primaries, and minimal lines in mostly White areas. Voters in Georgia had the longest wait times nationwide in the 2018 elections, and experienced the largest increase in wait times as compared with 2014. A study from the Bipartisan Policy Center and the Massachusetts Institute of Technology identifies race as the strongest demographic indicator of wait times. Similarly, the Brennan Center for Justice found that Black and Latinx voters waited more than 40 percent longer than white voters nationwide during the 2018 midterms.

If electoral officials’ adaptations to COVID-19 fail to consider these inequities, the upcoming elections could have the effect of compounding them. Health-related closures of polling places can push remaining locations beyond their intended capacity, and even without increased voter traffic, social distancing and cleaning efforts add to the time it takes for each voter to cast a ballot. While officials could boost capacity through the recruitment of new volunteers, inadequate or accelerated training may lead to more confusion and delays.

Fortunately, the same measures called for to increase access to polling places—supporting as many sites as possible, expanding voting hours, and enabling early voting—will also reduce wait times for those who turn out, but they will only be effective if implemented with due preparation.

All of these steps, though necessary, may be insufficient to fully ensure both voter safety and full access to suffrage this year. Authorities in many states are therefore turning to alternative voting options to reduce pressure on in-person voting.

One widely touted option for facilitating elections during the pandemic is mail-in voting. From a public health perspective, it is a straightforward way to maintain social distancing and reduce opportunities for transmission of the virus. It also relieves voters of the time commitment and possible economic losses associated with going to vote in person.

However, mail-in ballots are more likely to be rejected than in-person ballots, and absentee ballots from Black and Latinx voters are rejected at higher rates than those from White voters. They can also pose a financial and logistical obstacle if they require individuals to pay for postage. In April the American Civil Liberties Union filed a lawsuit to challenge such a requirement in Georgia, arguing that forcing voters to pay for ballot postage was “tantamount to a poll tax.”

To prevent an increase in mail-in voting during the pandemic from magnifying these existing problems, electoral officials should provide prepaid postage and ample opportunities for voters to correct their ballot if it is at risk of being rejected.

How a country conducts an election during a crisis says a lot about the quality and inclusivity of its democracy. In the United States, the question boils down to whether political leaders will allow the pandemic to exacerbate the existing disenfranchisement and marginalization of Black citizens, or take the steps necessary to address racial inequities built into the electoral system. Although COVID-19 poses a threat, it also offers a chance to rethink and expand voter participation, making elections more democratic for the long haul.

November is just five months away, and there is still much work to be done to ensure a credible election in the world’s most closely watched democracy. The problems are clear, and the necessary remedies are by now well known. All that remains is for those in power to act.