Illegal Mining in Venezuela is Exacerbating Violence, Ecocide, and Global Corruption. The International Community Must Act.

Concerted international action to expose and address lawlessness in southern Venezuela would help protect democracy and fundamental rights across the globe. 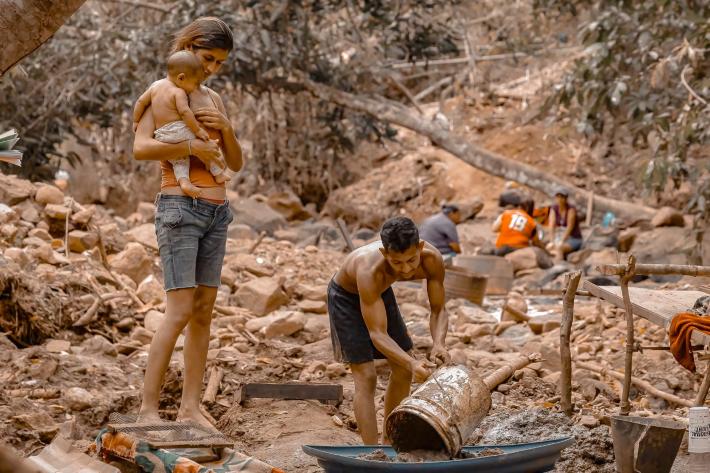 Amid worsening economic and humanitarian crises in Venezuela, the illicit mining industry is booming in its southern states of Bolivar and Amazonas—home to two national parks and more than 10 Indigenous communities whose ancestral traditions and ways of life are rooted in the land. Operated by criminal groups that employ violence and terror, the illegal mines are displacing Indigenous Peoples and unleashing environmental devastation, and their profits prop up the regime of Nicolás Maduro and contribute to global corruption. To thwart human rights atrocities and the transnational illegal mineral trade, the international community must enforce accountability mechanisms, and support Venezuelan investigative journalists and civil society groups exposing mining-related abuses. Effective, cooperative action would not just improve the lives of Venezuelans—its reverberations would reduce corruption and improve democratic governance across the globe.

For nearly a decade, Venezuelan officials have benefitted from illegal mining, extracting kickbacks and other illicit profits that have served as lifelines for the Maduro regime. The industry has further ravaged the fragile ecosystem of Venezuela’s rainforest and displaced Indigenous communities from ancestral lands, while concentrating billions of dollars in the hands of a few. Criminal organizations that run the mines have flourished by recruiting Indigenous Peoples and exerting social control with force. Heightened repression, persistent power outages, and constraints on mobility—resulting from insecurity, COVID-19 restrictions, and acute fuel shortages—hinder access to southern Venezuela for investigative journalists and human rights analysts. Intricate webs of international corruption that underpin the illicit mining industry further obscure forensic analyses and complicate efforts to identify and pursue corrupt actors. The absence of judicial independence in Venezuela, coupled with these information gaps, eliminates hope of achieving domestic accountability for the adverse consequences of illegal mining.

Internationally, Venezuela’s illegal gold operations have allowed the Maduro regime to fortify strategic partnerships with other corrupt governments to jointly evade international sanctions. Turkey and the United Arab Emirates are among the main benefactors of Venezuelan gold and its revenue, while Iran and Russia are known to offer safe harbor to illicit Venezuelan wealth; these are all countries categorized as “Not Free” by Freedom House’s annual Freedom in the World report. However, according to recent investigative journalism efforts, the transnational proliferation of Venezuela’s illicit financial activities goes beyond autocratic regimes, threatening democracies in the Western Hemisphere and Europe.

An opportunity for international cooperation

While posing complex challenges, the transnational nature and impact of Venezuela’s illegal minerals trade could enhance global cooperation to stymie corruption and seek justice at the international level. Multilateral institutions and individual states have an opportunity and a responsibility to expose and address pervasive lawlessness in Venezuela’s southern states, to pressure and pursue complicit actors in third countries, and to foster new paths to justice.

As a first step, the international community should bolster efforts to investigate and assess illicit activities, rampant corruption, human rights violations, and environmental devastation in Venezuela’s Orinoco Mining Arc. Without effective domestic remedies, international accountability mechanisms represent the only hope for truth and some degree of justice for victims. Member states of the Human Rights Council must renew the mandate of the UN Independent International Fact-Finding Mission on Venezuela on October 6. Under its initial mandate, the mission successfully documented direct responsibility for crimes against humanity committed by high-level authorities, and a systematic pattern of grave human rights violations. An extension of the mission’s duration and scope would enable investigation into brutal abuses against Indigenous Peoples and other severe violations committed in the Orinoco Mining Arc.

Considering the global impact of Venezuelan corruption, foreign governments should use their own domestic judicial systems to investigate, prosecute, and punish companies and individuals complicit in the extraction and trade of illicit Venezuelan gold. Currently, there are at least 86 open cases related to Venezuelan corruption pending in courts outside Venezuela, including in countries where the rule of law is robust, such as the United States, Switzerland, Portugal, and Costa Rica. Individual states might draw from the Global Magnitsky Act, adopted in the United States in 2017, to develop additional at-home accountability mechanisms. The Global Magnitsky mechanism functions as a deterrent, forcing foreign officials to consider repercussions from the United States government before engaging in corrupt activities, but also offers incentives to governments to improve their own accountability systems.

To combat the illicit trade of Venezuelan natural resources such as gold, diamonds, coltan, and bauxite, it is imperative that individual states effectively enforce existing international and domestic transparency regulations for multinational corporations, such as anti-money laundering efforts. States and trade associations can pressure multinational corporations to implement comprehensive supply-chain checks and due diligence processes, in compliance with the Organization for Economic Co-operation and Development’s standards, especially in terms of payment-transparency measures. States must also ensure that the Minamata Convention on Mercury is respected. Individual states must cut off the flow of mercury to Venezuela in an effort to eliminate mercury runoff from illegal mining operations, which poisons the rivers that provide water to Indigenous communities.

International action and enforcement of international regulations are crucial to thwart corruption and human rights atrocities fueled by Venezuela’s illegal mining and illicit minerals trade. However, while the international dimension is critical, the domestic aspects of the crisis should be kept at the core of the strategy. The international community should support Indigenous groups that risk their lives to preserve their land, the investigative journalists working to document severe abuses in southern Venezuela, and the human rights organizations that defend the rights of Venezuelans. International cooperation should bolster the technical capacity and resources of these groups, as well as their access to secure technology and equipment, so that Venezuelan civil society is empowered to contribute to more robust and consistent documentation and reporting. Lasting solutions to address illegal mining in Venezuela and its transnational impacts are within reach; it is time for the international community to act.