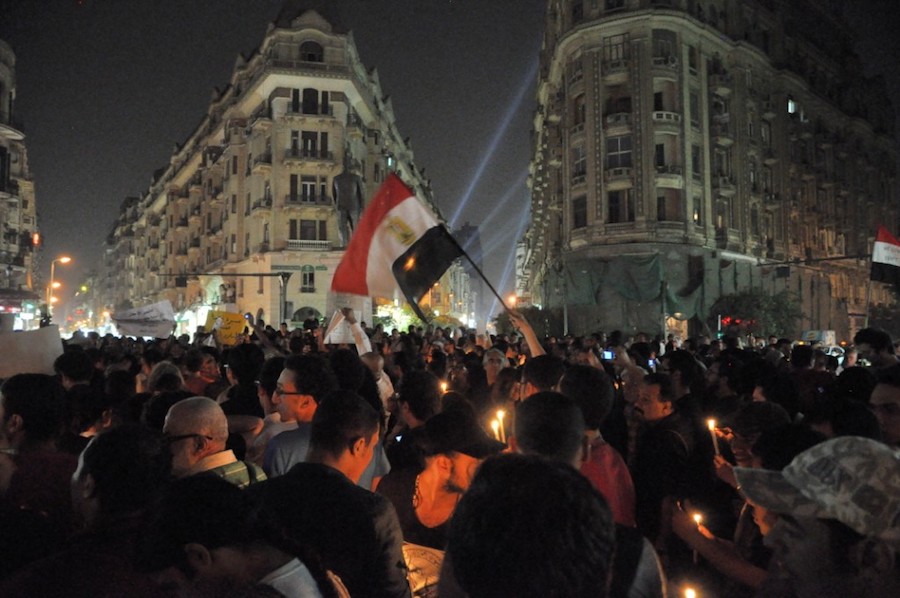 Candlelit vigil for victims of 2011 Maspero protests via flickr

In October 2011, thousands of Coptic Christians staged a sit-in in front of the Maspero television building in Cairo to protest a church demolition in Upper Egypt, which allegedly occurred because the church was constructed without the required license. Security forces responded to this peaceful demonstration with violence, firing on the protesters with live ammunition and running over some with armored personnel carriers. More than 20 people were killed, and hundreds of others were injured.

Eight years after what became known as the Maspero massacre, violence against Coptic Christians and other religious minorities in Egypt has continued unabated, and the conditions of marginalization and discrimination that motivated the Christians’ sit-in in the first place have not been addressed. Coptic Christians and other minority confessional groups, including atheists, Shia Muslims, and Bahai’s, endure regular violations of their religious freedom and physical security by state and nonstate actors alike. Destruction of houses of worship, forced conversions to Islam, lengthy prison sentences under antiblasphemy legislation, and targeted mass killings have all been reported. Just last month, a church burned down in the city of Mansoor; authorities immediately declared, without any police investigation, that the fire was caused by an electrical malfunction.

Despite international fanfare surrounding symbolic steps like the recent opening of the largest cathedral in the Middle East, as well as President Abdel Fatah al-Sisi’s rhetorical efforts to emphasize religious unity and brand himself as a defender of Copts against Islamist extremism, the government continues to treat religious minorities as subjects who are granted occasional gifts from above, rather than as rights-bearing Egyptian citizens.

The need for reform pressure from Washington

Addressing the crisis of religious freedom in Egypt and delivering justice to those who suffer for their faith on a daily basis will require the government to implement significant structural reforms. As one of Cairo’s most important security partners and the provider of $1.3 billion in annual military aid, the United States has considerable means—as well as a moral obligation—to pressure Sisi’s administration to enact these reforms.

Some of the necessary changes are directly linked to religion. For example, the government must repeal the blasphemy laws, which criminalize any insult of a “heavenly religion.” Too often, these laws are invoked to punish individuals for expressing their beliefs, silence criticism of the country’s powerful religious establishment, or settle personal vendettas. Religious minorities, especially Christians, are disproportionately targeted in blasphemy cases. Removing religious affiliation from official identity documents, which has been discussed by lawmakers in recent years, would also be a welcome reform, sending the message that the government is committed to addressing religious discrimination.

Other potential policy changes are less directly tied to religion, but they are no less crucial for protecting religious freedom. Discrimination and violence against religious minorities are symptoms of authoritarian governance and critical weaknesses in the rule of law in Egypt. In its annual Freedom in the World report, Freedom House has noted significant declines in political rights and civil liberties under President Sisi, and these different aspects of individual freedom are interdependent. Washington should therefore push for broader reforms related to the justice and security sectors and the government’s ongoing crackdown on civil society.

A repeal of the 2017 law on nongovernmental organizations (NGOs) would remove severe restrictions on the activities of civil society groups, which play a vital role in defending the rights of religious minorities and advocating for other fundamental freedoms. While the law was amended earlier this year to remove the threat of prison sentences for violations, it still criminalizes peaceful NGO activities under the pretext of national security. The United States should also push the Egyptian government to release human rights defenders who have been imprisoned for their work, including Abdelrahman Tarek from Al-Nidal Center for Rights and Freedoms, who was arbitrarily detained in September and has since been imprisoned and reportedly tortured for his activism on freedom of expression.

Additional reforms are needed to ensure that security forces are held accountable for human rights violations. Police and military personnel have generally enjoyed impunity for acts of violence against both Sunni Muslims and religious minorities, including in the case of the Maspero massacre, for which no high-ranking officials have faced consequences to date. One of many potential improvements would be an amendment to remove the special powers granted to security forces under the Emergency Law, including the authority to engage in arbitrary arrests and detentions.

An ample toolkit for bilateral leverage

The US government has several mechanisms through which it could press the Egyptian leadership to enact reforms. It could begin by imposing sanctions on officials implicated in religious freedom violations under the Global Magnitsky Act, the 1998 International Religious Freedom Act, and Section 7031(c) of the Department of State, Foreign Operations, and Related Programs Appropriations Act. Perhaps most importantly, the United States could revisit its massive military aid to Egypt and place rigorous conditions on the disbursal of funds, including progress on specific matters related to religious freedom and other fundamental rights. Military assistance cannot be viewed as an entitlement to be granted unconditionally, especially given the risk that US-provided arms and equipment are being used to commit human rights abuses.

If Congress and the Trump administration—which claims to have an “ironclad commitment” to international religious freedom—are truly invested in advancing the rights of Christians and other vulnerable communities in the Middle East, they must summon the political will to use all of the diplomatic tools at their disposal.

For Sisi, Egypt’s Pending Constitutional Changes Are “Icing on the Cake” opens in new tab