Overcrowding, lack of basic health care services, and poor hygiene infrastructure in refugee camps make them danger spots for the coronavirus. By implementing discriminatory policies and closing borders to asylum seekers, governments endanger the health and rights of refugees around the world. 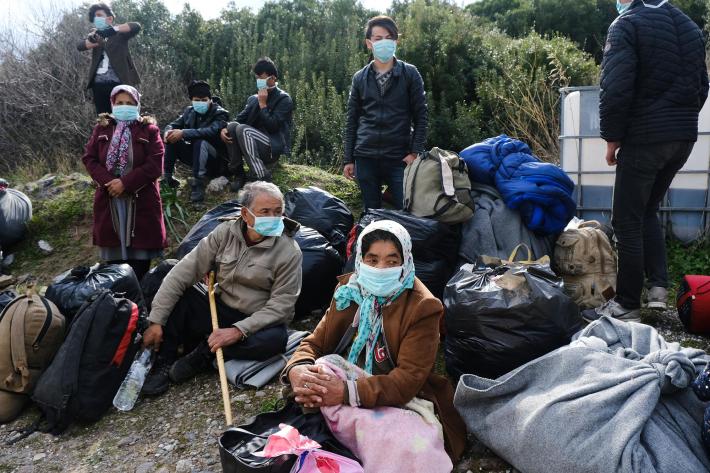 Poor access to health care and cramped and unhygienic conditions leave the 2.6 million people living in refugee camps worldwide particularly vulnerable to the coronavirus. Already, refugees and asylum seekers are subject to restrictions on their movement and other attacks on their civil liberties. But as governments rush to implement policies and restrictions in response to the COVID-19 pandemic, they place refugees and asylum seekers at even greater risk of illness and persecution. Some have closed their borders and suspended their asylum applications, violating international human rights law. Additionally, discriminatory policies that target those who live in the camps, including internet shutdowns, arbitrary curfews, and discriminatory policing, violate refugees’ and asylum seekers’ rights, and increase the threats to their health.

In the refugee camps of Cox’s Bazar, home to hundreds of thousands of Rohingya who fled violent persecution in Myanmar, people already struggle to access basic services such as food, potable water, and health care. However, for the past six months, a government-mandated shutdown has denied internet and phone access to those displaced there, leaving residents scrambling for information about how to protect themselves from the virus, and aid workers less able to coordinate a response.

Without access to mobile networks or the internet, it is virtually impossible for those living in the Cox’s Bazaar camps to find accurate information about COVID-19 and how to prevent and respond to it, and rumors and false information about the virus are rampant. Humanitarian aid workers who rely primarily on WhatsApp to coordinate emergency services and share important information with camp residents now must rely instead on pamphlets and megaphones. Additionally, the communications shutdown also hinders the ability to remotely “contact trace” as a means of controlling transmission of the virus.

Rights groups have been calling on the Bangladesh government to restore internet access to the camps since the shutdowns began in September. However, this is even more critical now in light of the COVID-19 pandemic: people must be able to access accurate information about the virus. Furthermore, aid agencies that provide services must be able to communicate freely with the community in order to minimize the impact of the crisis.

In Lebanon, which hosts 1.5 million Syrian refugees and asylum seekers, restrictions on movements have been introduced that do not apply to Lebanese citizens but specifically target Syrian refugees. For example, curfews have been implemented that restrict the movement of Syrian refugees to certain times of the day, and security forces and policing have increased to enforce these measures within Syrian communities. Similar measures have been reported in the Ritsona camp on mainland Greece, where movement is heavily restricted and monitored by the police.

Authorities in Greece have also increased security at the border with Turkey, and agents have targeted asylum seekers with tear gas, rubber bullets, and at times live ammunition. While these abuses have been carried out by Greek police for years, they have significantly increased in recent months, as the border clampdown tightened further as part of the government response to coronavirus.

Limitations on movement can be particularly difficult for people living in refugee camps, who may have to travel to designated areas to get drinking water, use latrines, and access food provided by aid agencies. Strict curfews and small windows for movement in Syrian refugee settlements in Lebanon have made it difficult for aid workers to provide ordinary health care services. In overcrowded camps on Greece’s islands, such as the Moria camp on Lesbos, recently implemented limitations on movement will lead to longer lines for water taps and bathrooms, increasing social density and thus leaving people more susceptible to the virus. These considerations must be taken into account by authorities when considering coronavirus plans for people living in refugee camps.

As countries close borders, they must respect international refugee law

More and more countries have closed their borders in an attempt to stop the spread of coronavirus, in a continuation of anti-immigrant policies that have been on the rise in recent years. These measures have increased the vulnerability of refugees and asylum seekers still fleeing violence and persecution in their home countries.

Under international law, people fleeing persecution have the right to seek asylum, and while nations around the world have closed their borders, they still have an obligation to help asylum seekers by not sending them back into danger. In March, the United Nations High Commissioner for Refugees (UNHCR) called on nations to uphold this principle, stating that nations can implement health or screening measures, but that banning asylum seekers without evidence of health risks is discriminatory and illegal under international law.

But even before the COVID-19 crisis, such calls for protection have been largely ignored by nations that frequently receive refugees, such as Greece, Malta, and Italy—none of which have indicated plans to change course. For example, search-and-rescue ships used in the Mediterranean Sea by Doctors Without Borders (MSF) have been prevented from docking at ports, and their teams arbitrarily quarantined. MSF’s Ocean Viking search-and-rescue ship, which routinely aids refugees and other migrants transiting across the Mediterranean, has been barred from docking at harbors in Italy and Malta. This prevents rescued migrants from coming ashore, and leaves those fleeing violence in their home countries without viable options.

Numerous countries including the United States, Hungary, and Cyprus have announced plans to bar asylum seekers from entering their territories, citing COVID-19 concerns. This move not only violates international rights protections, but also puts asylum seekers who are fleeing violence in greater danger if forced to return home. The United States recently issued restrictions at the Mexican and Canadian borders that allow border agents to deny entry to anyone without legal authorization to be in the country, including new asylum seekers as well as those previously held in US detention centers. Rather than taking people to detention centers where they can apply for asylum, agents are instead turning people away, violating US and international laws. Asylum seekers at the southern border are being driven into unhygienic, crowded camps in Mexico, where they face a heightened risk of contracting COVID-19.

Governments must defend the rights of refugees and asylum seekers

Anti-immigration policies around the world have been ramping up well before the COVID-19 pandemic, and the recent exacerbation of these policies further jeopardizes people in desperate need of asylum. Coronavirus should not be used as a political tool to further marginalize refugees or enact xenophobic policies. Governments must continue to uphold the rights of refugees and asylum seekers within their borders, and must continue to respect international laws during the coronavirus pandemic—and after it ebbs.

Best Practices for Protecting Privacy in the Coronavirus Pandemic