Turkey Plunges into the Abyss

Just over a week ago on July 20, a suicide bomber struck a group of left-wing, pro-Kurdish young people gathered in the Turkish town of Suruç to promote aid to the city of Kobane, just across the border in northern Syria. Thirty-two people were killed, and 104 were injured. Police identified the bomber as a young Turkish citizen linked to the Syria-based Islamic State (IS) militant group. 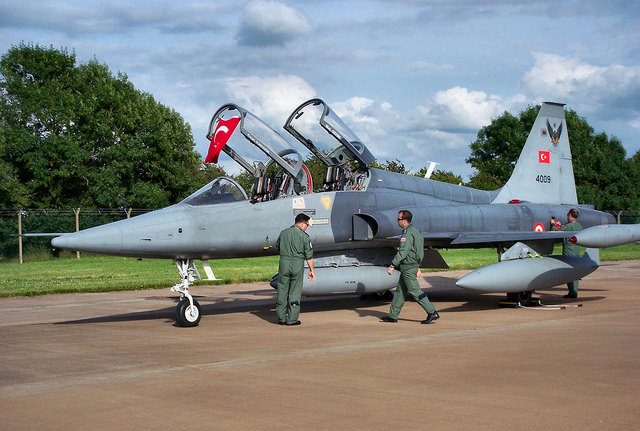 Supporters of the Kurdish movement denounced Turkey’s ruling Justice and Development Party (AKP) and the Turkish state for allowing IS to gather strength by using Turkey as its main transit route to Syria, as well as a recruiting ground and financing hub. In fact, Turkey had already started a very public crackdown on IS earlier in the month, with dozens of arrests around the country. More arrests followed during the week after the bombing, and then came news that the Turkish military would begin striking IS targets in Syria.

For the militant Kurdistan Workers’ Party (PKK), the armed wing of the Kurdish movement in Turkey, all this was too little, too late. On July 22, the PKK claimed credit for killing two policemen in another border town, saying the police had been working with IS. Though there has been violence over the past two years of a cease-fire between the PKK and the state, this was a rare and blunt announcement of responsibility. The PKK had effectively declared the cease-fire over and accused the Turkish state of collaboration with IS.

The state’s anti-IS campaign then evolved into an “antiterror” campaign. The military coupled its attacks on IS with airstrikes against PKK training camps in northern Iraq. The PKK retaliated with shootings, bombings, and attacks on police and government facilities around the country. On July 24, court orders blocked dozens of websites and Twitter accounts covering Kurdish and left-wing views, as well as entire platforms like WordPress. Mass “antiterrorism” raids across the country rounded up only a handful of IS supporters, but hundreds of Kurdish and left-wing activists. On July 28, President Recep Tayyip Erdoğan declared the cease-fire officially over, and called for the prosecution of lawmakers representing the Peoples’ Democratic Party (HDP), an outgrowth of the Kurdish movement with close ties to the PKK that on June 7 had for the first time cleared Turkey’s discriminatory 10 percent vote threshold to be seated in parliament.

It is hard to avoid the conclusion that Erdoğan and the AKP have opportunistically used the Suruç bombing and the PKK’s revenge attack as a pretext to crush the party that has threatened their hold on the parliament and government. The HDP, by clearing the electoral threshold, was crucial to preventing the AKP from renewing its parliamentary majority in the June 7 elections. Since then, Erdoğan has been stalling the process of forming a coalition government while AKP mouthpieces warn loudly that the election results will lead the country to chaos. Diving headlong into a renewed conflict with the PKK is a breathtakingly cynical ploy to make this prediction come true and thereby win the AKP a parliamentary majority when the coalition talks fail and fresh elections are called for the fall.

The frightening fact is that the ploy could work. If a suppressed HDP loses around 3 percent of the popular vote and falls below the threshold, and if the AKP can poach a larger number of Turkish nationalist votes from the Nationalist Movement Party (MHP), the AKP could return to a parliamentary majority only a few months after losing it.

Erdoğan has always been a brilliant tactician, which is why after 12 years in power he is undisputedly the most successful modern Turkish leader since Atatürk. But his knack for tactics belies his strategic myopia. Arresting members of parliament and rounding up Kurdish activists around the country is at best a return to the status quo of 2011, before the much-heralded “Kurdish opening” and the peace process with the PKK, when the state swept up hundreds of Kurdish activists in its crackdown on the PKK’s civilian wing, the Group of Communities in Kurdistan (KCK). Many of those being detained now are probably the same people arrested in that crackdown.

First, the Kurdish movement has gained strength within Turkey since 2011, especially through its successes in local elections last year and the national vote this year. The HDP holds the mayoralties of several of the southeast’s largest cities, as well as 80 seats in parliament. In no small part due to reforms the AKP promoted, Kurds can now watch Kurdish programming on state television, speak Kurdish in the streets, hang Kurdish signage on their shops, and vote for Kurdish-speaking politicians who have spent their careers campaigning for Kurdish rights. If Erdoğan wants to suppress the Kurdish movement, he will need to arrest a lot of mayors and members of parliament and take away many things that people in the southeast and Istanbul (which has the country’s largest Kurdish population) now accept as facts of life.

Second, the Kurdish movement has grown stronger outside Turkey. The PKK-affiliated People’s Protection Units (YPG) have been the most effective fighting force in northern Syria against IS, and with the support of U.S.-led coalition airstrikes, they have managed to consolidate control over a large strip of territory there. That has given Kurds in Turkey greater confidence as well, as they see their allies gathering strength across the border and implementing de facto autonomy.

If the above description is not bleak enough, after years of indecision about Syria, the United States is now apparently joining Turkey in its proactive strategic confusion. Washington has celebrated Turkey’s decisions to crack down on IS domestically and allow the U.S. bombing campaign to operate from Turkish airbases, and it is now apparently ready to go along with Turkey’s long-sought plan for a buffer zone in northern Syria. Yet at the same time, the Kurdish forces that Turkey is rounding up at home and attacking in northern Iraq are directly tied to those that have been the United States’ de facto allies against IS in northern Syria.

This is a big short-term problem, at a minimum. The YPG have been spotting for coalition airstrikes against IS, and the coalition even overruled Turkish objections when it came to supporting the YPG’s defense of Kobane last October. By arresting the YPG’s compatriots domestically and bombing them in northern Iraq, Turkey could sour the United States’ best fighting partner against IS in northern Syria—as could the constant rumors that Turkey is attacking or will soon attack the YPG directly. And there are obvious questions as to why the YPG would welcome an anti-IS buffer zone backed by the Turkish military and non-IS Islamist fighters, both of which the Kurdish militia detests.

Washington’s apparent attempt to pretend that it can separate what Turkey does in Syria from what it does at home is also a long-term problem. A comprehensive, peaceful settlement of the Kurdish issue in Turkey should be a U.S. strategic priority, both because of its importance for any settlement to the wars in Syria and Iraq and because of its importance to Turkey’s continued stability. The biggest conflicts in modern Turkey have always been over whether the state can accept minorities as equal Turkish citizens. The evident exchange of Turkey’s support against IS for U.S. acceptance of a renewed anti-Kurdish policy is a disaster of short-term thinking.

In March 2014, I wrote that Turkey was “looking into the abyss” of ethnic and sectarian conflict as then prime minister Erdoğan aligned himself with the military and turned against left-wingers, Alevis, and Kurds in a bid to win more right-wing votes for the AKP in the upcoming local elections. Sixteen months later, we are at the logical conclusion of this gambit. My argument wasn’t original. Since the Gezi Park protests in June 2013, the whole country has been talking about “polarization” and bracing for the worst. Here it is.

Correction: The original version of this article stated that IS had claimed responsibility for the Suruç bombing. No official claim of responsibility has been made.