Skip to main content
Accessibility
Freedom in the World 2018
Last Year's Score & Status
41 100 Partly Free
Global freedom statuses are calculated on a weighted scale. See the methodology.
* Indicates a territory as opposed to an independent country. 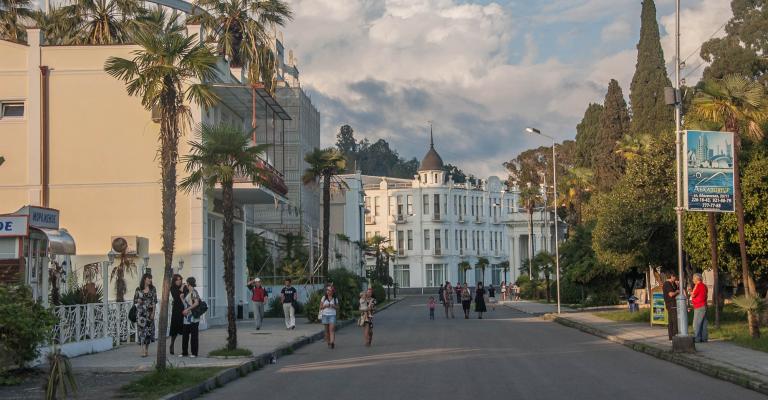 Abkhazia, a breakaway region of Georgia, has held de facto independence since the end of a civil conflict in 1993. The government is financially dependent on Russia, which maintains a military presence in Abkhazia and is one of a handful of states that recognizes Abkhazia’s independence. The political system features significant opposition and civil society activity. Ongoing problems include a flawed criminal justice system, discrimination against ethnic Georgians, and a lack of economic opportunity.

Abkhazia’s 1999 constitution established a presidential system, in which the president and vice president are elected for five-year terms.

A snap election was held in 2014 after President Aleksandr Ankvab resigned amid protests. While most established election observers do not monitor Abkhazia’s elections due to the disputed nature of the territory, informal observations indicated that the election was largely peaceful and transparent. Among four candidates, Raul Khajimba won with 51 percent of the vote, followed by former security head Aslan Bzhania, with 36 percent.

The parliament, or People’s Assembly, comprises 35 members elected for five-year terms from single-seat constituencies. March 2017 parliamentary elections were marked by some instances of intimidation, with violent attacks on two candidates. The election was voided and rescheduled in one district due to ballot irregularities. The election saw victories by many independent deputies.

Although the 2017 elections were quite competitive, elections are predicated on the exclusion of ethnic Georgians, leaving elections dominated by ethnic Abkhaz.

A large number of political parties participate in Abkhazia’s fractious politics, and freedom of association with these movements is generally respected. However, corruption within parties hampers their democratic operation. In March 2017 parliamentary elections, 112 of 137 candidates ran as independents and the remainder represented political parties.

Because political parties tend to be weak, many opposition candidates prefer to register as independents. Consequently, these candidates are less able to draw on the sort of support or infrastructure associated with membership in a formal political party.

However, opposition and independent candidates run competitive campaigns in Abkhazia. The March 2017 elections saw victories for opposition candidates including Almas Japua, an opponent of Russian ownership of Abkhazian real estate. Outgoing government ministers lost seats. Despite initial fears that the Central Election Commission would refuse to register his candidacy, ousted president Aleksandr Ankvab returned to politics and gained a seat in parliament.

While the citizenry’s choices influence domestic politics, the functioning of Abkhazia’s institutions are almost entirely dependent on economic and political support from Moscow. In 2017, 4.7 billion rubles ($78 million) of the annual 5.4 billion ruble ($90 million) budget was contributed by Moscow.

An EU report on human rights in Abkhazia, which EU authorities decided not to publish but whose authors released on their own accord, noted “a concern among some people that Abkhazia may be assimilated into the Russian space.”

Under the constitution, only ethnic Abkhaz can be elected to the presidency. The ethnic Georgian population is routinely excluded from elections and political representation; in 2017, authorities argued that the majority of Gali’s residents were Georgian citizens and therefore not permitted to vote. The Armenian and Russian communities traditionally have an informal agreement whereby parties nominate ethnic minority candidates in districts where they predominate. A handful of cabinet-level positions are held by women. However, societal norms discourage women from running for office.

While Abkhazia’s president sets the tone for most domestic policy, the ability of elected authorities to set and implement policies is limited by the economic and political influence of Moscow. In 2017, Russia had several thousand troops permanently stationed in the territory. However, there has been significant pushback against a 2014 Russian-Abkhaz treaty, provisions of which critics say threaten Abkhazian autonomy. Separately, analysts have reported that the high number of independents in parliament lead to a lack of substantive policy debates.

Abkhazia entered 2017 after a tense standoff between opposition protesters and the government. A December 2016 agreement to stabilize the situation said that Khajimba would remain in power but nominate opponents to key posts in the constitutional court and electoral commission. In May, opposition leaders accused him of not fulfilling the terms of the agreement and declared a renewed political crisis.

Corruption is believed to be extensive and is tolerated by the government, despite promises to combat it. In recent years, Russian officials have voiced concern at the large-scale embezzlement of funds provided by Moscow.

Legal amendments from 2015 allow citizens to request information about any government decisions not classified as state secrets, and to receive a response within a month. Nevertheless, the territory’s political culture is nontransparent, and social stigmas prevent citizens from requesting information. Government officials are not required to provide declarations of income.

In May 2017, the opposition sent an open letter demanding that Abkhazia’s parliament have access to all information on the activities and funding of a new Abkhazia-Russia joint law enforcement center.

Broadcast media are largely controlled by the government, which operates the Abkhaz State Television and Radio Company (AGTRK). Abkhaz journalists have criticized AGTRK for failing to air material that could be perceived as unflattering to the government. Two state-owned newspapers compete with privately owned papers. The internet and social media have become increasingly popular sources of information. Some legal restrictions apply to both traditional and online media, including criminal libel statutes.

Major Russian television stations broadcast into Abkhazia, and residents of the Gali district have access to 20 Georgian channels. Many local publications have difficulty competing with Russian media.

Muslims are allowed to practice freely, but some community leaders have been attacked in the past. Jehovah’s Witnesses are banned by a 1995 decree.

Russian- and Armenian-language schools generally operate without interference. However, Georgian-medium schools in Gali have been undergoing reorganization since 2015 in order to Russify them.

Social media has become a vibrant space for discussion on political and other topics. However, a number of taboos prompt self-censorship, especially relating to Georgians in Abkhazia and relations with Tbilisi.

Freedom of assembly is largely respected, and opposition and civil society groups mount regular protests. In 2017, protests connected to the parliamentary elections took place without incident. In a sensitive case involving human rights in Russia, around 300 protesters demonstrated in September, demanding that Moscow respect the rights of ethnic Circassian activist Ruslan Gvashev. Violent confrontations between protesters and police have occurred in the past, however.

Civil society, particularly groups representing Abkhazia’s veterans, exerts influence on government policies. Several hundred nongovernmental organizations (NGOs) are registered, though few are active. Many groups struggle to secure sustainable funding, in part because partnerships with foreign or international NGOs are complicated by Abkhazia’s territorial status. NGOs that receive funding from governments or entities that do not recognize Abkhazia face criticism from journalists and authorities.

Trade unions exist, but unions and labor activists have struggled to effectively defend the rights of workers.

Nepotism and corruption, often based on clan and ethnic ties, reportedly have a significant impact on Abkhazia’s judiciary. Implementation of judicial decisions remains inconsistent.

The criminal justice system is undermined by limited defendant access to qualified legal counsel, violations of due process, and lengthy pretrial detentions.

In 2016, Abkhazian border guard Rashid Kandzhi-Ogly killed a Georgian internally displaced person, Giga Otkhozoria. A Georgian court sentenced Kandzhi-Ogly for murder in absentia. However, a Sukhumi court dismissed evidence provided by Tbilisi, and dropped all charges against Kandzhi-Ogly in June 2017.

Isolated acts of criminal and political violence occurred across Abkhazia in 2017, and many observers concur that crime is increasing. In December, businessman Pavel Ardzinba was assassinated; Ardzinba had been implicated in one of several attempts on the life Aleksandr Ankvab. At least three Russian tourists were killed and several more were injured in attacks during the year. Prison facilities are insufficient.

Ethnic Georgian residents of the Gali region continue to face discrimination. In April, Sukhumi began issuing residence permits to Gali Georgians for five-year renewable terms. Permit holders may retain Georgian citizenship, reside in Gali, and cross the border into Georgia proper. However, in July, the separatist authorities stated that they would grant Abkhazian citizenship to any Georgian willing to “rediscover their Abkhaz ethnic heritage.” Local officials warned Gali Georgians against attempting to hold both passports amidst complaints of bureaucratic hurdles in obtaining the residency permits.

Travel and choice of residence are limited by the ongoing separatist dispute. Travel permits remain expensive and burdensome to obtain. About 90 percent of Abkhazia’s residents hold Russian passports, as Abkhaz travel documents are not internationally recognized.

In March 2017, separatist authorities closed two pedestrian crossing points over the Inguri River into territory controlled by the Georgian government, leaving just two such crossing points. This has created a burden on residents in border villages.

The rise in criminal activity across Abkhazia has raised concerns among owners of small- and medium-sized businesses. Foreigners, including Russians, are barred from buying property in Abkhazia. Uncertainty continues over property rights for ethnic Georgians in Gali, whose residency permits do not allow them to officially own or inherit property. The legal status of properties of those expelled from Abkhazia during the 1990s continues to be fraught, as internally displaced persons cannot return to claim them.

Social mores in Abkhazia are conservative; taboos remain against “nontraditional” lifestyles, including homosexuality and gender nonconformity. A 2016 law banned abortions in all circumstances apart from prior fetal death.

NGOs have expressed concern about honor killings of young women. Domestic violence and rape are serious problems, and victims have few avenues for recourse.

Equality of opportunity is limited by corruption, crime, and economic reliance on Russia. The EU human rights report on Abkhazia leaked in 2017 noted that complications arising from Abkhazia’s unresolved status were viewed as a significantly harming economic opportunity.

In January, Abkhazia introduced a new labor code that makes employment contracts compulsory and fines employers who violate workers’ rights. However, observers reported that in late 2017, not all workers were aware of their new rights, and implementation of the code was incomplete.

NGOs have expressed concern about human trafficking in Abkhazia.