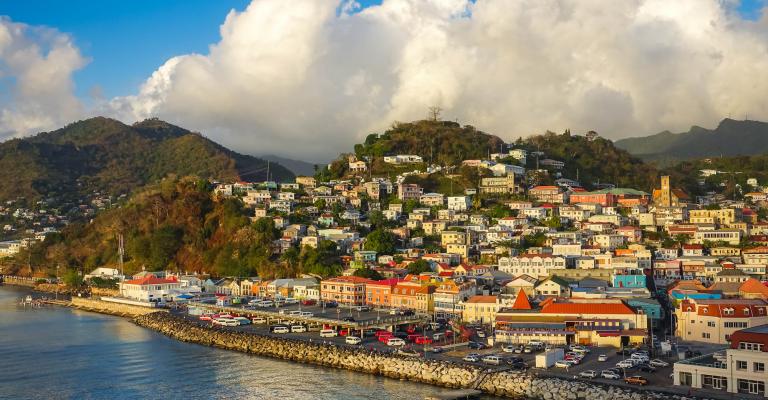 Antigua and Barbuda is a democracy that holds regular elections. Corruption in government is a concern, and women and LGBT+ people are underrepresented in politics and experience some discrimination. In 2017, Hurricane Irma devastated Barbuda: the entire island was evacuated, and many residents lost their livelihoods; some have yet to return home as house rebuilding continues. The government has sought to weaken the island’s longstanding system of communal land rights.

The country’s 1981 constitution establishes a parliamentary system, with a governor general representing the British monarch as ceremonial head of state. The prime minister is the head of government and is typically the leader of the majority party elected to Parliament. ABLP leader Gaston Browne maintained his position as prime minister after his party won a majority in the 2018 parliamentary elections.

The bicameral parliament is composed of a 17-seat Senate, whose members are appointed by the governor general, and the House of Representatives, whose 17 members are directly elected in single-seat constituencies, by means of a simple majority; representatives serve five-year terms.

The governing ABLP took 59 percent of the total vote and won 15 constituencies in the 2018 elections. The main opposition United Progressive Party (UPP) took 37 percent of the vote, but only one constituency. The BPM won the Barbuda constituency. Observers deemed the polls generally competitive and credible. Turnout was high, at 76 percent. The Barbuda Council also holds regular elections, most recently in March 2021, when the BPM won all 5 seats.

Electoral laws are generally fair and are implemented impartially by the relevant election management bodies. However, since 1984, the electoral boundaries of Antigua and Barbuda have shifted only slightly, which has created a significant disparity in the range of constituency sizes: from 1,138 (St. Phillip South) to 4,878 (St. George).

Political parties can organize and operate freely. While there are several small political parties in the country, elections have been won by either the ABLP or the UPP since 1994.

There are realistic opportunities for opposition parties to increase their support or gain power through elections. Power has alternated frequently between the ABLP and UPP.

People’s political choices are generally free from the influence of nondemocratic actors. However, a lack of transparency for party and campaign financing has given rise to concerns about the potential influence of unknown domestic and foreign interests over political candidates. The most significant case was that of R. Allen Stanford, a United States citizen, who was an influential figure in Antigua and used the country to run a multibillion-dollar Ponzi scheme. Separately, the Brazilian multinational Odebrecht SA purchased Meinl Bank (Antigua) Ltd in 2010 as part of its scheme to bribe government officials in various countries.

Women are underrepresented in politics, and only two women were elected to the House of Representatives in 2018. LGBT+ people are marginalized and face discrimination, impacting their ability to engage fully in political processes.

The elected prime minister, cabinet, and parliament determine government. There are some concerns about the influence of businesses on policymaking.

Tensions between the central government and residents and representatives from Barbuda have grown since the 2016 dissolution of the Barbuda Land Act of 2007, which guaranteed that land on Barbuda was communally owned by Barbudans and that their consent was required for its purchase and development. The 2016 law allows privatization without communal consent. The Council has resisted the Browne government’s plan to build a multimillion-dollar resort on the island due to concerns over potential environmental damage. The rising tensions led to the Council calling for the secession of Barbuda in August 2020. The next month, the government accused the Council of treason and threatened to remove it from the country’s constitution by means of a referendum. Relations remained difficult throughout 2021.

Government corruption remains a concern, and anticorruption laws are enforced unevenly. Authorities have been criticized for doing little to investigate local official wrongdoing in the case of R. Allen Stanford. Several other company officials have faced justice, but only in the United States. Similarly, few prosecutions have emerged from the Odebrecht corruption scandal.

Antigua’s Citizenship by Investment Programme (CIP) and Permanent Residence Certificate (PRC), in which individuals can be granted citizenship or residency in exchange for a sizable business investment or contribution, have been heavily scrutinized in recent years. In June 2021, Indian-born Mehul Choksi, who had previously purchased Antiguan citizenship through the CIP and was wanted on fraud charges in India since 2018, was arrested in Dominica after entering illegally from Antigua. Critics raised questions about the level of due diligence the Antiguan government gave when granting him citizenship, as well as the legal impediments to revoke it. In October, journalists uncovered that a Nigerian couple at the heart of a sizeable Ponzi scheme in Nigeria had obtained Antiguan citizenship and passports through the CIP.

The government of Antigua and Barbuda has gradually improved its accountability structures. The Public Accounts Committee can expose governmental improprieties and wrongdoings, but historically has not functioned effectively. The auditor general has several times submitted its yearly report after lengthy delays. Public officials must disclose all income, assets, and personal gifts received in their official capacity in a confidential report to the Integrity Commission. Resource deficiencies have impeded the commission’s ability to investigate corrupt individuals. Despite the Procurement and Contract Management Act of 2011, concerns remain about public procurement in relation to the expertise of officials in positions mandated by the law, the completeness of documentation, and that some applications are made retrospectively, with often a waiver being requested.

Accountability for elected officials has increased somewhat in recent years. In January 2020, Minister of Agriculture, Fisheries and Barbuda Affairs Dean Jonas was suspended for six months after allegations that he mistreated staff.

Press freedom is generally respected in Antigua and Barbuda. Criminal defamation was abolished in 2015. However, under the Sedition and Undesirable Publications Act, seditious libel is a criminal offence punishable by a maximum of two years in prison and a maximum fine of $5,000. Critical journalists remain at risk of libel suits from unhappy politicians. The prime minister has characterized the frequently critical Observer as “fake news” and a threat to the country.

Most media outlets are concentrated among a small number of firms affiliated with either the current ABLP government or the UPP.

The constitution provides for freedom of worship as well as the right to practice and change religion, and these freedoms are generally respected. A law outlawing blasphemous language is not enforced.

Freedom of assembly is guaranteed under the constitution, and the government generally respects these rights in practice. In August 2021, riot police dispersed demonstrators protesting the government’s COVID-19 vaccination policy requiring public sector workers to be vaccinated or take a test every fourth night. Authorities claimed that the protesters had not been issued the necessary permit; other political demonstrations were allowed to proceed.

Labor unions can organize freely and bargain collectively. Workers providing essential services must give notice two weeks before intent to strike. However, the International Labour Organization (ILO) has described the list of essential services as excessively broad. Strikes are rare. The introduction of a mandatory vaccination program for the public and parts of the private sector in September 2021 provoked significant opposition from labor unions. The government subsequently loosened COVID-19 related restrictions.

The constitution provides for an independent judiciary, which is generally respected by the government. In 2018, voters rejected in a referendum the adoption of the Caribbean Court of Justice as their highest appellate court. Thus, the Judicial Committee of the Privy Council, based in London, retains that role.

In recent years, the courts have increasingly asserted independence from the ABLP government—which had a history of manipulating the judicial system—with the support of the Eastern Caribbean Supreme Court. The High Court of Justice has issued several rulings that have slowed government-backed development plans for Barbuda. In October 2020, the Court of Appeal ruled that the Privy Council should decide whether the Antiguan government or the Barbuda Council controls land sales on Barbuda.

Residents of Antigua and Barbuda do not face any significant security threats. However, there were 16 homicides in 2021, a significant increase from the 9 in 2020. Prisons are severely overcrowded, and conditions within them are poor.

The 2005 Equal Opportunity Act bars discrimination based on race, gender, class, political affinity, or place of origin. There are no specific laws prohibiting discrimination against people with disabilities, or LGBT+ individuals. Societal norms discourage participation of women in some sectors of the economy, and few women hold leadership positions in businesses. Further, violence against women remains a significant problem.

Many Barbudans forced to evacuate the island due to Hurricane Irma in 2017 opposed moves by lawmakers in Antigua to eliminate the communal land ownership system that governed the island for almost two centuries, and instead establish private land ownership. The government argues that the change is necessary to assist Barbuda’s recovery.

The development of a multimillion-dollar private resort on Barbuda, led by the Peace Love and Happiness partnership, has driven tensions between the Browne government and Barbudan population and their representatives, who are concerned about the environmental impacts of the development. The Browne government has threatened those who attempt to obstruct the plans with jail time.

The Domestic Violence Act of 2015 strengthened punishments for perpetrators of domestic violence and laid out a process for victims to obtain an order of protection. However, domestic violence remains a serious problem. Same-sex marriage and civil partnerships are not recognized. In November 2020, local advocacy groups called for the Minister of Gender Affairs Dean Jonas to resign after he suggested that girls who are still legal minors could consent to having sex with older men.

In October 2021, activists called for an evaluation of reporting mechanisms for sexual violence.

Antigua and Barbuda is a destination and transit country for the trafficking of men, women, and children for the purposes of forced labor and sexual exploitation. Government efforts to address the problem are inadequate, but progress is being made, according to the US State Department’s 2021 Trafficking in Persons report. Compulsory labor is prohibited by law.