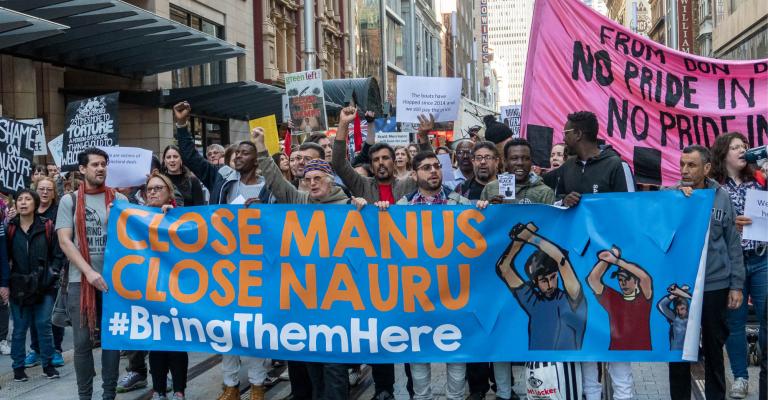 People in Nauru generally enjoy political rights and civil liberties, though the government has taken steps to sideline its political opponents, and corruption is a serious problem. The Australian processing center for asylum seekers in Nauru has attracted international criticism over persistent reports of abuses committed against and poor treatment of those housed there.

Nauru is a parliamentary republic and parliament chooses the president and vice president from among its members.

The 2016 parliamentary elections, which were considered generally free, led to the reelection of President Baron Waqa and his government. Waqa moved to consolidate his control after the election by appointing seven new assistant ministers, after obtaining legislative approval of the 2016 Assistant Ministers Bill.

The 19-member unicameral Parliament is popularly elected from eight constituencies for three-year terms. A Commonwealth election monitoring mission found the 2016 elections generally well conducted. The polls resulted in the reelection of all but one of the members of Parliament (MPs) who served in President Waqa’s government, and the defeat of four suspended opposition legislators, permitting the Waqa-led government to return with an increased majority. The opposition voiced some complaints that they did not receive equal airtime prior to the elections.

The electoral laws are generally fair and implemented impartially. The Nauru Electoral Commission is responsible for managing the entire election process. The constitution provides for universal suffrage, and voting is compulsory.

Although political parties are permitted, most candidates run as independents.

Intense political rivalries created political instability prior to 2013. However, President Waqa's government served a full term from 2013–16, and was reelected in 2016. Opposition members claimed that some measures implemented by Waqa’s first administration, such as higher candidate fees and a requirement that public employees running for office must resign three months prior to an election, were made to discourage opposition candidates from running in the 2016 polls.

Five opposition MPs were suspended without pay in 2014 for what was deemed unruly behavior, and for making remarks to foreign media that were critical of the government. Four ran for reelection in the 2016 polls, though only one secured reelection. The fifth chose not to compete.

Criminal cases remain open against three of the now-former lawmakers, in connection with their participation in a 2015 antigovernment protest. The MPs are among the at least 16 antigovernment protesters whose case will be heard by a foreign judge on the grounds that it was too “complex” for a local judge.

Another opposition lawmaker saw his passport revoked in connection with his participation in the protest, but in mid-2016 he was issued a New Zealand passport and evaded authorities to board a flight bound for New Zealand.

People’s political choices are generally free from domination by powerful interests that are not democratically accountable.

Women are underrepresented in Parliament, and in political life generally. Few women ran in the 2016 elections.

The freely elected Parliament, led by the prime minister, sets and makes policy. However, Australia has had considerable influence over politics, because its Nauru-based processing center for asylum seekers is critical to the Nauruan economy. According to a 2016 Amnesty International report, Australia pays Nauru over $26 million per year to house the facility, and a monthly fee of approximately $760 for each asylum seeker and $2,300 for each refugee. Also in 2016, the news agency Reuters reported that Australian government officials were advising the Nauru government on how to deal with disturbances by asylum seekers, opposition protests, and corruption allegations.

Corruption remains a problem. Allegations of improper payments to senior government officials, including Waqa, by an Australian phosphate company emerged in 2016. Also in 2016, Australia’s Westpac Bank announced it would no longer handle accounts for the Nauruan government, with media reports suggesting that the decision came in response to concerns about suspected financial mismanagement by the government, including money laundering and tax evasion.

Nauru lacks a law on access to public information, but the Government Information Office releases some budget information. Government officials are not required to disclose financial information.

In July 2017, the Organization for Economic Co-operation and Development (OECD) upgraded Nauru’s tax transparency rating, giving it a “largely compliant” rating. Earlier, in May, the government completed an audit of the 2013–14 government accounts. The audit capped a 15-year audit gap that officials blamed on an absence of qualified staff.

The government has made attempts to prevent journalists and other observers from reporting on operations and conditions at the processing center for asylum seekers.

Freedom of expression is constitutionally guaranteed, but this right is not always respected in practice. Foreign journalists have a particularly difficult time operating in Nauru, as the government has implemented restrictions that appear largely aimed at deterring outside coverage of the Australian processing center for asylum seekers. Since 2014, foreign journalists have been subject to a visa application fee of approximately $6,000, up from approximately $150 previously.

There were also reports of foreign journalists being denied visas to cover the 2016 elections. And after the 2016 polls, Justice Minister David Adeang attacked the foreign press, claiming that that the Australian and New Zealand media were misleading the public and not accurately reporting progress that Nauru has made towards strengthening democracy.

Separately, the 2016 Crimes Act introduced criminal charges for defamation, now punishable with up to three years in prison.

The constitution provides for freedom of religion, which the government generally respects in practice.

Authorities are not known to illegally monitor private online communications. However, authorities continued to require that internet service providers block access to Facebook and several other websites. Officials justified the policy by citing a need to protect users from obscene and pornographic content, but the policy more likely represents another example of the government attempting to restrict coverage of the Australian processing center for asylum seekers.

The constitution upholds the right to assemble peacefully, but this right has not always been respected in practice. Demonstrations related to the treatment of asylum seekers housed at the Australian processing center are often repressed. In August 2017, rights advocates reported violent arrests at peaceful demonstrators at one of the facilities. In 2016, an Iranian asylum seeker was arrested by police on charges of “threatening behavior” for his daily antigovernment protests at a Nauru family compound. And in 2015, nearly 200 refugees, including children, were arrested during a peaceful protest.

At least 16 antigovernment protestors were arrested in 2015 for protesting the suspension of MPs for making critical comments of the Nauruan government. A number of them still faced criminal proceedings in 2017.

There are no legal restrictions on the formation of nongovernmental organizations (NGOs) in Nauru. There are several advocacy groups for women, as well as development-focused and religious organizations. However, authorities have interfered with the operations of activists seeking to improve the treatment of asylum seekers.

There are no formal trade unions and only limited labor protection laws, partly because there is little large-scale, private employment. The right to strike and collectively bargain are not protected by law.

The Supreme Court is the highest authority on constitutional issues in Nauru, but appeals in civil and criminal cases are heard in the high court of Australia. Nauru’s judiciary is generally independent, but there have been concerns about undue influence by the government, which has been accused of dismissing judges for rulings officials found unfavorable. There have been concerns that government officials have pressured the judiciary in connection with the 2015 antigovernment protest case.

The constitution provides for due process rights and those rights are generally respected. However, in June 2017, the government passed a law that distinguishes between public servants who testify in favor of the government or against it. Analysts said it appeared that those who miss work to testify against the government would be placed on leave without pay, and that the law appeared to represent an attempt to discourage civil servants from testifying in favor of defendants on trial in connection with the 2015 protest.

F3. Is there protection from the illegitimate use of physical force and freedom from war and insurgencies? 3 / 4

The Australian processing center for asylum seekers has received considerable international criticism for poor treatment of asylum seekers housed there. Few arrests have been made in connection with alleged abuses of its residents.

The constitution provides for equal treatment regardless of race, country of origin, ethnicity, politics, or gender, but those rights are not always protected in practice. There are few legal protections against discrimination, which is notably a problem for women in the workplace.

Reports of widespread abuse of asylum seekers forcibly transferred to the Australian processing center in Nauru continued in 2017. The asylum seekers suffer from grossly inadequate housing; denial of health care for life-threatening conditions; and a high rate of self-harm attempts among residents who wait, at times for years, for their asylum applications to be processed.

People in Nauru are free to move around the island, and no restriction hampers people’s ability to choose their place of residence, employment, or education. Asylum seekers were granted freedom of movement across the island in 2015.

The constitution protects the right to own property and people in Nauru are able to freely establish businesses. However, as of 2014, foreigners must pay approximately $4,500 a year for a business visa, up from $300.

Domestic violence, which mostly affects women, remains a serious problem, and children are also vulnerable to violence. However, authorities have taken some efforts to address these problems, notably by approving the new protections within the 2017 Domestic Violence and Family Protection Bill, and the 2016 Child Protection and Welfare Act. Marital rape was also made a criminal offense in 2016. Same-sex marriage is not recognized by law. Abortion is only allowed when the mother’s life is in danger, but not in cases of rape; the ban on abortion in cases of rape sparked controversy in 2016, with regard to the treatment of a pregnant asylum seeker who said she was raped at the Australian run processing center.

In 2016, the government decriminalized homosexuality, which had previously been punishable by up to 14 years of hard labor.

There are no health and safety laws to protect workers outside the public sector and issues have been raised in regards to dust exposure for phosphate miners. According to the U.S. State Department, there have been no reports of human trafficking in Nauru in recent years.