President Recep Tayyip Erdoğan’s Justice and Development Party (AKP) has ruled Turkey since 2002. After initially passing some liberalizing reforms, the AKP government showed growing contempt for political rights and civil liberties, and its authoritarian nature was fully consolidated following a 2016 coup attempt that triggered a dramatic crackdown on perceived opponents of the leadership. Constitutional changes adopted in 2017 concentrated power in the hands of the president. While Erdoğan exerts tremendous power in Turkish politics, opposition victories in 2019 municipal elections demonstrated that his authority was not unlimited.

Our Work in Turkey

Turkey remains one of most challenging places in the European region to exercise one’s right to free speech and expression. In 2019, it maintained its status as the world’s worst jailer of professional journalists. Many others, including writers, civil society activists, artists, political figures, leaders from marginalized communities, digital rights activists, and everyday citizens face widespread persecution for criticizing the government. Freedom House works to strengthen respect for freedom of expression in Turkey in partnership with a local organization, the Media and Law Studies Association (MLSA). These joint efforts seek to bolster the number of qualified, practicing lawyers who can defend citizens’ fundamental right to free expression, produce research and policy analysis, and raise greater awareness among the international community on the crisis facing free speech in Turkey.

Featured Report: Perceptions towards Freedom of Expression in Turkey 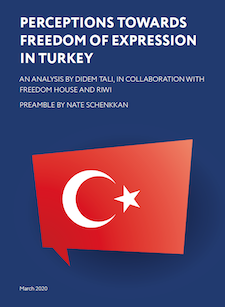 In July 2020, Freedom House, together with RIWI Corp, released a groundbreaking new report on freedom of expression and the media in Turkey. On the surface, the presence of a vibrant landscape for free expression seems contradictory, given that Turkey regularly tops global charts for the number of journalists jailed and has been ranked as Not Free since 2018 in Freedom in the World. However, what this report reveals are opportunities for expression among a dynamic population. Turkey's population is well-represented by young persons under 35, and media preferences are shifting from traditional outlets like television and radio to online platforms and social media. From these contradictions rise not only a clearer picture of the contours of expression, but also hope that this fundamental right can still be exercised.

Turkey is rated Not Free in Freedom in the World, Freedom House's annual study of political rights and civil liberties worldwide.

Turkey is rated Not Free in Freedom on the Net, Freedom House's comprehensive study of internet freedom around the globe.