In this issue: The Communist Party’s centennial reveals its insecurities, Hong Kong’s prodemocracy newspaper is killed off, and the global reach of Chinese government censorship and surveillance practices accelerates.

On June 24, Hong Kong’s prodemocracy newspaper Apple Daily released its final edition and wiped its online presence after police raided its offices and arrested staff on national security charges. The paper had 600,000 paid subscribers at the time of its closure. This image shows a notification that the newspaper’s Twitter account, which had over 500,000 followers, had been deleted; it was one of several such notices that users received on social media platforms like YouTube (1.89 million followers), Instagram (1 million followers), and Facebook (2.6 million followers). The paper also shut down its website, which had received nearly 18.7 million visits in May. (Image credit: Jerome Taylor)

Analysis: Reading between the Lines of the CCP’s Centennial Propaganda Blitz

As the Chinese Communist Party (CCP) prepares to celebrate its 100th birthday on July 1, Beijing’s propaganda and information-control apparatus is out in full force to ensure that the party—and “core leader” Xi Jinping—receive uniform praise for being “great, glorious, and correct.” Many of its initiatives illustrate the extent to which the CCP has managed to repurpose key features of capitalism—social media, e-commerce, and tourism, for example—with an ideological spin that serves the Leninist regime’s political interests.

Despite the bombast and marketing innovations, the campaign seems to be infused with insecurity. Indeed, its insistent, heavy-handed tone amounts to an acknowledgment that the Chinese people and the world at large are not entirely convinced by the CCP’s claim to be the only legitimate and desirable source of leadership for China.

Messaging, merchandise, and activities promoting the CCP have long been a part of daily life in China. But ahead of the anniversary, they have become more pervasive, surpassing the usual level of sloganeering. Some efforts fall into the formats one might expect before of an important date: new museums opening, films being released to theaters and at festivals, an upsurge in “red tourism” at sites deemed meaningful to CCP history, and sales of “red clothes” on e-commerce sites. Domestic state media are publishing congratulatory remarks from a hodgepodge of foreign politicians, including counterparts from communist parties in countries like the United Kingdom, Spain, and South Africa. Embassies and consulates have also taken to hosting events and pilgrimages to overseas “red” sites.

But these traditional exercises have been supplemented with new elements that seem aimed at saturating public consciousness and conversations, while reinforcing Xi’s position as the country’s paramount leader. A massive public education campaign focused on party history was launched in February. It included the release of 80 national propaganda slogans—including several with Xi at the center—a scale that the China Media Project described as “unprecedented in the reform era.”

By infusing reminders of the CCP’s dominance into practically every facet of Chinese society and daily life, from history and culture to popular entertainment, the regime is advancing one of the central goals of these campaigns—to reinforce the perception that China as a nation is indistinguishable from the Chinese Communist Party.

While many people in China appear to be getting into the spirit of the anniversary celebrations, others have proven less eager. Netizen reactions to the rap video were surprisingly candid, with critics saying it was simply “bad” and referring to the rappers as “100 slaves.”

Such online critiques were quickly deleted. According to the South China Morning Post, more than 7,000 comments about the video on the NetEase Cloud platform quickly dwindled to just 35. The government has also taken pre-emptive steps to suppress negative responses to its broader campaign. The Cyberspace Administration of China (CAC) launched a hotline in April for netizens to report other social media users who “distort” the party’s history or attack its leadership, and in May the CAC claimed to have ordered the deletion of at least two million posts for promoting “historical nihilism” and “insulting martyrs.”

Even in official publications, the space for admitting the CCP’s past errors appears to have shrunk. A new version of “A Short History of the Chinese Communist Party,” an official account for the general public, excised previously permissible references to the Great Leap Forward famine as a “bitter historical lesson” and to Mao Zedong’s mistakes during the Cultural Revolution.

Physical restrictions have complemented the censorship and propaganda measures. The media have reported a massive security deployment in Beijing to deter and address any unforeseen incidents, and several known dissidents have been sent on forced “vacations” outside the city for the weeks surrounding the anniversary date. Maoists in Shandong Province have also reportedly been detained since mid-May, highlighting the CCP’s wariness even of those who might voice dissent from within its own ideological camp.

What isn’t being said

In striking contrast to such displays of power is the insecurity implied in the party’s messaging and official actions. Slogans such as “Listen to the party, appreciate the party, follow the party” sound more like a parent’s urgent, frustrated demands for obedience from a wayward child than the triumphant cheers of a genuinely confident and revered ruling party.

Similarly, in the international realm, recent speeches by Xi and other top officials have called for greater innovation to reach global audiences more effectively—including by obfuscating the source of pro-Beijing messages by delivering them through seemingly unaffiliated influencers. These suggest an understanding that despite billions of dollars spent on foreign-facing propaganda, Chinese state media lack credibility. Xi’s declaration that party propagandists should make China and the CCP seem more “lovable” also underscores the limits of the regime’s heavy-handed style to date, and its failure to cultivate authentic goodwill through “soft power” attraction and persuasion.

The fundamental problem facing the CCP’s propaganda apparatus is that the reality of party history is much more unsavory than leaders are willing to acknowledge. It includes disastrous policies that cost tens of millions of Chinese lives during the Mao era, as well as more contemporary crackdowns on student demonstrators, human rights lawyers, Tibetans, Uyghurs, Christians, and Falun Gong adherents—not to mention the daily abuse and indignities suffered by victims of corruption, ham-fisted development schemes, or population controls.

That the CCP’s birthday lands on the anniversary of the 1997 handover of Hong Kong from the United Kingdom to China is a poignant reminder of how the party was unable to win the “hearts and minds” of Hong Kongers over the course of 24 years. Instead, through the enforcement of a new National Security Law, it has resorted to an iron fist to crush the territory’s political rights and freedom of expression.

Xi and the CCP leadership have refused to change course on their detrimental policies, which weaken their legitimacy among a sizable, if silenced, contingent of the population at home and many audiences abroad. They are simply doubling down on coercion, flooding the information space with hollow slogans, and investing in new ways to expand the party’s control over what can and cannot be said about its history.

As the CCP enters its second century, only time will tell whether such intransigence guarantees the party’s political survival or sows the seeds of its eventual demise.

Sarah Cook is the research director for China, Hong Kong, and Taiwan at Freedom House, where she also leads the China Media Bulletin project. This article was also published in The Diplomat on June 29, 2021.

Over the past month, the Hong Kong government has stepped up its attacks on free expression, with police arresting activists for using social media to promote alternative forms of protest after the annual Tiananmen vigil was banned. Another annual assembly, marking the July 1, 1997, handover of Hong Kong to China, was canceled by organizers due to the risk of charges under the National Security Law (NSL). News emerged in late May that Beijing’s Hong Kong and Macau Affairs Office will open a new propaganda department tasked with “managing media outlets and public opinion” in the territory.

The following were among other major developments related to media and internet freedom in Hong Kong:

Featured Pushback: Fighting to keep the memory of Tiananmen alive

Due to tightened political controls or COVID-19 concerns, for the first time in recent memory, no in-person memorial vigils were held on the June 4 anniversary of the 1989 Tiananmen Square massacre in mainland China, Hong Kong, or Taiwan. Instead, people in those locations found alternative, creative, and courageous ways to remember the atrocity and the democratic aspirations of the movement that was crushed that day.

On the mainland, the mothers of massacre victims persevered in marking the day when their children were killed and kept up their calls for the perpetrators to be held accountable, despite strict surveillance by police. Several activists in Guangzhou, Hunan, Guizhou, and elsewhere marked the anniversary with lone protests or social media posts, facing detention and harassment as a result (see image below).

In Hong Kong, for the second year in a row, residents faced a ban on the annual Tiananmen vigil in Victoria Park, with police citing COVID-19 and national security concerns. Despite the ban, many Hong Kongers gathered online to watch plays and readings, staged lone protests, or held up their illuminated mobile phones outside the park. Activist Chow Hang Tung issued a call on social media for residents to light a candle wherever they are in memory of the victims; police later arrested her for “publicizing an unauthorized assembly.” In Macau, after police banned a vigil, organizers vowed to hold it inside and broadcast it online.

In Taiwan, a local COVID-19 outbreak forced organizers to hold their vigil online, though they also erected a small memorial pavilion in Taipei. Taiwan was the only country in the Chinese-speaking world to hold an officially supported event. In-person vigils were organized in cities around the world, including Washington, DC, New York City, London, and Sydney. 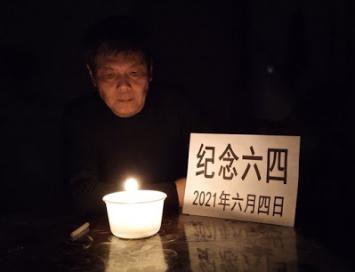 Photo caption: Chinese activist Chen Siming posted this image on Twitter on May 30, showing his commemoration of the 32nd anniversary of the Tiananmen Square massacre. The message read: “May my compatriots not forget June 4. A nation that forgets history has no future.” He was subsequently detained for 15 days by police. (Credit: Chen Siming)