In this issue: How Hong Kong’s government is encountering legal hurdles in its crackdown on prodemocracy activists; the many ways Chinese state media and netizens responded to the U.S. Capitol riot, Trump’s Twitter ban, and Biden’s inauguration; and more Chinese censorship and surveillance updates

Image of the month: Bundled Bernie

This image, of US Senator Bernie Sanders of Vermont wearing handmade mittens photoshopped among a group of Chinese grandpas playing chess is one of many memes that circulated in recent weeks after a photo of the senator was taken at the inauguration of Joseph R. Biden Jr. as the 46th president of the United States on January 20. The meme reached netizens in China on Chinese news websites like Sina Finance and social media platforms like WeChat. Another collection on a Taiwanese news site featured Sanders in scenes from Star Wars and Jurassic Park films. Credit: RadiiChina

Pushback against politically motivated prosecutions is emerging from lawyers, judges, and the principles of Hong Kong’s common law system itself.

Even as the Hong Kong government is increasing penalties for political speech and civic activism, including under the National Security Law enacted last June, the authorities are encountering some constraints on their ability to run roughshod over Hong Kong’s long-respected legal system. Hong Kong’s judiciary is a remnant of the territory’s British colonial rule, replete with the tradition of robes and wigs, but also due process, common law precedents, and independent solicitors, barristers, and judges. Perhaps it is no surprise then that pushback against politically motivated prosecutions is emerging from lawyers, judges, the international community, and the principles of the territory’s common law system itself. Events over the past month highlight these competing trends, which present an unprecedented test for the rule of law in Hong Kong.

The month of January opened with a round of mass arrests across Hong Kong. On January 6th, Hong Kong police detained more than 50 activists and politicians under the city's National Security Law. Officials claimed they had committed “subversion” by holding a primary last July to select candidates who would represent the prodemocracy camp in Legislative Council elections, which were subsequently postponed. Police seized more than 200 digital devices from the detainees and reportedly sent them to mainland authorities for data extraction. In addition to the arrests, police visited the offices of at least three news outlets, serving warrants demanding documents related to the July primary.

Within days, authorities ordered local internet service providers to block access to an activist website, using a tactic deployed pervasively on the mainland, but rarely in Hong Kong. The blocked site, HKChronicles, is a platform that has been used by activists to dox police officers (among them, those involved in attacking protesters) and expose pro-Beijing businesses. While Hong Kong Broadband Network stated it stopped users from accessing the site on January 13th, HKChronicles editor Naomi Chan claims users had difficulties accessing the site as early as January 6th.

Then, on January 14th, police arrested 11 people for providing help to activists who sought to escape Hong Kong by boat to Taiwan last summer. Those arrested included Daniel Wong Kwok-tung, a lawyer and district councilor who had provided legal assistance to the 12 activists after their detention by mainland police. On December 30th, a Shenzhen court sentenced ten of the “Hong Kong 12” to between seven months and three years in prison for illegally crossing the border. Chinese authorities have also threatened to revoke the licenses of lawyers hired to represent them.

These examples demonstrate how the Hong Kong government’s crackdown on political opposition is affecting a growing number of residents and forms of speech. But it is also running into perhaps unexpected legal obstacles. While the National Security Law grants authorities broad powers to criminalize political dissent, legal experts suggest that the political sensitivity of these cases, and Hong Kong’s own common law system, means authorities still need to build strong cases. Thus, police have not yet issued formal charges against any of the 50-plus activists arrested on January 6th. All but one have been released on bail—though their passports were confiscated to prevent foreign travel, and information on their devices will likely be used to dig up evidence of their alleged crimes.

On January 18th, three student activists detained last July for “inciting secession” became the first people arrested under the National Security Law to be released unconditionally by police, although officers told one of the students that they could gather more evidence and rearrest her. Two days later, British-born barrister David Perry stepped down from leading the prosecution of nine prodemocracy advocates related to a peaceful 2019 protest, after lawyers and policymakers in the UK raised ethical questions about his participation in the case.

Vocal efforts to protect judicial independence in Hong Kong also emerged over the past month from the highest echelons of the territory’s legal system. On January 11th, Andrew Cheung Kui-nung was sworn in as Hong Kong’s new chief justice. In his inaugural speech, Cheung criticized political pressure and attacks on the judiciary, remarking that it “must be and must remain an independent and impartial judiciary.”

Foreign governments are also responding to intensifying state repression in Hong Kong. On January 10th, a joint statement by the American, Australian, British, and Canadian foreign ministers expressed “serious concern” about the January 6th arrest of dozens of democratic activists. On Twitter, then Secretary of State nominee Antony Blinken called the arrests “an assault on those bravely advocating for universal rights.” In response to the arrests, Blinken’s predecessor, Mike Pompeo, announced sanctions against six officials, including the vice chairman of Beijing’s Central Leading Group on Hong Kong and Macau Affairs and the deputy director of Hong Kong’s national security office.

The crackdown on activists in Hong Kong is certain to continue throughout 2021 and could include deepening media and internet censorship, as well as questionable electoral reforms. Still, if prosecutors and judges—even those dealing with National Security Law cases—feel compelled by public and international pressure to retain not only a rule-of-law veneer but some substance of due process, then Beijing and Hong Kong officials will be left with two unattractive options. Either they allow space for such protections, resulting in potential acquittals or unconditional releases of individuals deemed to be high-profile political enemies of the Chinese Communist Party. Or they follow mainland China’s playbook, engaging in large-scale arbitrary detention and censorship—including of legal professionals themselves—further harming Hong Kong’s reputation as a rules-based global financial hub.

Ongoing international attention and pressure—not only from governments, but also from the business community—is going to be critical in tilting the scales as far as possible in the direction of retaining the rule of law and thereby allowing some hope for a freer Hong Kong to survive. For, as Professor Jerome Cohen asks in a recent article, the million dollar question remains, “How long can Hong Kong courts resist the pressure to act more like those on the mainland?”

Sarah Cook is Research Director for China, Hong Kong, and Taiwan at Freedom House and the director of its China Media Bulletin. This article was also published in the Diplomat on January 27, 2021.

Numerous prison sentences and other legal penalties were meted out across China to activists for free speech offenses over the past month.

As censorship and surveillance on WeChat has intensified in recent years—and with it, growing awareness of the restrictions among users—some Chinese netizens appear to be seeking out alternative and more secure messaging apps. The encrypted platform Telegram has amassed over 5 million downloads from Chinese Apple app stores since 2015, while Signal had about 1.59 million iOS downloads during the same period, according to data from Apptopia cited by the Wall Street Journal. User bases for both platforms further increased during the first weeks of January 2021. The Chinese downloads are in line with a global trend toward more secure apps in the wake of disclosures that WhatsApp was planning to share more user data with its parent company, Facebook, and as many high-profile figures in the tech sector and beyond are more actively discussing or recommending encryption. The downloads also reflect the availability of the apps on the iOS Apple stores without the need for a virtual private network (VPN). Accessing the platforms on Android operating systems is more cumbersome, but users with a VPN can download the apps from Google Play. Making an account on certain apps like Signal, however, requires a phone number, which are often tied to users’ offline identities in China.

Anecdotal evidence suggests that the growing popularity of encrypted platforms may be driven in part by WeChat users who were previously put off by the hassle of VPNs, but became disillusioned with WeChat and begin seeking out technology that offers access to content from outside the so-called Great Firewall. Moreover, as WeChat has faced a potential ban in the United States, some members of the Chinese diaspora have reportedly been shifting to Signal or Telegram and introducing their friends and relatives back in China to the services.

Despite these shifts, WeChat remains ubiquitous in China, and it is difficult to function in daily personal and professional life without it. But those downloading alternative messaging apps may be using WeChat for banking, shopping, and other services, and other platforms to access and share politically sensitive information or breaking news that would otherwise be censored or penalized on WeChat. 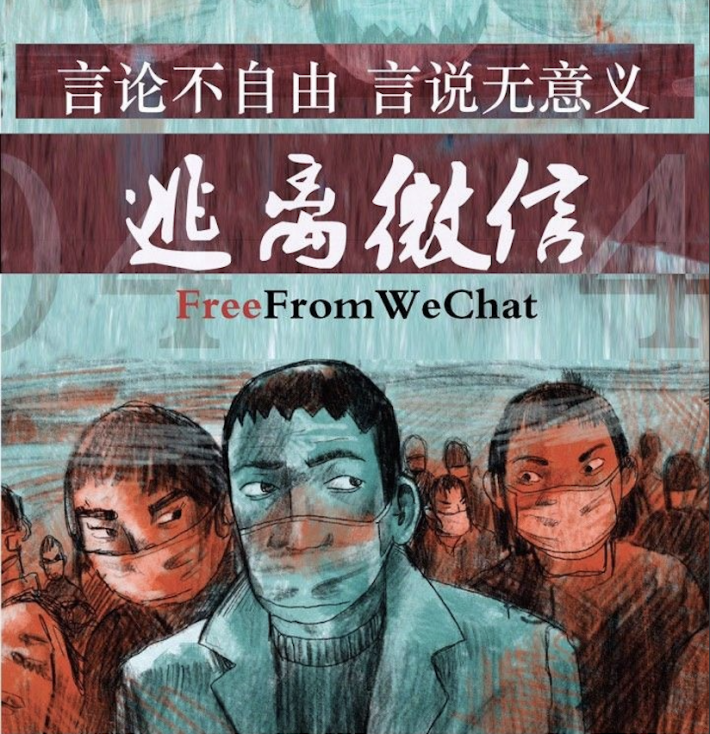