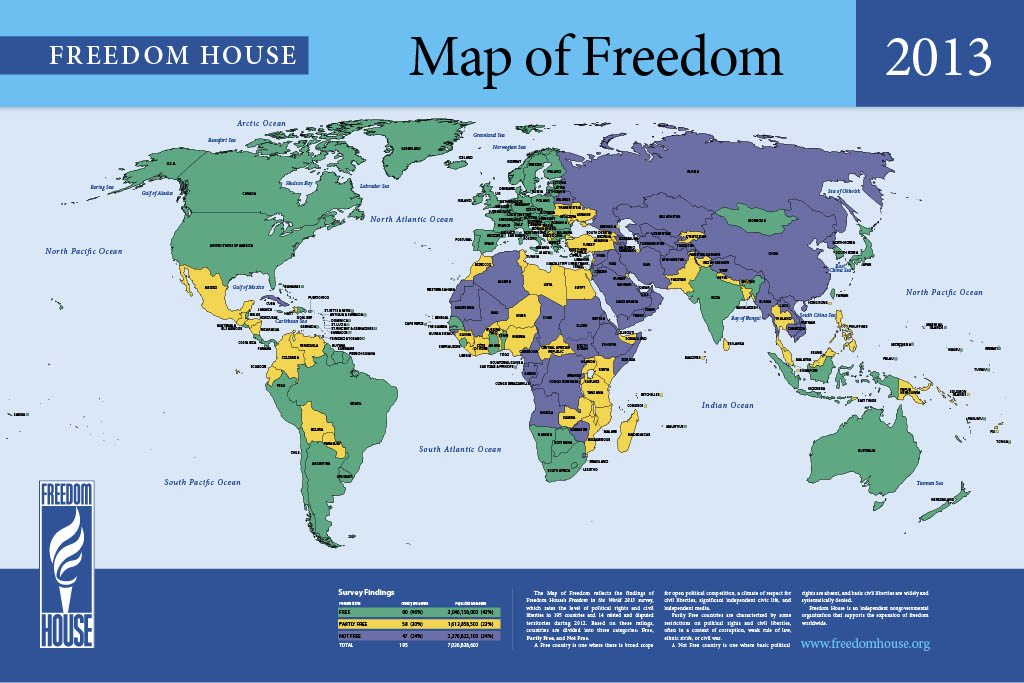 FAQ - Freedom in the World

Freedom in the World, Freedom House's flagship publication, is the standard-setting comparative assessment of global political rights and civil liberties. Published annually since 1972, the survey ratings and narrative reports on 195 countries and 15 related and disputed territories are used by policymakers, the media, international corporations, civic activists, and human rights defenders. Below are a number of frequently asked questions we receive about Freedom in the World.

What is Freedom in the World?

Freedom in the World is an annual global report on political rights and civil liberties. It has been produced since 1973. The report is composed of numerical scores and descriptive texts for 195 countries and 15 territories. Countries and territories are assessed by external analysts, primarily using in-country contacts, field research, nongovernmental and government reports, news articles, and other open-source information. The analysts’ conclusions are then vetted by teams of expert advisers, and the country report narratives are vetted in a fact-checking process. The end product represents the consensus of the analysts, outside advisers, and Freedom House staff, who are responsible for any final decisions.

What is the report’s coverage period?

How far back in time does Freedom in the World go?

The first edition covered the year 1972.

Where can I view all the past years’ scores?

The historical data are available in Excel format on the Freedom in the World landing page.

How does the scoring system work?

Freedom in the World uses a two-tier system consisting of scores and status. A country/territory is awarded 0 to 4 points on each of 25 indicators, for a maximum total of 100 points. These indicators, which take the form of questions, are grouped into the categories of Political Rights (0–40) and Civil Liberties (0–60). These two score totals are then weighted equally to determine a country/territory’s status of Free, Partly Free, or Not Free. For a more complete explanation, including the score ranges associated with each status designation, see the Methodology document here.

What topics do the scores cover?

The following is an overview of the seven main topics covered by Freedom in the World. More detailed information can be found in the Methodology document.

What is the best score a country or territory can get?

The optimal score is 100, meaning the country/territory received 4 points on all 25 indicators, for a total of 40 in the Political Rights category and 60 in the Civil Liberties category. These scores would lead to a status of Free.

What is the worst score a country or territory can get?

The worst possible result at the score level is −4. To achieve this, a country/territory would need to receive a 0 for all 25 of the normal indicators, as well as a −4 on an optional indicator that subtracts points from the Political Rights total in cases of ethnic cleansing or other types of forced demographic change. Such abysmal scores would lead to a status of Not Free.

Can I view the scores for all indicators over time?

All publicly available data can be viewed in Excel format on the Freedom in the World landing page. This includes status designations going back to the 1973 edition, total Political Rights and Civil Liberties scores back to 2003, total subcategory (A through G) scores back to 2006, and scores for all indicators beginning in 2013.

The pandemic, the myriad responses to it, and the effects of these responses have all affected the political rights and civil liberties assessed in Freedom in the World. Analysts were provided with scoring guidance derived from Freedom House’s Principles for Protecting Civil and Political Rights in the Fight against COVID-19 to evaluate the net impact of pandemic-related developments on each of Freedom in the World’s indicators.

What happened to the 1–7 ratings?

Prior to the 2020 edition, Freedom in the World assigned a country or territory two ratings—one for political rights and one for civil liberties—based on its total scores for the political rights and civil liberties questions. Each rating of 1 to 7, with 1 representing the greatest degree of freedom and 7 the smallest degree of freedom, corresponded to a specific range of total scores. The average of the ratings determined the status of Free, Partly Free, or Not Free. While the underlying formula for converting scores into status remains identical, starting in the 2020 edition Freedom in the World no longer presented the 1–7 ratings as a separate element of its findings. The ratings are still included in the raw data available for download.

What happened to the Electoral Democracy designation?

Prior to the 2021 edition, Freedom in the World assigned the designation “electoral democracy” to countries that had met certain minimum standards for political rights and civil liberties; territories were not included in the list of electoral democracies. An electoral democracy designation required a score of 7 or better in the Electoral Process subcategory, an overall political rights score of 20 or better, and an overall civil liberties score of 30 or better. In order to simplify the report's methodological outputs, Freedom House is no longer highlighting this designation, but the underlying scores remain publicly available.

How do the analysts decide on scores?

The analyst grants a country/territory 0 to 4 points on each of the scoring indicators based on the conditions and events within its borders during the coverage period. Those conditions and events may be affected by state, nonstate, or foreign actors. Analysts are guided by the main 25 methodology questions (see Methodology) as well as supplemental questions designed to provide more detail on the types of issues covered under each indicator. The analyst’s proposed scores are discussed and defended at annual review meetings, organized by region and attended by Freedom House staff and a panel of expert advisers. The final scores represent the consensus of the analysts, outside advisers, and Freedom House staff, who are responsible for any final decisions. They are intended to be comparable from year to year and across countries and regions.

How many people are involved in the analysis process?

This year there were more than 125 country/territory analysts and nearly 40 expert advisers. Freedom House staff provide input, and analysts consult with contacts in the countries under review.

How do you guard against political bias in the analysis process?

Freedom House minimizes subjectivity as much as possible through a series of standards and reviews. The staff thoroughly vets analysts prior to contracting them in order to avoid political bias or lack of methodological rigor. Once selected, analysts are asked to ground any proposed score changes in the real-world events of the year under review, typically confirmed through reputable news media or other credible information sources. After analysts submit their proposed scores and draft narrative reports, all submissions are reviewed and discussed by fellow analysts, Freedom House staff, and outside experts. Scores are also compared with those of other countries in the region and the world, both that year and across time, to ensure that they are rational and proportional, and that the methodology is being applied consistently.

Is Freedom in the World biased in favor of US or Western values?

Freedom House believes that all people are entitled to freely choose their own leaders; form competing political parties; have a government free of corruption; obtain information from a free press; worship and study freely; engage in peaceful assembly and association; benefit from the rule of law and legal equality; and make their own choices about travel, economic engagement, and family life. The set of indicators measured by Freedom in the World is derived from the Universal Declaration of Human Rights, adopted by the UN General Assembly in 1948. History has shown that despite prejudiced assertions to the contrary, people of all regions and cultures desire these rights and are capable of exercising them responsibly.

Freedom House believes that sustainable economic growth is far more challenging in countries that lack basic freedoms. Free elections provide long-term political stability and allow citizens to peacefully replace ineffective or corrupt leaders. And independent media provide a check on government, verifying official claims of success and exposing abusive practices. There is no valid reason for people in any country or territory to postpone their enjoyment of basic freedoms in exchange for the promise of economic growth.

Can a country’s scores be affected by natural disasters or climate change?

Only indirectly. Freedom in the World measures people’s ability to exercise their political rights and civil liberties. These rights and liberties are, by definition, a function of human society, and the report is mainly concerned with the extent to which they are upheld or restricted by human beings, in the most immediate sense. A hurricane strike, a drought, or flooding may cause great suffering, and their severity could be attributed in part to human-caused climate change, but they would probably not factor into a country’s scores unless, for example, recovery efforts were hampered by corruption or violence, or the disaster was used as a pretext to cancel elections or otherwise waive basic rights.

Why does Freedom in the World cover certain territories separately and not others?

Assessment of a territory does not imply an endorsement of any side in a dispute over sovereignty. Freedom House typically takes no position on these disputes as such, focusing instead on the level of political rights and civil liberties in a given geographical area.

Do a government’s policies and activities abroad affect the scores of its own country?

No. The scores are meant to reflect conditions experienced by people on the ground within a given country or territory’s borders, which may be affected by the government, nonstate actors, or foreign powers. Thus, if a state carries out air strikes or abductions in another country/territory, any direct effects on the enjoyment of political rights and civil liberties will be felt—and therefore scored—primarily in the second country/territory.

Is it really possible to measure freedom?

Freedom in the World’s approach entails a comparative examination of concrete examples, holding up country against country and year against year. While this is not an exact science, it is rather clear, for instance, that people in North Korea are less free than people in Finland. It is also clear that Romania was more free in 2005 than it was in 1985. Different environments can thus be arranged along a continuum using fixed criteria, with specific institutions, laws, conditions, and events cited to justify each placement. This is the work of Freedom in the World.