The worst predictions about the National Security Law have come true. The closure of Apple Daily is just one example. 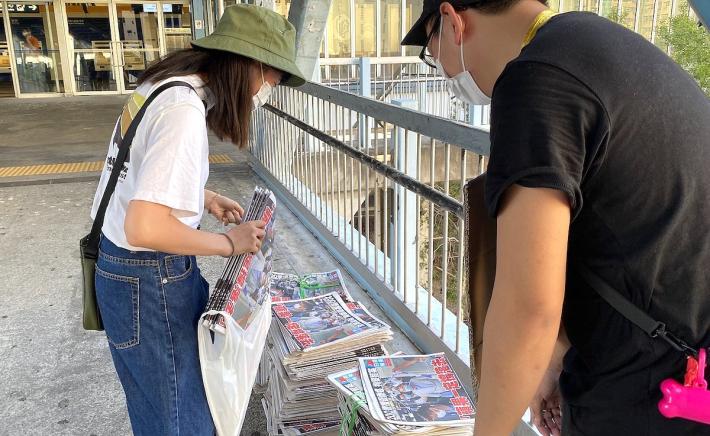 Apple Daily, Hong Kong’s leading prodemocracy newspaper, has shut down and shuttered its affiliated social media accounts with millions of followers. The website of an exile activist group has been blocked, rendering it inaccessible to internet users in Hong Kong. The Chinese government office responsible for the territory has opened a new propaganda department tasked with “managing media outlets and public opinion.” And police banned the July 1 march marking the anniversary of Hong Kong’s handover to China for the second year in a row.

These events from the past month are just a sample of similar incidents that demonstrate Hong Kong’s profound transformation since Beijing’s imposition of the National Security Law (NSL) on the territory exactly one year ago. Before the law, Hong Kong was still home to a dynamic and pluralistic media scene, despite years of growing pressure, and its online spaces were largely uncensored. Today, both the Chinese and Hong Kong governments are effectively applying the mainland’s model of information management to extinguish freedom of expression.

The death of a leading newspaper

When the NSL was adopted last June 30, Hong Kong chief executive Carrie Lam tried to reassure local residents and the international community that it would only affect a small number of people and would not be applied retroactively. The forced closure of the widely read Apple Daily is perhaps the most glaring indication of how false these pledges have proven to be.

Apple Daily released its final edition on June 24 and shut down its website, online television channels, and social media accounts following an unprecedented police raid and the arrests of its chief editor, other newsroom staff, and executives at the parent company Next Digital, all under the NSL. Authorities accused the newspaper’s staff of “colluding with foreign forces” by publishing articles—beginning in 2019, prior to the NSL’s adoption—that called for foreign sanctions against Hong Kong and Chinese government officials. Police also froze HK$18 million (US$2.3 million) in corporate assets, leaving the company unable to pay staff or receive payments from lenders.

On June 23, police arrested the paper’s lead opinion writer on charges of “conspiracy to collude with foreign forces,” and the outlet ordered other journalists not to come into the office due to the risk of being arrested. Several journalists resigned. Before Apple Daily removed all of its online content, police had reportedly intended to demand that the paper delete approximately 100 articles from its website, according to local media. The company also closed a sister publication, Next Magazine. On June 27, police arrested a former Apple Daily editorial writer at the airport, sparking fear among other independent outlets, like Stand News, which removed all of its online commentary articles and took measures to protect staff.

The loss of Apple Daily will be felt in Hong Kong and globally. It had 600,000 paid subscribers at the time of its closure, and its website received nearly 18.7 million visits in May. The newspaper had 2.6 million Facebook followers, 1.89 million followers on its YouTube channel, 1 million followers on its Instagram account, and over 500,000 followers on Twitter. The deletion of all of these accounts late last week cut off audiences that been carefully assembled over the past decade.

Even more than the vibrancy of its media sphere, the openness of the internet and the absence of website blocking in Hong Kong have long been a principal distinction between its information environment and that of mainland China. Under the NSL, this distinction is rapidly being eliminated.

Starting on June 18, Hong Kong internet service providers (ISPs) blocked access to the exile website 2021 Hong Kong Charter (2021hkcharter.com). Police would not comment when asked whether they had ordered the block, which the NSL permits them to do. The 2021 Hong Kong Charter website went down temporarily earlier in June after Hong Kong police ordered its Israel-based hosting provider to close it. Other websites that have been blocked this year, either temporarily or permanently, include the activist website HKChronicles and multiple Taiwanese sites, such as that of Taiwan’s transitional justice commission.

Amid a climate of increased self-censorship, journalists and activists are concerned by the government’s plans to adopt new laws on doxing and “fake news.” On May 11, the Constitutional and Mainland Affairs Bureau introduced a paper proposing amendments to the Personal Data (Privacy) Ordinance that would make doxing punishable by up to five years in prison and a HK$1 million (US$128,000) fine. The proposed law would also empower the Office of the Privacy Commissioner to order that content be removed. Overseas websites will be required to abide by the legislation, and if they refuse to remove content, the websites could be banned and local staff arrested. The bureau said the amendments would be drafted and submitted to the Legislative Council for a vote this year.

Shortly before the doxing amendments were announced, Lam said that the government was working on “fake news” legislation. Hong Kong’s police chief has also publicly called for a “fake news” law to combat mistrust of the police. The digital news site Post 852 reported on May 14 that it was suspending operations, with the founder acknowledging the outlet’s financial struggles but pointing to the expected “fake news” law as the primary catalyst for the decision. He then dismissed the outlet’s entire staff.

On June 1, the government introduced another bill that would require real-name registration of SIM cards and grant police the authority to request such data from telecommunications companies without a warrant in certain circumstances. The measure would go into effect September 1 once adopted by the legislature, which has no opposition members.

The year to come

Since the NSL came into force one year ago, many observers’ concerns about its potential effects have sadly proven prescient. During the second year of the law’s implementation, Hong Kong authorities are unlikely to be content with Apple Daily’s closure. Independent online news outlets—like Stand News, Initium Media, and Hong Kong Free Press—may be next on the chopping block.

There is ample reason to expect increased removal of content, mass resignations at news outlets and related companies, and expanded self-censorship. More websites may be blocked, including major social media platforms, as authorities look to stamp out opposition and criticism online. With the new law requiring real-name SIM-card registration, Hong Kong residents’ ability to remain anonymous online will be stripped away, further empowering police and prosecutors to engage in reprisals for critical speech. One year from today, there will be even fewer meaningful differences between the news media and internet in Hong Kong and their counterparts in mainland China.

Check out the China Media Bulletin, everything you need to know about China's changing media freedom landscape.