Freedom on the Net | Freedom House
Skip to main content

Home » Reports » About Freedom on the Net

About Freedom on the Net

An annual study of internet freedom around the world

Freedom on the Net Report Editions

WHAT IS FREEDOM ON THE NET?

Freedom on the Net is a Freedom House project consisting of cutting-edge analysis, fact-based advocacy, and on-the-ground capacity building.

The hallmark of our analysis is the annual Freedom on the Net report. It features a ranked, country-by-country assessment of online freedom, a global overview of the latest developments, as well as in depth country reports.

In addition, Freedom on the Net has newly launched the Internet Freedom Election Monitor to estimate the risk of restrictions on internet freedom during upcoming elections.

The key trends and emerging threats highlighted in reports are then used in national and international advocacy campaigns by Freedom House. Our findings are also used by activists worldwide in working for local change, by international development agencies in designing programs and determining aid recipients, by tech companies for business intelligence and risk assessment, by journalists who cover internet rights, and by scholars and experts.

The project builds the capacity of its network of researchers—in-country bloggers, academics, journalists, and tech experts chosen for their promise and expertise—by providing the analytical tools to serve as the future generation of internet freedom defenders around the world.

“Freedom on the Net is an indispensable resource for anyone who cares about freedom in the digital age. The report provides excellent analysis of existing restrictions on speech online, and it highlights the emerging threats that we'll be fighting in the months and years to come.”

As we increasingly rely on the internet, it is important that the rights we enjoy offline are also protected online. The freedoms of speech, information, privacy, and association enshrined in international covenants are fundamental to the upholding of liberal democratic values. Even in closed societies, technology can penetrate longstanding political and media restrictions, carving out a limited space for freedom online.

Technology is a tool like any other; it can be used by both evaders and enforcers of government censorship and surveillance. Authoritarians, too, have understood the internet’s potential for individual empowerment and over the past few years have worked to build a new barrier of fear in the online domain.

Given this emerging battleground for individual rights, Freedom on the Net measures internet freedom in order to identify threats to online freedoms and opportunities for positive change. Our reports seek to inform the wider community of activists, journalists, policymakers, entrepreneurs, and ordinary citizens in order to advocate for an internet characterized by freedom, openness, and security for all.

WHAT DO WE MEASURE?

Freedom on the Net measures the subtle and not-so-subtle ways that governments and non-state actors around the world restrict our intrinsic rights online. Each country assessment includes a detailed narrative report and numerical score, based on methodology developed in consultation with international experts. This methodology  includes three categories: 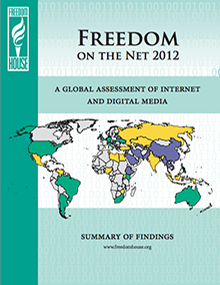 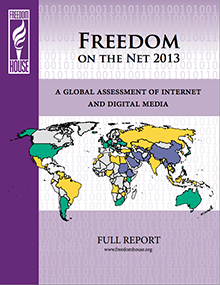 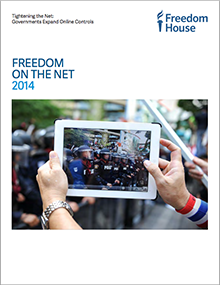 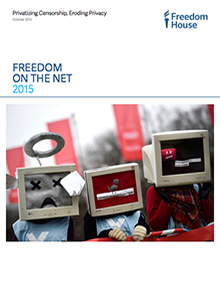 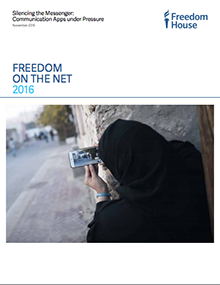 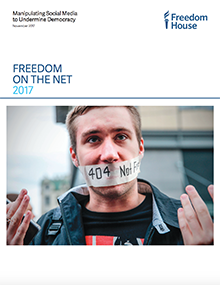 WHAT IS OUR IMPACT?

Freedom on the Net is the most widely utilized resource worldwide for activists, government officials, journalists, businesses, and international organizations aiming to understand the emerging threats and opportunities in the internet freedom landscape globally, as well as policies and developments in individual countries.

The project shapes global discussions on internet freedom through its widespread media coverage. The report receives hundreds of media mentions in over 70 countries each year, including in The New Yorker, the Washington Post, The Economist, and the Guardian. Policymakers also turn to Freedom on the Net to help inform various global issues as they unfold; it has been cited by senior government officials such as the President of Estonia, Sweden’s Minister of Foreign Affairs, the Canadian Foreign Affairs Minister, and U.S. Congressman Ed Royce.

Activists and civil society organizations use Freedom on the Net extensively to draw attention to their government’s policies and to call for positive change. In Nigeria, Freedom on the Net served as the foundation for a Digital Rights and Freedom Bill drafted by civil society in 2014. NGOs in Pakistan used the project for advocacy at the Human Rights Council to press their government on their internet freedom record and as part of a shadow submission on digital rights during the country’s Universal Periodic Review in 2012. The report is frequently cited at high-profile international events such as the Internet Governance Forum, UN sessions, and Freedom Online Coalition meetings.

Representatives from the private sector and government agencies also turn to our reports. Freedom on the Net has been used by tech companies large and small to perform market research and due diligence, as well as to understand how their practices can serve, promote or preserve internet freedom. U.S. foreign aid agencies such as the Millennium Challenge Corporation, a poverty reduction mechanism conditional on a country’s upholding of human rights, utilize Freedom on the Net’s research findings as an indicator to determine aid eligibility for prospective developing countries.

"Freedom House's 'Freedom on the Net' report is the premier measure of the state of fundamental freedoms online."

“As online freedom, digital security, and internet governance assume greater prominence in our global debates, Freedom House’s 'Freedom on the Net' will continue to play a vital role in framing the debate among international stake-holders. It really provides an indispensable framework for debating the issues.”

WHICH COUNTRIES DO WE STUDY?

Freedom on the Net has expanded from covering 15 countries in our 2009 pilot edition to 65 in the latest report. Countries are selected on the basis of the size of their internet population, their regional or global relevance, as well as the unique quality of their restrictions or protections on the internet. The countries selected for the report covers 88 percent of the global internet population, ensuring the project analyzes the vast majority of users.

WHO RUNS FREEDOM ON THE NET?

Freedom on the Net is a collaborative effort between a small team of Freedom House staff and an extensive network of local researchers and advisors in 65 countries. Our in-country researchers have diverse backgrounds—academia, blogging, traditional journalism, and tech— and track developments from their country of expertise. In the most repressive environments, Freedom House takes care to ensure researchers’ anonymity or, in exceptional cases, works with foreign nationals living outside their home country.

WHO MAKES IT POSSIBLE?