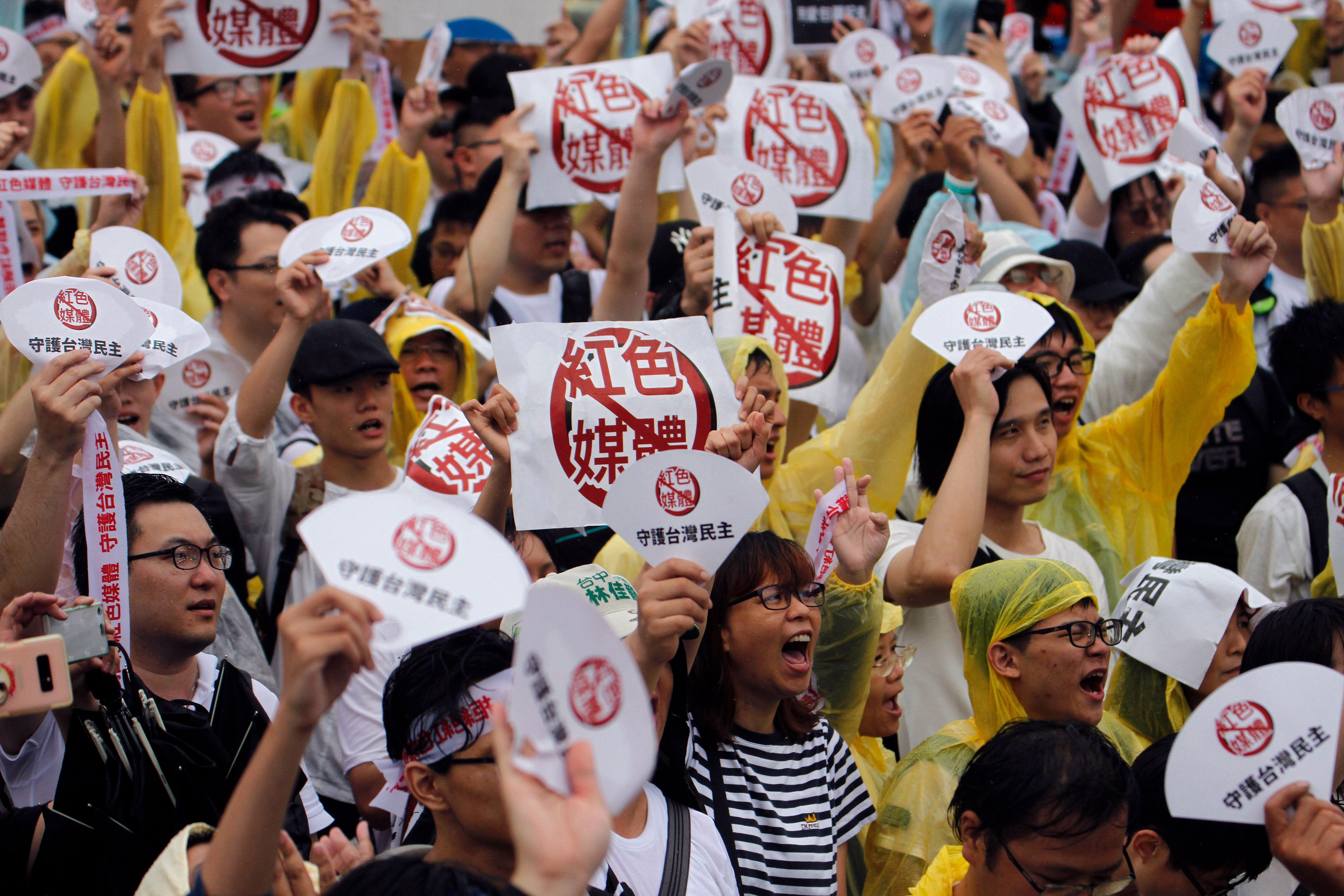 TAIPEI, TAIWAN – June 23, 2019: Protesters hold placards with messages that read “reject red
media” and “safeguard the nation’s democracy” during a rally against pro-China media in front of the Presidential Office building in Taipei. Photo credit: HSU TSUNHSU/AFP via Getty Images.

The Chinese Communist Party (CCP) plays a leading role in advancing global authoritarianism, including through efforts to shape and manipulate news and information. Beijing’s Global Media Influence (BGMI) is Freedom House’s first global assessment of CCP media influence and democratic resilience to that influence. Our research has identified the key methods by which the CCP and its proxies work to influence news coverage abroad. Scores determined according to a comprehensive methodology and qualitative country narratives assess these methods, their impact, and a country’s preparedness to safeguard against or respond to manipulation efforts.

Beijing’s methods for shaping information environments around the globe are complex and often opaque. The BGMI project aims to reveal the many forms media influence from Beijing can take— ranging from acceptable forms of public diplomacy to covert, coercive, or corrupting tactics that risk undermining democratic freedoms.

The project also examines direct responses to CCP media influence in each country under review, and its underlying resilience or vulnerability to problematic influence or manipulation efforts emanating from Beijing. Relevant factors considered include laws and practices that protect press freedom, the extent of critical and diverse news coverage related to China and Chinese investment in the local economy, and both generic and China-specific initiatives by governments and civil society to counter disinformation, screen investments in media and digital industries, enhance transparency, and protect press freedom and freedom of expression.

The BGMI methodology was created by Freedom House in consultation with international experts on media freedom and regulation, CCP foreign influence, disinformation, the Chinese diaspora, and the regions of the world under study. The resulting framework captures a vast array of issues related to understanding Beijing’s media influence and potential country responses through the lens of upholding freedom of expression and human rights.

The 30 countries included in this study were selected based on several criteria. First, as a study not only of Beijing’s influence efforts but also of the response and impact in democratic settings, the sample for this project was limited to countries that are rated Free or Partly Free by Freedom House’s Freedom in the World index. Second, to achieve a robust global analysis we sought a diverse sample in terms of geography (six regions covered), language (over 25 local languages), and nature of bilateral relations with China (friendly versus adversarial; Belt and Road Initiative member or not; China as a major or minor trading partner or source of investment). Third, we looked for countries where there was clear evidence of media influence from China, and examples of resilience to CCP media or political influence. Fourth, we considered a country’s strategic importance and population size, with a preference for countries with relatively large populations or strategic relevance.

Freedom House staff invited at least one local researcher to serve as the primary analyst for each country, training them to assess Beijing’s media influence efforts and local resilience according to the project’s comprehensive research and scoring rubric (see below). Local researchers conducted desk research and interviews with members of the media, government, and civil society, then submitted responses to a questionnaire (see below), with responses determining proposed scores. Local researchers then attended a review meeting focused on their region to discuss key findings, regional trends, best practices, and recommendations. Freedom House staff fact-checked research, supplementing it as needed via Chinese-language or other research, and authored country reports. The local analyst, a regional adviser, and other relevant experts then reviewed the scores and country narratives. After completing regional and country consultations, Freedom House staff performed a final review of all narratives and scores to ensure their comparative consistency and integrity.

Country narratives (6,000-8,000 words) provide depth and nuance to the analysis, including details supporting scores and broader dynamics related to both influence efforts and domestic resilience and responses. Translations of all country reports into the dominant local language will be published to ensure accessibility of the research to policymakers, civil society, and media professionals in each country of study.

Drawing on the resulting data set and robust cross-country qualitative analysis, Freedom House staff determined the global report’s key findings. The resulting study is the first application of this methodology to a set of countries. Future editions, pending funding, may refine and update the methodology, including to incorporate emerging influence tactics or response initiatives. The end product represents the consensus of the analysts, advisers, and Freedom House staff, who are responsible for any final decisions.

Most questions are worth 1 point, assessing the presence or absence of a particular type of law, policy response, media action, or civil society initiative. Select questions are worth more than one point to give sufficient weight to underlying democratic rights, press freedom protections, existing expertise on China, and public skepticism towards Chinese state-produced content.  The “problematic pushback” section includes five questions each worth 1 negative point that is subtracted from the overall Resilience and Response score. The final score for the Resilience and Response is a sum of all points accrued, adjusted to an 85-point scale to match the range reflecting Beijing’s Media Influence Efforts. [Formula used to adjust the Resilience and Response score = (RR positive score - PP score) * (1.18)]

Based on the resilience and response score, Freedom House also assigned the following status ratings reflecting the extent of Response and Resilience in a particular country. (While the score is intended to reflect degree of resilience, countries may receive low scores due to a low rate of influence efforts to respond to.)

Vulnerable or Resilient: The Beijing’s Media Influence Efforts score is subtracted from the Resilience and Response score to product the Resilience or Vulnerability rating. This rating reflects how well equipped a country is to respond to influence efforts it is facing. Freedom House assigned the status rating as follows:

Scores strictly cover the period of January 2019 to December 2021, while analysis in narratives may extend beyond this timeframe as needed for context or updates.

Freedom House is providing a blank template of the methodology questions and relevant formulas for arriving at a score and status for any researchers, journalists, or civic groups in a country not covered in the initial sample who would wish to apply the analytical framework to their own country. Please provide credit to Freedom House for the methodology.

The full dataset for the 30 countries included in this study is available here.

Note: All questions are worth 1 point unless otherwise indicated.

Problematic pushback (5 questions, each worth -1 point)

Scores and findings from the 30 countries surveyed in the BGMI report.