In this issue: What to watch for in China’s internet controls in 2021, how regulators are targeting journalists, live-streamers, and tech firms, worsening attacks on media in Hong Kong, and Chinese citizens’ efforts to resist expanding facial recognition surveillance.

This poster of bunnies holding rice with the #MeToo hashtag—referencing a homonym (“mi tu”) devised to circumvent censorship of the hashtag—circulated on Chinese microblogging platform Sina Weibo as users expressed support for Zhou Xiaoxuan, a 27-year-old woman who has accused prominent Chinese Central Television (CCTV) host Zhu Jun of sexual assault. While expressions of support for Zhou circulated widely on December 2, the day of a court hearing in the case, Chinese netizens complained of silence on the case by official media and the censorship of related posts and hashtag pages related on Sina Weibo and Douban social media platforms. Credit: WhatsonWeibo

Analysis: Five Predictions for Beijing’s Assault on Internet Freedom in 2021

The events of the past year point to several censorship patterns that will likely gain prominence in the months to come.

China has long been home to the world’s most sophisticated system of internet controls. Indeed, in Freedom House’s Freedom on the Net 2020 report, published in October, it was ranked the lowest among the 65 countries assessed for the sixth year in a row.

But even by China’s own standards, censorship and surveillance were pushed to unprecedented extremes this year as the government tightened its grip on the activities of hundreds of millions of internet users. The Chinese Communist Party (CCP) also extended its repression and disinformation into Hong Kong and around the world in ways that dramatically increase the stakes for foreign governments, technology firms, and ordinary citizens.

This raises the question: what is 2021 likely to bring in the country that is defining the contours of 21st century digital authoritarianism?

In light of both the Freedom on the Net findings and more recent events, these are five trends to watch for in the coming year:

Despite the tight constraints and the risk of criminal penalties, bright spots in the struggle for internet freedom in China remain and made an appearance in 2020. In the early weeks of the coronavirus outbreak, investigative journalists, video bloggers, and their sources worked to trace the origins of the pandemic, identify those responsible for the initial cover-up, and report from within the quarantined city of Wuhan. Even after the reporting was censored, internet users devised creative methods to preserve it—including replacing Chinese characters with emojis, translating into Korean, or using Ethereum blockchain transactions. Netizens openly criticized the authorities’ cover-up efforts and their stifling of open discussion of the government response to the crisis, while citizen journalists posted unvarnished videos of events on the ground. In early February, as news of the death of whistleblowing doctor Li Wenliang spread, the hashtag “I want free speech” began to trend on Weibo, garnering millions of views in the hours before it was censored.

These activities served as a reminder of the deep desire for credible, independent information and the competency of Chinese journalists and citizens to provide it when given the chance. While such defiance of information controls will be especially difficult in 2021, as the CCP tries to avoid any embarrassments during its centennial year, new examples of effective grassroots resistance may still break through. Given the dangers involved, they deserve the outside world’s attention.

Sarah Cook is Research Director for China, Hong Kong, and Taiwan at Freedom House and director of its China Media Bulletin. This article was also published in the Diplomat on December 10, 2020.

In addition to examples of outright censorship, over the past month, government regulators in China have been especially active imposing preferred ideological standards and restrictions on film festivals, journalists, live-streamers, and the country’s largest tech firms.

In recent weeks, prosecutors have filed criminal charges against outspoken entrepreneurs and social media users who criticized the party or expressed support for human rights and other activists, with some cases resulting in heavy prison sentences.

Journalists—especially investigative reporters—and other independent media in Hong Kong faced new restrictions and threats in past weeks. Several incidents highlight the precarious situation for free media in the territory.

These cases may presage deepening controls to come. At a November 23 press conference, Hong Kong Journalists Association chair Chris Yeung warned that the Hong Kong government is likely to use the National Security Law to enact harsher restrictions on the media. However, recent violations were accompanied by some pushback. On November 19, the city's High Court found the police practice of hiding identification numbers from the public to be a violation of the Hong Kong Bill of Rights. Separately, on December 3, Apple Daily employees posted an open letter to readers, pledging that “we will never give up on embracing freedom and democracy,” despite the escalating legal harassment of owner Jimmy Lai. And a rare joint op-ed written by American, Canadian, British, and Australian diplomatic representatives in Hong Kong published on November 22 in the South China Morning Post called Bao Choy's arrest “a worrying development” and stated that press freedom in the city “is under attack.”

Even as surveillance expands throughout China, a growing number of Chinese citizens are voicing concerns over the privacy implications surrounding facial recognition technologies in particular: a December 2019 survey conducted by a Chinese think tank found that 80 percent of respondents had expressed such concerns.

Over the past month, awareness-raising efforts by privacy advocates have gained broader recognition and scored some legal victories. On November 20, a court in Hangzhou ordered a local wildlife park to delete facial-recognition data it had collected from a university professor without his consent, and pay him modest compensation. Guo Bing of Zhejiang University of Science and Technology had sued the Hangzhou Safari Park in November 2019 for infringing on his personal privacy by requiring visitors to scan their faces in order to gain entrance. Both the case and the ruling were the first of their kind in China. Amid growing public concern about data privacy, in late October, Hangzhou’s municipal government introduced a draft law banning the use of facial-recognition technology in residential areas. 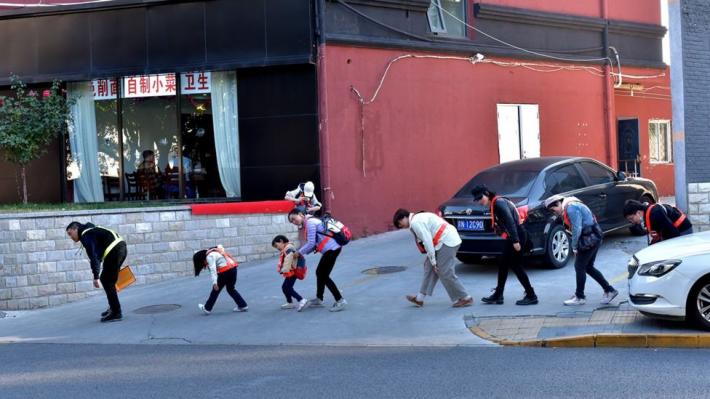 Meanwhile, Chinese performance artist Deng Yufeng has organized a tour of a circuitous 0.7-mile path in Beijing, guiding volunteers, including families with children, for two hours as they crouched, ducked, and used props to avoid being detected by the 89 security cameras identified along the carefully mapped route. Over the past month, the initiative gained attention in domestic and international media after Deng conducted a tour on October 24, which took months of research and preparation.