In this issue: Key trends and highlights from 2019 related to China’s global media influence, the CCP’s ideological push, investigative journalism, restrictions on artistic creativity, and surveillance in China and Hong Kong, as well as what to watch for in 2020.

Censored Oscars’ Shortlist
This image is taken from One Child Nation, a documentary film codirected by Nanfu Wang and Jialing Zhang that was shortlisted for an Academy Award under the Best Documentary Feature category. Chinese media reports mentioned only 14 of the 15 films shortlisted, omitting One Child Nation, which offers a critical perspective on the cost for Chinese families of the decades-long one-child policy. After Amazon Prime released the film November 8, a pirated version with Chinese subtitles went viral overnight on Sina Weibo, until censors stepped in within 24 hours. Online searches for the film title or the related hashtag in China generate no results. Credit: One Child Nation

ANALYSIS: The Globalization of China’s Media Controls: Key Trends from 2019

The Chinese Communist Party’s international media influence campaign is expanding rapidly—and so is the world’s response.

An official at the Chinese embassy in Moscow warns a local journalist to remove an article questioning the health of the Chinese economy from his paper’s website or face being “blacklisted” in China. Nepal’s state-owned news agency—which has a content-exchange agreement with Xinhua, its Chinese counterpart—launches an investigation into three reporters who circulated an item about the Dalai Lama, Tibet’s exiled spiritual leader. A regional public broadcaster in Germany airs a current affairs program that was coproduced with Chinese state television, prompting criticism. And Timor-Leste welcomes two Chinese companies to manage a digital television expansion project, even as broadcasters in Africa raise concerns about such companies’ outsized influence over which stations are available to viewers.

These are just a few incidents from the past year that illustrate increasingly aggressive efforts by the Chinese Communist Party (CCP) to project its propaganda and enforce its censorship priorities around the world. A new Freedom House report published last week—Beijing’s Global Megaphone—describes the full array of CCP media influence tactics, presenting evidence of both their growing impact and the pushback they have generated, whether from governments, independent media, technology firms, or civil society.

While the report tracks the evolution of the CCP strategy and its effects since 2017, the following four trends stood out in 2019:​ 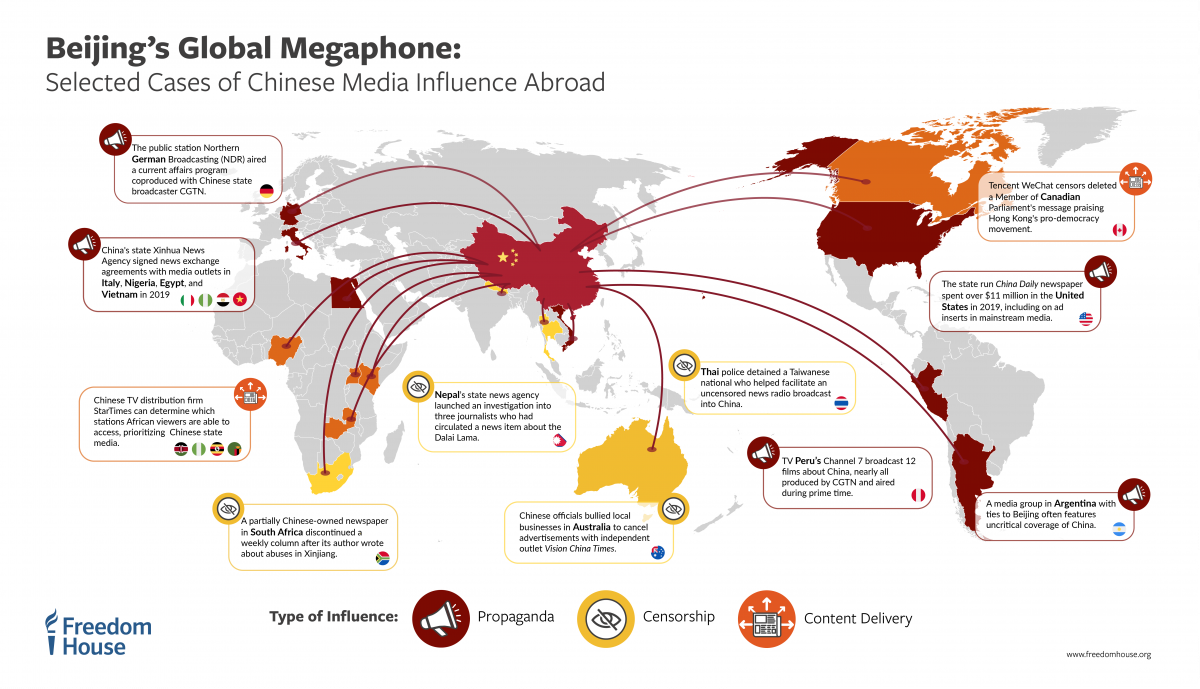 There are no indications that CCP leader Xi Jinping and his allies plan to slow their global media influence activities in 2020. In fact, they are likely to view the new pushback as a sign that they should redouble their efforts. That makes it all the more important for governments, journalists, technology firms, and civil society to take steps that will increase transparency and protect media freedom. Such measures will have the added benefit of strengthening democratic institutions against other domestic and international threats, which only seem to multiply from one year to the next.

Sarah Cook is a senior research analyst at Freedom House, director of its China Media Bulletin, and author of Beijing’s Global Megaphone: The Expansion of Chinese Communist Party Media Influence since 2017, published on January 16, 2020.

This article was also published in the Diplomat on January 21, 2020

The year 2019 saw the Chinese government increase its control over domestic media and online space. Authorities also made a more concerted effort to promote Chinese Communist Party (CCP) chief Xi Jinping’s persona and ideological priorities. This was noticeably reflected in online discourse in China, and the trend appears set to continue in 2020, particularly as new content-management regulations take effect in March.

Investigative journalism that squeezed through tightening controls in 2019

As China prepares to enter the Year of the Rat, the space for independent journalists continues to shrink. In December, the Committee to Protect Journalists (CPJ) announced that China was the world's leading jailer of journalists, with at least 48 imprisoned. While only a handful of those were arrested in 2019, figures indicating more arrests and long-term detentions reflect growing state intolerance of press freedom under Xi Jinping. According to researchers at Guangzhou’s Sun Yat-sen University, between 2011 and 2017, the number of investigative journalists in China declined by 58 percent, to 175. And over the last few years, many of China's most renowned investigative journalists, including Zhang Wenxin, Liu Wanyong and Ji Xuguang, have quit, been barred from writing, or fled the country.

Yet limited critical journalism has managed to survive. In their annual rundown on the best investigative journalism of 2019, the Global Investigative Journalism Network (GIJN) highlighted the work of numerous Chinese reporters who tackled sensitive issues in spite of state censorship. The list included articles on the following topics:

The Beijing-based Caixin, which reported three of the five articles GIJN drew attention to, is one of the only remaining financial news outlets in China with a robust investigative team.

Other investigative pieces came from newsrooms outside mainland China. Hong Kong-based Initium Media worked with the New York Times to report on the Chinese roots of the global fentanyl trade. And in some of the year's biggest China-related stories, the New York Times and the International Consortium of Investigative Journalists both published internal Chinese government documents detailing authorities’ detention and repression of ethnic-minority Muslims in Xinjiang.

Tightening political controls in 2019 affected not only traditional and online media but also artistic, literary, and entertainment content in China. The following are a few recent examples:

Analysis for 2019: The above examples reflect expanded efforts during the year to tighten restrictions on cultural content producers in China, even as the country continues to grow as an important international entertainment market. In 2020, China is expected to surpass the United States to become the world’s largest movie-theater market, with box-office revenue estimated to reach $12.28 billion. Domestically, however, increasing government censorship continues to hurt Chinese filmmakers, and a decrease in the number of television dramas approved by Chinese censors has left many television actors unemployed. As state restrictions tighten, theatrical troupes and performance artists whose work addresses sensitive topics have taken to organizing pop-up performances to avoid attracting the ire of government authorities.

Occasionally, cultural censorship attempts apparently at the behest of the Chinese government have extended overseas. On December 29, Norway Today reported that a delegation of Chinese skiers training for the 2022 Winter Olympics in the Norwegian town of Meråker requested that controversial Chinese books, including one about the banned Falun Gong spiritual group, be removed from a local library, a demand the library rejected.

CCP efforts to build up surveillance capabilities continued throughout 2019, with worrying consequences. However, online and offline efforts to counter the mass collection of personal data have accelerated, in tandem.

Analysis for 2019: These events reflect increasing state intrusion into personal and public spaces, as well as limited data protections for what is collected—but also growing pushback against domestic spying in China. Internationally, the country’s intention to become a global surveillance technology leader is clear: every submission to the UN's International Telecommunication Union concerning surveillance technology made over the last three years was from China. Yet international observers are not the only ones concerned about China’s domestic spying apparatus. According to the results of a survey conducted by Beijing-based Nandu Personal Information Protection Research Center in October and November 2019, nearly three-quarters of Chinese respondents expressed a preference for traditional ways of verifying their identity over the use of facial-recognition software. And as government surveillance increases, netizens have also taken to sharing tips on how to avoid state monitors both on and offline.

With the Hong Kong protest movement showing no signs of abating, concerns are growing about police-led data-collection programs targeting demonstrators. During a Legislative Council meeting on January 8, 2020, Hong Kong secretary for security John Lee revealed that between June and November 2019, Hong Kong police had seized 3,721 mobile phones from individuals suspected of participating in antigovernment protests. In response, opposition lawmaker Charles Mok, who represents the information technology sector, expressed concern about the large percentage of detained protesters targeted in this way, as well as possibility that police could be breaking into phones to collect data from them, or even installing spyware on confiscated devices before returning them. Government representatives have not clarified whether police have used spyware to unlock the phones of protesters.

Even before Secretary Lee's comments, concerns about police data collection were already being raised. In a Twitter thread posted on December 19, democracy activist Joshua Wong wrote that following his arrest on August 30, police had accessed text messages on his phone, even though he had never provided his phone's password nor had he been issued a warrant. Wong said he discovered the break-in when some of the messages were submitted by prosecutors as evidence in court. Police disputed Wong's account, claiming that they had obtained a warrant from a magistrate.

These revelations raise serious questions about the Hong Kong government's commitment to data privacy. Existing protections under the Personal Data (Privacy) Ordinance are vague and provide police with broad exemptions to access personal data for the purpose of “the prevention or detection of crime.” Additionally, worries about government surveillance extend beyond police confiscation of cell phones. Protesters have taken to wearing face masks out of fear that cameras may be equipped with facial-recognition software that could identify them to Hong Kong and mainland Chinese authorities.

It is not only the local government that has laid siege to the privacy rights of Hong Kong residents. Both pro- and antigovernment netizens have attacked their political opponents through doxing—the practice of researching personal information about an opponent and publishing it online as a retaliatory action. Doxing targets have included police officers, journalists, protesters, government employees, and people across the political spectrum. Personal details, including photos, home addresses, phone numbers and information on family members, have been released on websites, social media, and the encrypted messaging app Telegram. Since last June, the Office of the Privacy Commissioner for Personal Data has received more than 4,700 complaints about doxing.

In October, an injunction was granted by the city's High Court against the nonconsensual sharing of personal information of police and their families. Yet local laws and institutions thus far seem unable to effectively control the use of this tactic. In December, Privacy Commissioner for Personal Data Stephen Wong Kai-yi acknowledged doxing as a problem, and said his office was working with online platforms to remove “intimidating messages.” 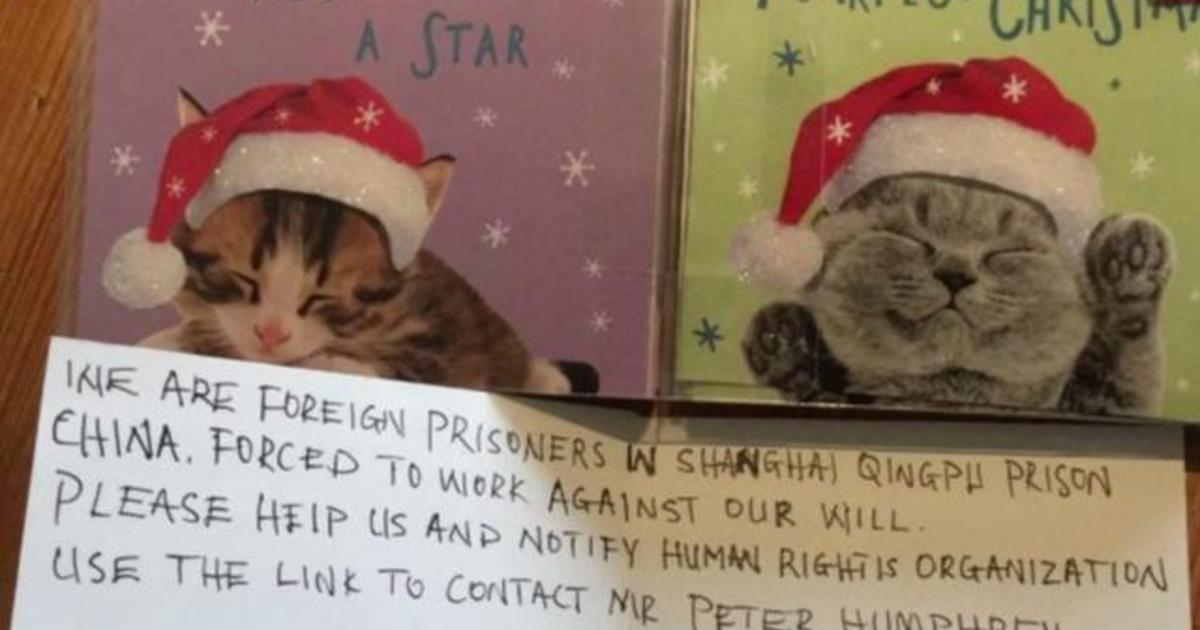 New and ongoing crackdowns against labor activists, human rights lawyers, and religious and ethnic minorities further inhibited government criticism, information sharing, and grassroots activism in 2019. At the close of the year—as Chinese authorities likely suspected many international observers were distracted by the Christmas holiday—security agents engaged in a detention and interrogation spree against activists, including a group who attended a private dinner in early December at which they debated the prospects of a democratic transition in China.

But amid these and other restrictions, initiatives by Chinese citizens to protect basic freedom, share news, and access vital information persist. Throughout 2019, the China Media Bulletin has highlighted in this section risky endeavors like journalists reporting assertively at high-profile political gatherings, software engineers protesting on the unblocked GitHub site, smuggled videos of camps in Xinjiang and Falun Gong practitioner deaths in custody reaching the outside world, Uighurs using video-sharing apps to break through censorship, and Chinese netizens deploying wordplay to express support for Hong Kong protesters. Other examples that emerged during the year include:

Meanwhile, in the face of tightening censorship and despite a growing crackdown on virtual private networks (VPNs) used to reach blocked websites, millions of Chinese people each month continue to jump the so-called Great Firewall using these tools. Indeed, marketing firms like GlobalWebIndex and Hootsuite reported estimates that 31 to 35 percent of Chinese web users utilized a VPN in 2019. If accurate across China’s 800 million internet users, that would amount to some 250 million people.

Photo caption: A message written by a foreigner held in a Chinese prison that was found in Britain inside a Christmas card.