In this issue: Beijing has avoided accountability for its atrocities against Uyghurs so far, but it remains vulnerable to democratic pushback. The historic 20th Party Congress opened in Beijing alongside propaganda, censorship, intimidation, and a public act of dissent. Meanwhile, the CCP’s transnational repression has become more brazen with UK consulate attack on protesters.

Image of the month: The emperor’s new clothes

On October 16, a group of protesters gathered outside China’s consulate in Manchester, England, as the CCP’s 20th Party Congress opened in Beijing—an event during which Xi Jinping is expected to be made the most powerful Chinese leader since Mao Zedong. The protesters displayed a large banner of this image, depicting Xi wearing only underwear and a crown and holding in his arms likenesses of Taiwan, and bloodied Ukraine and Hong Kong; yet, he sees himself in the mirror in fine clothing and as “representing 1.4 billion Chinese people.” The staff at the consulate attacked the protesters, reportedly dragging one man onto the consulate grounds and beating him. A spokesperson later attempted to justify the assault, saying the protesters had "hung an insulting portrait of the Chinese president at the main entrance.” Source: Kris Cheng, Twitter.

How Long Can Beijing Avoid Accountability for Its Abuses in Xinjiang?

A new report on the regime’s global media influence suggests that it remains vulnerable to democratic pushback.

The Chinese government won an important victory at the UN Human Rights Council on October 6, using its political and economic influence to defeat a motion that called for debate on the human rights situation in Xinjiang. The motion failed by a margin of two votes, ensuring a smooth opening for the Chinese Communist Party’s 20th Congress on October 16.

While the result ensured that the council would not examine a damning report by the former UN high commissioner for human rights, it did little to suppress the broader circulation of information about Beijing’s persecution of Uyghurs and members of other Muslim minority groups.

To further shield itself from accountability for the atrocities being committed in Xinjiang, the Chinese Communist Party (CCP) has worked vigorously to reshape media narratives around the world. A Freedom House report published last month, Beijing’s Global Media Influence: Authoritarian Expansion and the Power of Democratic Resilience (BGMI), assessed such efforts in 30 different countries. We found that Beijing is deploying considerable resources to counter criticism and boost its image abroad, and that it has gained traction in some areas. But there were also many cases in which its campaigns backfired or encountered notable resistance from local journalists, activists, and governments, raising questions about the durability of the CCP’s strategy.

An array of tactics to spread favored narratives

Beijing’s efforts to influence media coverage of its human rights violations in Xinjiang include disseminating propaganda through traditional channels like Chinese state media and its diplomats’ social media accounts, but it has also adopted more covert and coercive tactics, including the laundering of its propaganda through more credible local outlets.

Coverage of Xinjiang is a major component of the CCP’s media influence campaign in Indonesia, home to the world’s largest population of Muslims. A significant amount of Chinese state-produced content about Uyghurs is published in the country through content-sharing or cooperation agreements. For example, the Indonesian state news agency Antara has a content-sharing agreement with Xinhua, its Chinese counterpart, and its content is regularly republished by other outlets. The Chinese embassy in Indonesia has also subsidized or organized paid trips to Xinjiang and other parts of China for reporters from major national and Muslim media outlets, as well as for members of local Islamic groups, some of whom returned home and repeated CCP narratives. Coming from Indonesian journalists or Islamic scholars, such narratives may have resonated more with local audiences.

In Malaysia, another country with a large Muslim population, Chinese state actors have similarly used targeted influence tactics to shape coverage about Xinjiang. The Star, a popular English-language newspaper, republishes Xinhua and China Daily content and has adopted an editorial line that backs the Chinese government’s policies in Xinjiang. The paper’s largest shareholder is the Malaysian Chinese Association, which has signed a memorandum of understanding with the CCP. Over the past several years, a number of Malaysian journalists participated in trips to Xinjiang organized by the Chinese authorities and later wrote positive articles about government policies toward Muslims in China.

In Ghana, Senegal, and Tunisia, the Chinese embassies have held press conferences for local journalists since 2019 to spread false or misleading information about the situation in Xinjiang, which was uncritically republished by some Ghanaian and Senegalese outlets.

In Kenya and South Africa, China Radio International employed African journalists in China to produce Xinjiang “diaries” and “journals” in Kiswahili and English, which were then disseminated in east and southern Africa to whitewash human rights abuses. Our report also found that international vloggers from the United Kingdom, Israel, and other countries were paid or otherwise used to promote CCP messaging on Xinjiang.

In France in March 2021, the state broadcaster China Global Television Network published an article by a French journalist identified as “Laurène Beaumond,” who allegedly lived in China and visited Xinjiang several times. The piece was a glowing endorsement of the CCP’s crackdown in the region. Journalists later discovered that the article was written by a former French presenter for China Central Television under a pseudonym that has not been used since. In this instance, the effort largely backfired by generating significant media discussion about its dubious authenticity.

More coercive tactics employed by CCP-linked actors to manipulate global public opinion about Xinjiang include cyberbullying or trolling to suppress criticism and launching coordinated campaigns of inauthentic social media posts to drown out critics or create a false show of support. In Australia, researcher Vicky Xiuzhong Xu suffered from cyberbullying by nationalist Chinese users after she published a report about forced labor among Uyghurs in Xinjiang.

As the close vote at the UN Human Rights Council suggested, there are limits to the effectiveness of Beijing’s influence efforts. The BGMI report found that while some political leaders are willing to cater to the CCP’s interests, independent news outlets and civil society play a crucial role in pushing back against the Chinese government’s media manipulation, including on its rights abuses in Xinjiang. This nongovernmental resistance in turn can help build up public pressure that compels governments to hold Beijing accountable for its abuses.

For example, although the government in Senegal has close relations with Beijing, the population is 95 percent Muslim, and the media have reported on public expressions of solidarity with Uyghurs. In Kenya, the independent Media Council publicly rebuked the public broadcaster Kenya Broadcasting Corporation for republishing Chinese government propaganda about Xinjiang. More recent efforts to directly disseminate the Chinese government’s response to the human rights commissioner’s report in Ghana have failed to gain traction on social media.

Indonesian media have critically covered Uyghur issues, and there have been several protests in front of the Chinese embassy in Jakarta. Many Muslim intellectuals in Malaysia reacted angrily to a 2019 campaign by China’s ambassador, who authored several op-eds denouncing “Western reports” about rights abuses in Xinjiang. A coalition of Muslim civil society groups wrote to the Indonesian and Malaysian foreign ministries ahead of the Human Rights Council vote this month, calling on them to support the motion for a debate.

Ultimately, seven of the countries examined in the BGMI report abstained or voted with Beijing at the UN Human Rights Council. Five of them—Argentina, Indonesia, Malaysia, Mexico, and Senegal—were assessed as being “vulnerable” to the CCP's media influence efforts. The remaining two, Brazil and India, were both rated “resilient” by Freedom House, though their governments chose to abstain.

While the Chinese government succeeded in Geneva this time, global support for the fundamental rights of Uyghurs and other Muslims in Xinjiang is growing, as evidenced by statements from other UN experts and the “yes” votes from countries like Somalia, Honduras, Paraguay, Japan, and South Korea.

Journalists and activists in the countries that voted “no” or abstained should continue to push back on CCP media influence and encourage their governments to defend freedom and human rights at home and abroad. Our research clearly indicates that Beijing’s pressure campaigns can be blunted by robust democratic societies. This was the first vote on China at the Human Rights Council, but it need not be the last.

Angeli Datt is a senior research analyst for China, Hong Kong, and Taiwan at Freedom House and a coauthor of Beijing’s Global Media Influence: Authoritarian Expansion and the Power of Democratic Resilience. This article was also published in the Diplomat on October 20, 2022.

On September 8, Freedom House published a special report titled Beijing’s Global Media Influence: Authoritarian Expansion and the Power of Democratic Resilience. In addition to the items below, please see our report for new analysis of how Beijing seeks to influence media around the world, and how journalists, lawyers, lawmakers, and civil society sectors have responded. The report also includes 30 in-depth country cases studies on CCP efforts to influence information landscapes, and countries’ resilience.

No covid test, we want to eat. Remove dictator and national traitor Xi Jinping. On October 13, a Beijing man lowered two banners over a city bridge, shouted slogans, and lit a fire in protest of the government’s COVID-19 policies, and demanded freedom and dignity for Chinese people. Occurring days before the CCP’s all-important Party Congress opened on October 16, the “Bridge Man” protest was an act of defiance in a country suffering for months under Xi’s unyielding “zero-covid” policies, as their architect was set to be anointed with another term.

The demonstration drew attention on social media, which was met with rapid censorship and the deployment of police and minders across the capital. It was not the only public act of dissent against Xi’s covid policies. A forthcoming Freedom House project, the China Dissent Monitor, documented 37 cases of Chinese citizens protesting COVID-19 restrictions between June and September 2022. They include a protest that drew hundreds of people to the streets, and online hashtag movements featuring hundreds of thousands of posts. 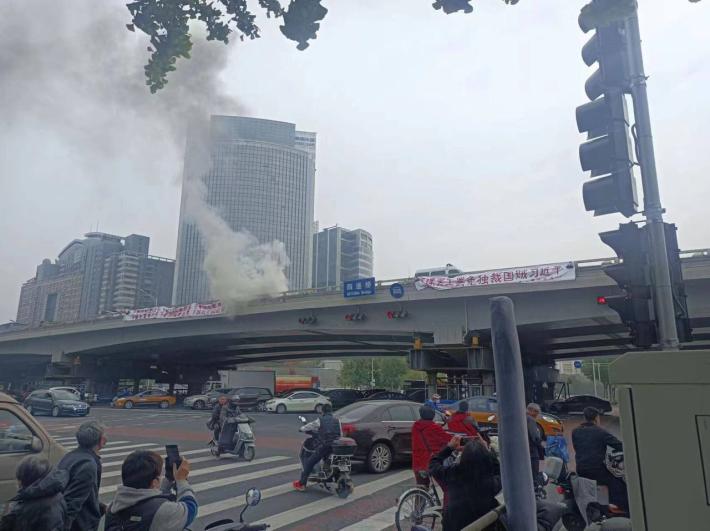 Bridge Man’s banners hung on the Sitong Bridge in Beijing read: (left) “No Covid test, we want to eat. No restrictions, we want freedom. No lies, we want dignity. No Cultural Revolution, we want reform. No leaders, we want votes. By not being slaves, we can be citizens;” and (right) “Go on strike at school and work, remove dictator and national traitor Xi Jinping.” (Source: Twitter)

Bridge Man’s protest also prompted expressions of solidarity in China and internationally. In Shanghai, retired teacher Gu Guoping retweeted photos and videos before police seized him on October 16. He is now missing. An activist in Henan, Wang Wei, has also reportedly been detained after expressing support for Bridge Man. On university campuses around the world, including the United States, United Kingdom, Europe, Hong Kong, and Australia, Chinese and other students have hung signs with the slogans he used and similarly denounced Xi Jinping. Bridge Man’s fate is unclear, and he will likely face harsh reprisals. However, his protest and its offshoots show that Xi does not enjoy the universal support he publicly claims that he’s secured.

What to Watch For: