In this issue: What the 19th Party Congress means for China’s media policy at home and abroad, latest surveillance and censorship innovations, and how Beijing’s investments are shaping African media.

Viral clapping: On October 18, the day the 19th Communist Party Congress opened, a Sina Weibo user posted this image—of an advertisement for a new mobile phone application that encourages citizens to compete in how quickly they can clap at excerpts from President Xi Jinping’s speech. The user expressed wonder at the new app, writing, “Can’t express my feelings, hands swollen from clapping. Everyone, come feel it! Best new media product this year.” Although the user had only a modest following of 56,295, the post quickly went viral. It was shared 10,827 times within less than seven hours before 1:06 a.m. on October 19, when censors who recognized the apparent sarcasm deleted the post. Credit: Weiboscope.

Since the 19th Party Congress unfolded in Beijing last month, observers have closely examined various aspects of Xi Jinping’s lengthy speech, the new members of the Politburo Standing Committee, and the extraordinary security measures put in place for the event. Far less attention has been paid to the congress’s implications for media policy.

Xi’s remarks, related changes to the party constitution, and key personnel decisions reveal a number of notable shifts that could have a profound impact on how the Chinese Communist Party (CCP) manages its massive censorship and propaganda apparatus.

Four developments at the congress stand out for their departure from precedent:

Xi also reiterated strategies of information control that he has promoted before, and which have set his approach apart from that of his predecessors. Xi is especially attuned to the power of the internet and social media. As in past speeches, on October 18 he emphasized the importance of innovation and of enhancing the popular appeal of party propaganda and state media content, both at home and internationally.

Taken together, these aspects of the 19th Party Congress suggest that the regime will intensify and modernize its efforts to control not just the behavior but the minds of the Chinese people.

For example, the exaltation of “the party’s leadership” and “Xi Jinping Thought” signals a heightened intolerance for criticism of CCP rule and of Xi personally. Similarly, the emphasis on culture indicates that the party will be even more aggressive in promoting official viewpoints in the entertainment industry and educational system. Textbooks are already being revised to include Xi’s “Thought on Socialism with Chinese Characteristics in the New Era,” and new research centers are being established at select universities.

In addition, the CCP will likely explore new ways to compel the online community to police itself. At one point in the speech, Xi mentions the need to “implement the system of responsibility for ideological work,” a phrase that has traditionally implied deploying citizens to monitor one another. Regulations related to the new Cybersecurity Law that entered into force in June include provisions to encourage self-censorship. Just last week, the CAC issued new rules that require social media and news applications to conduct regular self-assessments to ensure they are not hosting any undesirable content.

Some observers have interpreted Wang’s early writings as having a somewhat liberal bent. However, at least one acquaintance told reporters that Wang “doesn’t believe China should become a multiparty democracy or have division of powers.” As long as he serves the interests of the one-party state and his close ally Xi, his apparent familiarity with liberal ideas may simply make him a more canny manager of China’s information landscape, which offers an illusion of choice, dynamism, and diversity but remains intensely hostile to independent reporting and open debate.

As disturbing as these domestic concerns may be, Xi’s affirmation of CCP governance as a model for other developing countries should raise alarms beyond China’s borders.

For years now, China has been assisting partner governments in Africa, Latin America, and elsewhere by offering training to journalists at state-owned media, upgrading their broadcasting equipment, and selling telecommunication technologies that enable surveillance and censorship. Regimes in countries like Iran, Russia, and Ethiopia have tried imitating certain aspects of China’s internet controls, for example by promoting domestic social media platforms and restricting international competitors.

Should the CCP now promote its own information strategies more aggressively in the developing world, at a time when democratic powers seem to be in retreat, the negative impact on free expression and political pluralism could increase dramatically.

Sarah Cook is a senior research analyst for East Asia at Freedom House and director of its China Media Bulletin. This article was also published by the Diplomat on November 4, 2017.

As Beijing geared up for the 19th Chinese Communist Party Congress, which was held October 18–24, the capital went on lockdown. Many of the controls were familiar to residents who had witnessed previous high-profile events: restrictions on sales of scissors and knives, blocks on virtual private networks (VPNs), harsher-than-normal treatment of petitioners, and forced “vacations” for dissidents and activists. Other measures took even Beijingers—and foreign correspondents based in the capital—by surprise, including some that had a nationwide impact:

The 19th Party Congress marked President Xi Jinping’s self-coronation as the leader of a “new era” in China. He opened the congress on October 18 with a three-and-a-half-hour speech titled “Secure a Decisive Victory in Building a Moderately Prosperous Society in All Respects and Strive for the Great Success of Socialism with Chinese Characteristics for a New Era.” His lengthy remarks were broadcast live across the country, and local party branches from Public Security Bureaus to kindergartens held watch parties. Only Xiamen Satellite TV stuck to its regularly scheduled programming, a Minnan-language cartoon. (The station eventually stopped the show and put up a notice of technical difficulties, and later played Xi’s speech.)

Xi Jinping’s “Thought on Socialism with Chinese Characteristics for a New Era” was splashed across the front page of the next day’s People’s Daily and other papers around the country, with many featuring a photo of Xi that was several times larger than those of the other members of the new Politburo Standing Committee, a departure from more balanced visual displays following past congresses. Xinhua News Agency and other news websites also featured the speech. On October 18, Tencent released the app “Clap for Xi Jinping,” in which players try to clap as much as possible within 18 seconds after each soundbite from Xi’s speech, then share their results online. Within hours it had reportedly amassed 400 million players. At the close of the congress, a campaign on the social media site Sina Weibo to #SupporttheNewEra (#为新时代打) immediately followed the addition of Xi’s ideological contribution to the party constitution. Celebrities posted short videos to promote the slogan and got millions of hits—though many user comments were shout-outs to the celebrities, not the ideology.

Xi Jinping Thought will “go into textbooks, into classes, and into the brains” of students as part of the national curriculum, Education Minister Chen Baosheng said on October 23. New textbooks are being prepared, according to a source quoted in the South China Morning Post. Universities will also establish study centers for Xi Jinping Thought—two have already opened at Renmin University and Tianjin University of Finance and Economics.

Amid the social media campaigns and academic initiatives, an old-school propaganda tool is also being revived to spread Xi’s message. Loudspeakers, common across China during the Cultural Revolution, are a new fixture in Nanmiao, Hebei Province, a model village for embedding party ideology into everyday life. Zhang Lifan, a historian at the Chinese Academy of Social Sciences, says bringing back the loudspeaker system “means the party wants to impose its own will on people, no matter if they want to listen or not.” 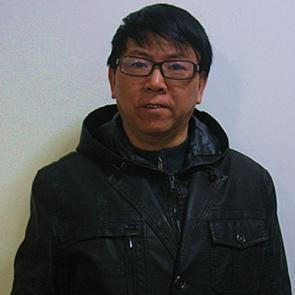 Lü is a veteran democracy advocate and freelance writer from Hangzhou in Zhejiang Province. Security agents detained him on July 7, 2014. After nearly two years in detention, on June 14, 2016, a Hangzhou court sentenced him to 11 years in prison on charges of subverting state power.

As evidence, the court verdict cites 11 articles published on various overseas websites that are critical of the Chinese government, such as Boxun, the Epoch Times, and Canyu. Among the articles are an analysis of the scandal surrounding purged Chongqing party secretary Bo Xilai, and critiques of the detention or sentencing of several fellow activists and writers. The verdict also notes that Lü had tried to revive a branch of the China Democracy Party in Zhejiang, with himself as the chair. The decision points to 90 greeting cards he had prepared to send to various people on the branch’s behalf in January 2014, possibly for Chinese New Year.

Prior to this especially harsh sentence, Lü had already been imprisoned for four years over earlier essays he had published on foreign websites, and was released on August 23, 2011. Before that stint in prison, Lü had published a book in 2000 on corruption in the Communist Party and an article on the party’s powerful political and legal committee in Beijing Spring, an overseas democracy magazine.

Lü appealed the initial verdict in his latest case, but on November 1, 2016, the Zhejiang People’s High Court confirmed the conviction and sentence. He is now being held at Changhu Prison in Huzhou, Zhejiang Province. He reportedly suffers from high blood pressure and diabetes.

WHAT TO WATCH FOR

Trump visit to China: U.S. president Donald Trump will make his first visit to China since taking office from November 8 to November 10. Watch for how state media cover his trip—including any tweets he happens to send out about the visit and meetings with Chinese president Xi Jinping. Also watch for whether Trump raises any U.S. concerns regarding the growing restrictions on media and internet freedom in China, including those that negatively affect U.S. businesses and news outlets.

Implementing the 19th Party Congress vision: Watch for how the propaganda, censorship, and cybersecurity apparatus responds to the guidance issued by Xi and the changes to the party constitution during the 19th Party Congress, including in the areas of education, entertainment, and foreign policy. Also watch for whether Wang Huning takes over the ideology portfolio as predicted, and how he adapts to his new position, especially in relations with the Central Propaganda Department.

Eased controls after 19th Party Congress: Several of the restrictive measures implemented in recent months are likely to have long-lasting effects, but some others have been explicitly designated as temporary by Chinese authorities. Watch for whether activists sent on “vacation” are permitted to return to Beijing, restrictions on Airbnb and WeChat profile edits are lifted, and internet speeds return to normal.