As COVID-19 Threatens Turkey, Erdoğan’s Authoritarian Playbook May Undermine His Own Rule

While the government hesitated to confront the deadly coronavirus directly, a crackdown on the opposition continued. With a lock on executive power and a reckless go-it-alone attitude, Erdoğan may have trouble dodging the blame when the coming economic crisis hits. 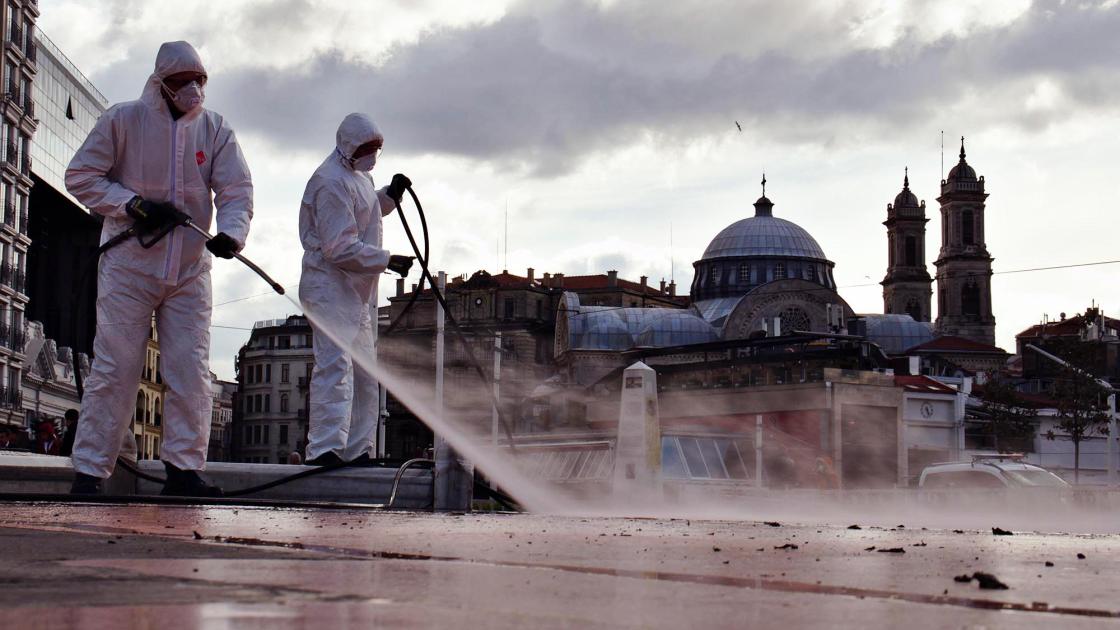 Two municipal workers in Istanbul spray disinfectant onto the streets in effort to mitigate the spread of the coronavirus. Editorial credit: Mahmut D / Shutterstock.com.

Turkey’s government entered 2020 beset on all sides by crises of its own making. After years of threatening its allies and pursuing a rebalancing away from the European Union and NATO, the government had isolated itself from traditional allies. Its slow-motion defeat in Syria continued to limp to a conclusion, with Russia and the Assad regime assaulting the last opposition bastion in Idlib and threatening to push millions more refugees across Turkey’s borders. The economy was walking an ever-narrowing path, as the government attempted to steer its way out of a currency collapse in 2018 by forcing banks to give credit, and avoiding reforms that would deepen but shorten the suffering. Due to the economic travails and the burden of hosting millions of refugees from Syria, in the most important elections of 2019, President Recep Tayyip Erdoğan’s Justice and Development Party (AKP) suffered a resounding defeat, losing the country’s major cities to opposition candidates. Smelling blood, even usually cautious defectors from the AKP formed new parties and began positioning to challenge Erdoğan’s grip on power, even as authorities pressed forward with their years-long assault on political and civil opposition.

Then the coronavirus crisis hit. Like most countries around the world—including my own—Turkey was slow to respond to the pandemic. Wishful thinking prevailed over sober reason. Travel and tourism accounts for more than 10 percent of Turkey’s economy; in 2019 the government opened a $12 billion airport outside Istanbul intended to rival the world’s great hubs of aviation. The government was perhaps understandably reluctant to disrupt such an important sector by imposing restrictions, but the result was that flights continued even from Iran, which had one of the worst early outbreaks, until February 23.

As it became clear that not only travel restrictions but also more extreme forms of social distancing would be required, the government continued to hesitate long after the country’s first case was officially confirmed on March 11. A weekend quarantine was announced for Turkey’s largest cities only in the evening of Friday, April 10; with only two hours’ notice before the quarantine was to begin, city-dwellers rushed into the streets in panic to buy any goods they might need before being confined, creating crowding conditions all over the country. Even now, seven weeks after Turkey’s first case, the government is trying to keep enforced social distancing limited to weekends in the 30 most populous provinces, although the most recent one lasted for a four-day holiday weekend, from April 23-27. With millions of Turkish citizens engaged in agricultural and day labor, a longer lockdown may simply be economically untenable.

The results are grim. Given what we are learning now about unmarked community spread of the virus elsewhere, it seems implausible the virus was not already present inside Turkey long before March 11. According to official figures, Turkey now has 110,130 cases and 2,805 deaths. As in many other countries —including, again, my own—these are undoubtedly significant undercounts.

No pause in repression, as virus spreads

Even once the virus was confirmed to have arrived, authorities unfortunately but unsurprisingly continued defining their approach to governance through the twin pillars of a paranoid assault on opposition, and rejection of international support.

The consolidation of Erdoğan’s control of the AKP and Turkey’s state has been characterized by a paranoid drive to crush political and civic opposition, including by repeatedly accusing activists and others of terrorism and separatism. Even before the coup attempt of July 2016, the government had begun arresting social media users by the hundreds, expropriating media outlets, and imprisoning journalists left, right, and center. The leader of the third-most popular party in the country, Selahattin Demirtaş, has been in prison since November 2016; civil society leader Osman Kavala has been held in pretrial detention, convicted of no crime, for more than 900 days.

The response to the virus has been no different. An amnesty bill passed to relieve overcrowding in the country’s prisons in the face of the virus pointedly omitted the release of tens of thousands of people imprisoned on arbitrary and vague antiterrorism charges. Hundreds of social media users have been investigated and detained since the crisis began, and new prosecutions have been opened against journalists. When the mayors of opposition municipalities announced a donation drive to raise money to fight the virus, the government accused them of attempting to form “a state within a state.” Istanbul’s mayor has said he and the mayor of Ankara have already been placed under investigation.

Internationally and domestically, the government’s slogan—#BizBizeYeteriz, or #WeAreAllWeNeed—underscores the theme of nationalist self-reliance. Official and semiofficial outlets are filled with stories of Turkey making its own ventilators, stockpiling its own medicines, and modeling best practices for the rest of the world while sending assistance to less fortunate countries, like the United Kingdom. Erdoğan personally rejected International Monetary Fund (IMF) assistance in a speech last week, even as the IMF has been providing money around the world with lighter conditions than usual due to the crisis.

Just as for the whole world, however, the real test is only beginning. The coming economic crisis will not spare Turkey. Certain factors that have benefited Turkey in years past, like low oil prices and low interest rates in the United States and Europe, could still provide some relief. But the unprecedented global and local consumption shock taking place, the disappearance of tourism for the crucial summer season, and restrictions on internal and international mobility will certainly overwhelm these, and quickly. The IMF’s conservative global model last week put Turkey’s 2020 growth at −5 percent, with inflation at 12 percent and unemployment at 17.2. Considering the desperation with which Erdoğan has pushed his government to avoid negative growth, and considering the serious political shock that came from the short recession of 2018­–19, this now becomes the most serious test he has ever faced.

The irony of Erdoğan’s successful drive to consolidate power in his presidency is that just as he has eliminated anyone else who would take the credit, so has he eliminated anyone else who could take the blame. After the fiasco of the first weekend quarantine announcement, Interior Minister Süleyman Soylu announced his resignation, only to have Erdoğan reject it and call him back to duty. The pas de deux was undoubtedly part of a factional power play within the government, but it also underscored how Erdoğan’s rule requires never admitting weakness, even when the failure is apparent for all to see. Now this authority will be tested against a foe that cannot be bullied, or censored, or imprisoned. And the lives of an entire country hang in the balance.

Beijing Covered Up COVID-19 Once. It Could Happen Again.