Freedom House implements the multi-year Mobilizing Civil Society to Support Judicial Integrity in the Republic of Moldova project, which is funded by the U.S. Department of State’s Bureau of International Narcotics and Law Enforcement Affairs (INL).  This project aims to support justice sector reform in Moldova by creating an environment in which the public is better informed about ongoing developments in the country’s justice sector and how they impact citizens’ daily lives. Through collaboration with local organizations, Freedom House engages civil society in promoting justice sector reform, educates the public about past reforms and future opportunities, and creates avenues for civil society and the public to galvanize government actors to discuss important issues in the judicial system.

REPORT ON MONITORING THE SELECTIVITY OF CRIMINAL JUSTICE 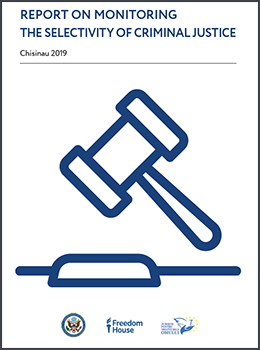 According to Freedom House’s (FH) 2019 Freedom in the World report on Moldova, “Moldova’s judicial branch is susceptible to political pressures that hamper its independence” and “due process is often lacking in the Moldovan justice system.” Responding to these issues, FH partner Lawyers for Human Rights (LHR) developed a unique methodology to monitor key criminal cases involving high-profile political figures, building a base of evidence and documentation that sheds new insight on the phenomenon of selective justice in Moldova. Utilizing this methodology, four regional teams of lawyers and journalists conducted monitoring of 14 target cases from January to August 2019, closely tracking and analyzing the developments of Moldova’s most high-profile and consequential selective justice cases as they unfolded across the country. The teams were deployed to Chisinau (2), Balti, and Comrat.

Based on this effort, LHR produced a comprehensive report analyzing the results of the monitoring, bolstering evidence that demonstrates the extent to which selective justices stymies Moldova’s democratic development. The report offers a number of detailed recommendations to political parties, law enforcement bodies, and representatives of the judiciary to reduce the practice of selective justice and increase transparency of Moldova’s justice sector. The report was launched in Chisinau, Moldova on November 6, 2019 at a high-level policy roundtable held at the National Institute of Justice.

UNCAC Shadow Report: Measures for Corruption Prevention and Asset Recovery in the Republic of Moldova 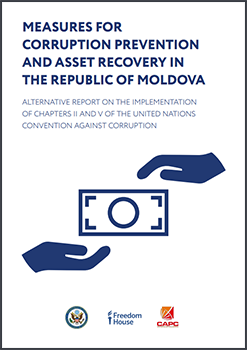 Moldova is currently under evaluation by the UN Convention Against Corruption (UNCAC), a process led by the Russian Federation and Palestine.  Moldova’s National Anticorruption Center and UNDP have already submitted their reports for the two-country review panel.  Moldova’s civil society also had the opportunity to submit a shadow report on the key issues facing Moldova in its fight against corruption, including in the justice sector.

To this end, Freedom House, in collaboration with subject matter experts from its partner organization, the Center for Analysis and Prevention of Corruption (CAPC), produced a shadow report providing an alternative analysis of Moldova’s performance on Chapters II (prevention measures) and IV (asset recovery) of UNCAC, which are the subject of the ongoing second review cycle.   The report, titled Measures for Corruption Prevention and Asset Recovery in the Republic of Moldova provides a detailed assessment of the regulation, adoption and enforcement of UNCAC norms that builds on the conclusions and analysis of prior reports. 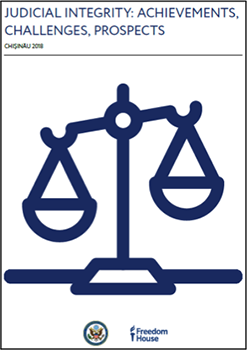 Freedom House, in collaboration with subject matter experts from the civil society organizations Center for Investigative Journalism (CIJM) and Center for Analysis and Prevention of Corruption (CAPC), produced a shadow report on the state of justice sector reform implementation in Moldova.  The report, titled Judicial Integrity: Achievements, Challenges, Prospects, is the product of discussions, consultations, and research regarding the Justice Sector Reform Strategy, an initiative that spanned from 2011 to 2016.

The report identifies implementation gaps in justice sector reform due to a lack of trust and transparent engagement between the justice sector and the media; an overreliance on frequent legislative or procedural modifications, which contribute to operational complexity; and a lack of political will in implementing initiatives. The assessment includes recommendations designed to enhance future judiciary reform efforts in Moldova, such as those outlined in the new Justice Sector Development Strategy (2018-2021).

EMPOWERING THE NEXT GENERATION OF LEGAL PROFESSIONALS

Freedom House partner INVENTO holds regular roundtables and other events designed to serve as informal spaces for the community of young lawyers in Moldova to communicate, build relationships and learn about new opportunities for mutual cooperation.  Through the “Justice Marathon” mini-grants program, INVENTO also supports local initiatives that take innovative approaches to solving justice sector issues. With INVENTO’s support, one mini-grant awardee formally registered as an NGO – the Public Association “Action for Justice” – that formalizes an existing group of over 50 young law specialists in Moldova.

Freedom House partner Center for Investigative Journalism (CIJM) facilitates regular press clubs that convene government officials from the justice sector, independent journalists, and civil society in order to foster meaningful engagement between these stakeholders. Participants discuss various challenges associated with the justice sector in Moldova, including that of building trust and transparency between stakeholders. Recordings of recent sessions (in Romanian) are accessible via the below links. 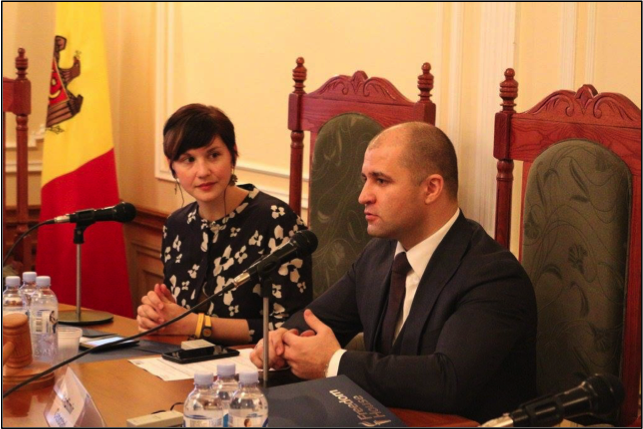 “Democracy and press freedom in Moldova, in regional and international context: discussion with Freedom House experts.” (May 2019) (Part 1/1)

“Former anticorruption prosecutor Viorel Morari to speak for the first time about the reasons for his resignation.” (June 2019) (Part 1/1)

Freedom House partner Center for Investigative Journalism (CIJM) educates and mentors journalists to improve their capacity to report and analyze challenges facing the justice sector. Through a training and mentorship program and support for investigative reporting, CIJM's network of journalists has shed light on some key issues, including the connections between kinship, friendship, and nepotism in the justice sector; judges' low salaries and their major debt to the judicial system due to issues in the system; and legal abuse facing people with psycho-social disabilities. Two recently published journalistic investigations (in Romanian) are available below.

Who Are the Magistrates ‘Removed From Exercising Administrative Functions?'
by Mariana Colun
June 27, 2019

How Do Anti-Corruption Prosecutors Live? ‘Modestly’ and From Donations
by Julieta Savitchiv
June 7, 2019

How Justice is (Not) Served for People with Psychosocial Disabilities
Mariana Colun and Natalia Porubin
January 24, 2018

CIJM's team of journalists also manages an interactive “Judicial Corruption Map” where citizens may report on instances of corruption throughout Moldova. CIJM's team investigates these complaints and produces in-depth articles on their findings.

Freedom House partner Ziarul de Garda also raises the profile of the issue of selective justice by producing and distributing print and online multimedia products throughout Moldova’s regions. Ziarul de Garda’s publications are distributed in both Romanian and Russian languages, serving as a vital source of information on justice sector issues for Moldova’s Russian-speaking population.

The competition for the inaugural round of “Justice First” policy brief authors is now open. To learn more about how to apply, please click here.