Freedom House is a proud partner of Internews in implementing the multi-year MEDIA-M project, funded by the United States Agency for International Development (USAID) and UK Aid.

Freedom House is a proud partner of Internews in implementing the multi-year Media Enabling Democracy, Inclusion and Accountability in Moldova (MEDIA-M) project, funded by the United States Agency for International Development (USAID) and UK Aid. Through collaboration with partner civil society organizations in the country, Freedom House aims to boost capacity in civil society to effectively monitor media and to improve the legal and regulatory environment for independent media. Freedom House’s activities address objective 2, which strives to build consumer understanding of independent, reliable, and high quality news, and objective 3, which intends to foster a regulatory environment in which independent media and media support organizations can thrive.

Freedom of Expression and the Geopolitical Stalemate: Defending Digital Spaces in the Republic of Moldova 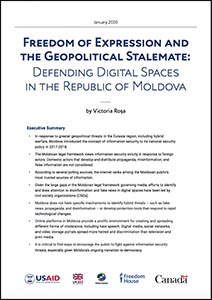 Moldova, like its neighbors in the region, faces challenges and threats to its national security due to the pervasive nature of media and information manipulation instigated by both internal and external actors. This challenge is particularly acute in digital spaces, where misinformation and polarized debate fomented by trolls and other impersonators seriously undercut the security and integrity of the public’s access to objective information. This toxic informational environment also fosters high levels of hate speech.

This policy brief by local expert Victoria Rosa examines the trends and proliferation of freedom of expression online in Moldova, as well as the most acute challenges and threats, with an emphasis on information security. The brief examines the current legislative framework governing information security in Moldova, as well as the important efforts by civil society organizations (CSOs) to identify and draw attention to disinformation and fake news in the country’s digital space. It concludes with targeted recommendations for government, civil society, and the media community. 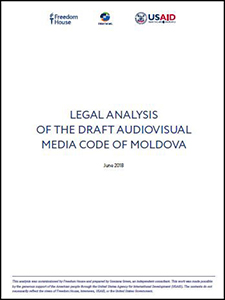 Freedom House engages top international experts to provide analysis and support to ensure that Moldovan frameworks uphold the highest standards for freedom of expression. Freedom House’s Local Representative, Tatiana Puiu, co-chaired the Parliamentary Working Group on audiovisual legislation, which concluded activities in December 2019. The working group contributed to several pieces of legislation that have passed into law, including the National Concept of Media Development, the Law on Attracting Investment for Film and Other Audiovisual Works Production, the Audiovisual Media Services Code and the Information Security Concept.

Freedom House partner Lawyers for Human Rights (LHR) defends freedom of access to public interest information in Moldova’s courts, targeting state institutions which refuse to provide information of public record. Each of LHR’s legal victories has a life beyond the specifics of the given cases, creating important legal precedents that will continue to govern the behavior of government agencies far into the future.

LHR’s Vreauinfo.md platform aims to facilitate submission of FOIA requests by journalists and other members of Moldovan society. The platform engages citizens to make use of Moldova’s Access to Information Act by helping to lower the barriers that prevent citizens from requesting information from those in power.

On November 24, 2020, Freedom House held the third annual Media Policy Forum as part of the two-day Mass Media Forum organized by API and the Press Council. This year’s forum took the form of a virtual media policy roundtable on the topic “A Chokehold on Media Freedom: Navigating Law and Policy Restrictions under Pandemic Conditions.” At the roundtable, participants highlighted the impact of COVID-19 on media freedom across the Europe and Eurasia region and drew lessons for the Moldovan context. Participants from Moldova, Latvia and Ukraine shared perspectives from civil society, media and policy-making spheres, and identified policy solutions that maintain respect for international standards on free expression while addressing security and health concerns posed by the global pandemic. This year, the Mass Media Forum took place in a mixed online-offline format. The full event agenda and registration details are available here.

The next Media Policy Forum will be held in summer 2021.

The Forum was made possible in partnership with the Black Sea Trust for Regional Cooperation and the Friedrich Naumann Foundation of Southeast Europe with support from USAID Moldova, UK aid and Internews in Moldova under the MEDIA-M project.

The competition for the current round of Media Freedom Matters grants is now closed. For detailed information on the  most recent competition, please click here.

The 2020 competition for the sixth round of “Media Forward” policy brief authors is now open. To learn more about how to apply, please click here. Applications must be received by 23:59 EST on January 25, 2021.

Media Policy in a Pandemic: Lessons from Moldova, Ukraine and Latvia

The authors examine and compare government approaches to media policy in Moldova, Latvia, and Ukraine in the context of the COVID-19 pandemic, highlighting independent media’s crucial role in contributing to an effective national health crisis response.

Privacy and Freedom of Expression in Moldova: A Dangerous Imbalance for Journalists

Balan and Stegniy’s brief analyzes the effect of the COVID-19 pandemic on media freedom in Moldova, highlighting the troubling new opportunities the pandemic has provided authorities to stifle the press and the new burdens it has placed on independent media outlets.

The Fourth Estate in the Making: Regulation and Reform of Media in Moldova

Why Access to Information is Still a Problem in Moldova

By Victor Gotișan with Natalia Ionel

Ionel and Gotizan’s brief analyzes the state of freedom of access to information in Moldova, identifying political, bureaucratic and legislative obstacles facing journalists and citizens.

A Human-Centered and Human Rights-based Approach to Media Work

The Mixed Electoral System: A New Challenge for Audiovisual Media in Moldova

"Moldnet" and the 2019 Parliamentary Elections

The More Things Change, The More They Stay The Same

Transnistria's Media in Times of Change

Media Pluralism and the Concentration of Ownership in Moldova

Seize the Press, Seize the Day: The Influence of Politically Affiliated Media in Moldova’s 2016 Elections